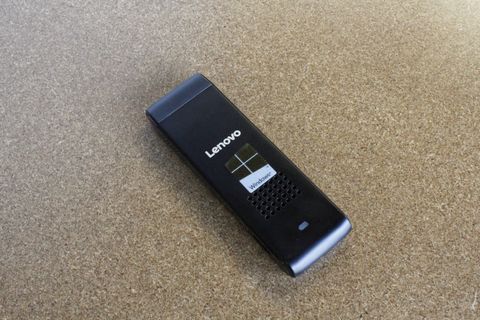 The Lenovo IdeaCentre Stick 300 is one of the smallest stick PCs on the market, with an attractively small price to go with it, but the performance is a bit lackluster, and it would be greatly improved by a second USB port.

The Lenovo IdeaCentre Stick 300 ($99.99) is the Lenovo's take on the stick PC, introduced and popularized by Intel in 2015 with the original Compute Stick. The idea is simple and intriguing: a capable Windows PC running on an Intel Atom Processor with minimal hardware. It's small enough to slip in your pocket, powerful enough to run Microsoft Office and inexpensive enough to give as a stocking stuffer. But while Lenovo's own stick PC closely adheres to the template laid out by Intel, the category has continued to grow, and the Lenovo IdeaCentre Stick 300 isn't as impressive as some alternatives.

The IdeaCentre Stick 300 is similar in many respects to the Intel Compute Stick. It's a small, pocket-size stick PC, with an HDMI connector on one end that can be plugged directly into a monitor or TV. The PC itself is powered off of a micro USB connection, so you can plug it into a TV or monitor and get it running off of the display's own USB ports, without occupying another wall outlet.

You use a small power button on the side of the little PC to power the IdeaCentre Stick 300 on and off, with the status indicated by a blue power button. The small chassis is made of black plastic and has ports along the outside edge of the small, candybar-shaped computer. The whole thing measures 3.94 x 1.50 x 0.59 inches and weighs 2.3 ounces, making it smaller and lighter than most smartphones. It's small enough to slip into a pocket or purse, and it comes with a short HDMI extension and USB cord for power.

You will need to provide your own display (a monitor or TV with HDMI input) as well as a keyboard and mouse. Since the IdeaCentre Stick 300 has only one USB port, you'll need to either use a keyboard and mouse combo through a shared wireless dongle, or add a USB hub to provide additional usable ports. The single USB port feels extra limiting when compared to what you get with competitors, like the Azulle Access Plus or the larger Kangaroo Mobile Desktop. They both offer two ports (one USB 2.0, one USB 3.0).

The Lenovo IdeaCentre Stick 300 looks extremely similar to the Intel Compute Stick, in that it has the same basic design. Out of one end is an HDMI connector, which can be plugged directly into the HDMI port on the back of a TV or PC monitor. This is covered with a rounded, plastic cap. On one side of the tiny device is a power button, a micro USB port for power and a USB 2.0 port. On the other side of the tiny chassis is a microSD card slot for adding storage to the system's limited 32 gigabytes. Aside from those ports, the chassis is perforated with vent grilles to provide passive cooling to the internals.

The IdeaCentre Stick 300 is equipped with an Intel Atom Z3735F processor, a low-powered quad-core processor that sips power and offers 1.33GHz speeds. As a 32-bit system, the CPU can support only 2GB of RAM, which is included. While streaming 720p video on YouTube, I was able to open up other browser tabs and read some news articles alongside the video, but with only five tabs open, the system lagged considerably.

The IdeaCentre Stick 300 took 21 minutes and 46 seconds to complete our spreadsheet macro test, which matches 20,000 names with their addresses in OpenOffice. That's several minutes slower than the IdeaCentre's peers; the second-gen Intel Compute Stick (18:00) and the Kangaroo (17:56) were nearly 4 minutes faster, while the Azulle Access Plus (16:47) had nearly a 5-minute lead.

For storage, the system uses a 32GB eMMC card — essentially a board-mounted microSD card — which is already half-filled by the operating system. Fresh out of the box, the IdeaCentre offers about 14GB of free space. It took 1 minute and 49 seconds to transfer our 4.97GB folder of mixed-media files, for a rate of 46.69 MBps. That's significantly better than the Intel Compute Stick's 20.6 MBps, and just slightly ahead of showings from the Kangaroo (42.06 MBps) and Azulle Access Plus (41.04 MBps).

When it comes to graphics performance, we didn't have high expectations for the Atom processor's integrated graphics solution, but it still manages to fall behind the competition, with a score of 11,051, lower than showings from the Intel Compute Stick (15,329), Kangaroo Mobile Desktop (16,037) and Azulle Access Plus (18,805). The IdeaCentre will do just fine for simple tasks like streaming video or rendering web pages, but that's about it

Cramming even a low-powered PC into such a tiny package does raise some concerns about heat, and after 15 minutes of streaming video, the pocket-size IdeaCentre Stick had external temperatures of up to 110 degrees Fahrenheit. That's warm enough that you may want to let the stick cool a bit before you unplug it from your TV and slip it into a pocket.

The IdeaCentre Stick 300 comes with Windows 10 Home preinstalled, but compared to other systems, it is refreshingly free of bloatware. It comes with Candy Crush Soda Saga, Minecraft for Windows, PicsArt and Flipboard. Lenovo adds a digital user's manual and an online support tool.

Lenovo covers the IdeaCentre Stick 300 with a 90-day warranty that includes mail-in repair service. That's a mighty short period considering that other, similar products are covered for a full year.

The Lenovo IdeaCentre Stick 300 is an inexpensive and appealingly small option for anyone who needs a PC for use on the go, running digital signage, or adding PC-based web browsing and streaming to a TV. The price is equally attractive, giving you that capability without going into triple digits. However, others offer slightly better alternatives, namely Intel's own Compute Stick and the Azulle Access Plus, which provide better processing and slightly larger port selections. If even small performance gains are important to you, opt for one of those alternatives. If not, however, the Lenovo IdeaCentre Stick 300 is easy to recommend to anyone who is curious.