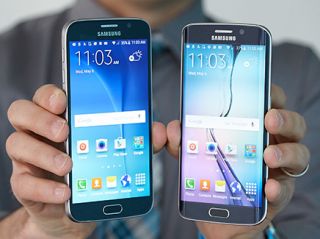 The decision to buy the S6 or S6 Edge really comes down to two things: how much you like the design of the Edge and how much extra you’re willing to pay for it. Practically speaking, the S6 is the better deal, as you get the same great 5.1-inch quad HD screen, fast octa-core processor and 16-megapixel camera that outshoots the iPhone 6 for $100 less. But if you want the best-looking phone on the market - and you wouldn’t mind some extra battery life to go along with it - the S6 Edge is the smartphone I’d choose.

Here's what you need to know before you buy.

While both the S6 and S6 Edge are made of glass and metal, only the S6 Edge has a dual-curved display. The look is futuristic and stunning, making the S6 appear flat and a little boring by comparison. The regular S6 is just as solid and has a premium feel, but it doesn't grab your attention like the Edge.

The one downside to the S6 Edge's curved display is that you can sometimes accidentally press the screen because there's less of a bezel.

The S6 Edge offers just a few features to take advantage of its curved screen. For instance, from the home screen you can slide your finger in from the edge to see your favorite contacts, each of which is assigned a color. If you happen to place the Edge upside down on a table, you'll see the Edge display glow that hue when one of those contacts dials you.

One of the features I like most about the S6 Edge is that the curved screen doubles as a clock when the rest of the display is off. And it's dim enough to keep by your bedside without being distracting.

Less impressive is the Edge screen's news ticker function, which scrolls headlines and scores from Yahoo, as well as the latest Twitter trends. It's not worth the effort.

Winner: Galaxy S6. The curved screen on the Edge doesn't do enough.

Winner: Galaxy S6. If you're paying $100 extra up front, the premium doesn't seem worth it, but it's easier to justify when broken up in monthly installments.

If you look at our round-by-round results, the S6 Edge and S6 split with two rounds apiece. However, the S6 Edge still wins in my book. It offers a better design and longer battery life in a thinner and lighter form. Even though the Edge doesn’t do much with its curved display and costs at least $100 more, to me it’s worth the premium, because it lasts longer on a charge and looks better doing it.