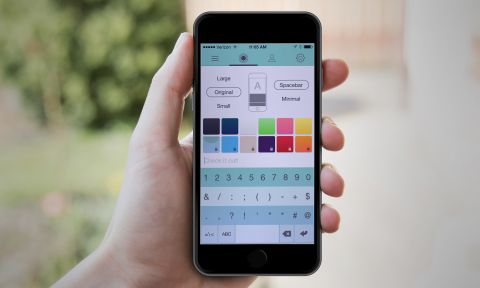 Power users who don't mind a bit of a learning curve will appreciate the capabilities of the Fleksy Keyboard for iOS.

Fleksy, one of the legion of alternative keyboards now popping up for iOS devices, bills itself as "a keyboard experience like no other." In some senses, that's true, though probably not in the ways Fleksy's developers would prefer you to notice. This app uses a number of gestures to make typing faster, but its learning curve is steeper than that of other third-party keyboards. Is it worth the investment in time and money?

After downloading Fleksy, add it as one of your available keyboards via Settings (under General > Keyboard > Keyboards > Add Keyboard). Like other third-party keyboard apps, Fleksy requires you to grant it full access in iOS' settings so that you can take full advantage of its features. That means that some of what you're typing ends up getting sent to Fleksy, so that it can adjust its predictive typing engine to reflect words you commonly type.

In addition, you can link up Fleksy with your Facebook, Twitter and Gmail accounts to further personalize your dictionary. (I was able to tie in Gmail without an issue, but my attempts to tap into my Twitter account ended in an error message with no instructions on what was causing the problem.) Privacy-conscious users may balk at giving their keyboard that kind of info , but the data is collected anonymously, and it never captures sensitive information like passwords or credit card numbers.

Fleksy gives you a choice of six themes — essentially a range of different-colored keyboards. You can expand your color palette by paying 99 cents for six additional looks. The more useful option is the ability to toggle between large, midsize and small keyboard layouts. The large format, in particular, will be a welcome sight to users who struggle with the tiny keys on their iPhone. If you're looking to free up more screen space, Fleksy's smaller-size keyboard is also a little bit more useful than the scrunched-up version offered in the Minuum keyboard app.

Unlike the Swype or SwiftKey keyboards — both of which allow you to drag your finger around an on-screen keyboard to form words — Fleksy makes you type out letters on a traditional QWERTY keyboard. The difference, though, lies in Fleksy's predictive engine: As you type, the keyboard app figures out what you meant to say and adjusts any errant keystrokes to form the words it thinks you're trying to write. And more often than not, Fleksy settles on the right word, even as your hapless fingers strike one wrong key after another.

But there are limits to just how clever Fleksy is. As I tested this keyboard, I found that it was particularly vulnerable to short words where I wound up inadvertently hitting an extra key. If I typed "ifg," for example, Fleksy was pretty much stumped, to the point where "if" wouldn't even appear as one of the suggestions I could select to replace my mistaken keystroke. In those instances, I would have to delete the whole word rather than just the one incorrect character and start typing again.

Predictive typing is only part of the story with Fleksy. The keyboard also relies heavily on gesture controls to save you keystrokes. Swipe to the left to delete what you just typed, swipe right for a space and swipe to the right again to bring up a period. Have some other punctuation in mind? Swipe downward to cycle through a comma, question mark, exclamation point and other commonly used pieces of punctuation. (The downward swipe is also how you cycle through Fleksy's list of suggested words.) Swipe two fingers downward to make the space bar go away and give yourself some slightly larger keys to work with; a two-finger upward swipe brings it back. And if you hold down the Enter key, you can summon up an extensive menu of emoji, if that's how you prefer to communicate.

Some of the gesture controls are quite useful. The leftward swipe to delete is a lot more convenient than tapping repeatedly on a Backspace key, and if you really want to undo what you've typed, swipe left and hold down your finger for a very handy speed-delete feature. Still, the swipes and gestures take some getting used to. I often found myself struggling to remember Fleksy's assorted controls and sneaking a peek at the company's FAQ.

With Fleksy, I averaged 22.2 words per minute using the iPhone Typing Test. That's better than my average among all third-party keyboards (19.7 wpm), but it's behind the best scores I tallied with Swype and SwiftKey — 22.8 and 25.2 wpm, respectively, when using their predictive typing. Why was my score lower on Fleksy? Cycling through those punctuation marks using the downward swipe in Fleksy slowed me down.

On its App Store page, Fleksy developer Syntellia boasts that "you can type without even looking," thanks to the power of the predictive keyboard. I would not recommend this. I took one of the phrases from the online typing test — "To forget one's purpose is the commonest form of stupidity." — and tried to type it without looking at the Fleksy keyboard. The end result: "To forget iced phonics I'd the vknnbfxg vkvm kc cgnicmvn." Better keep those eyes on the keyboard for now.

Fleksy does feature a voice feedback setting that repeats words after you've typed them or as you cycle through suggestions with swipe gestures. Enable that feature, and it's much easier to type without looking. It also makes Fleksy a potentially appealing keyboard for visually impaired users.

Fleksy is a powerful utility that will appeal to anyone who doesn't mind a bit of a learning curve. Users who are less eager to learn a new method of typing will probably be better served by other alternatives, such as SwiftKey or Swype, which offer faster speeds overall. But power users who don't mind putting in the time to learn Fleksy's assorted gestures and controls will find this a definite improvement over the built-in iOS 8 keyboard.