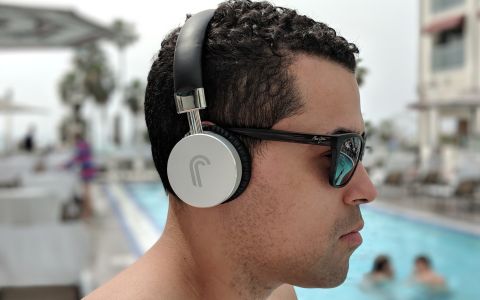 For over 20 years, DirectSound has been a staple of professional audio equipment and noise-isolation technology. Now the company's set its sights on the Beats and the Boses of the audio world with the launch of its own consumer brand, Fanstereo.

The mission: offer high-quality, sub-luxury headphones at a cheaper price. With the release of the Fanstereo Studio43, the company offers the multifunctionality and sound quality you want from a pair of midtier, on-ear Bluetooth headphones – so long as you can accept some imperfections.

Unboxing the Studio43 was a delight. My girlfriend and I admired its luxe appearance and elegant materials, especially when taking affordability into account. The headphones have a sleek, sturdy look not many on-ears in its price range can match.

The Studio43 headphones are built with ergonomics in mind. The headband is dressed in soft-touch leather that feels as premium as it looks and comes super-bendable to where you can nearly straighten it out without breaking it. Also, I found the leathery foam ear cups to be a chic touch. All the buttons are on the exterior of the right ear cup and placed closely together for operational convenience. The aluminum-housed ear cups produce a nice shine factor that blends perfectly with the stainless-steel extenders.

The headphones have a sleek and sturdy look that not many on-ears in its price range can match.

My only issue with the aluminum housing is its sensitivity to scuffs. When tossed in my backpack, the headphones rubbed up against my aluminum water bottle and left a mark near the USB port. Even though the ear cups are designed to rest the Studio43 on any flat surface, I would be leery of doing so on materials like brick or steel.

Fanstereo is currently offering the headphones in two colors – Silver and Camel – both maintaining the aluminum ear-cup casing with different colored headbands. Other exclusive editions, like Gunmetal and Raspberry Copper, are sold out, but we’re hoping they come back in stock because they look pretty sweet.

Weighing 7.5 ounces, the Studio43 headphones are fluffy and pleasantly light to carry around. You won’t feel fatigued wearing them around your neck. The ear cups are plush, and rest nicely for a length of time, whereas the padding on the headband is cushiony for a comfortable fit on the head.

The extenders stretch the headphones at a reasonable length for extra breathability, and secure a tighter fit for those who favor snug. When running around the city, they didn't move out of place until I turned my head aggressively to check for oncoming traffic. It's good to know they'll stay put when bumped several times in congested environments, like a New York City subway car.

Still, the one gripe most people have with on-ear headphones remains: inconsistent comfort. The Studio43 ear cups serve better for short-term listening, as they tend to apply extra pressure on your ears and pinch the cartilage over time. Wearing them for more than an hour can cause discomfort.

The Studio 43's multifunctional features steal the spotlight. Fanstereo succeeded in integrating several commands into a three-button scheme. Each one is capable of executing several tasks and is programmed to simplify the learning curve of operation.

The more advanced features are reserved for the MF button. Besides controlling media playback, it allows you to answer/end calls (one press), reject calls (hold down for 2 seconds), and redial (press button twice). Holding down the volume buttons simultaneously will initiate a mute mode to silence calls. Each volume button raises and lowers sound with a slight tap, plus changes or restarts a song when held down for a few seconds.

MORE: Buying Headphones in: Pros and Cons of Every Type

A voice-command feature is integrated into the headset, too, but is limited to answering or declining calls by speaking "yes" or "no" into the built-in mic. Personally, I think the headphones would benefit more from extra voice commands for playback management and digital assistant (Google Now and Siri) interaction.

Fanstereo engineered these headphones to hear music the way it's produced in the studio. Powered by the company's patented High Precision Audio and proprietary passive isolation technology, the Studio43 headphones deliver a clean and spacious soundstage, although the bass can go a bit haywire on loud settings.

Giving a listen to Migos Culture IIexposed its  struggles with bass. The response on songs like "Stir Fry" and "Superstars" came off muddy. I figured switching to something lighter with bombastic vibes like Filter's "Take My Picture" would highlight the lows better, but the results remained the same. Much of the distortion in the bass took away from the song's melodic hook and strings. Luckily, that's the only audio problem I encountered.

The Studio43 headphones deliver a clean and spacious soundstage, although the bass can go a bit haywire on loud settings.

Listening to artists with distinctive vocal tones like Torii Wolf – a musician oft-compared to Bjork – showcased the mids and highs on the Studio43. Playing a record like "1st" better detailed her vocal tones and reverbs, giving the Fiil Canviss and Bose Quietcomfort 35 II a run for their money. Jimi Hendrix’s rendition of "All Along the Watchtower" gave life to the highs and exhibited background instruments like the vibraslap.

Noise isolation is another area where the Studio43 headphones perform better than the competition. Placing them on my ears formed a strong seal to keep background noise to a minimum. The headphones maintained their high-fidelity response when watching Netflix videos in a noisy household. Very rarely did I notice a fracas unless it was something exceptionally loud, like a vacuum passing through the hallways. I wasn't fazed by it, nor by  any other loud commotions.

Fanstereo claims that its headphones can last up to 13 hours on continuous play with about 300 hours on standby time. This is lower in comparison to other on-ear models like the Beats Studio3 and the Fiil Canvas.

My test run saw up to 12 hours of usage, which was ideal for a week's worth of active listening. Extra playing time would have been great, but knowing I could fully charge the headphones at my desk in under 2 hours was reassuring.

The Studio43 headphones offer a wider Bluetooth range than other headphones, operating within 35 feet of connected devices. I roamed around my apartment during conference calls, interference-free. Stepping out of range caused some minor dropout at times, but I noticed connectivity held up well when accessing my mailbox one floor below, so the headphones are capable of operating at a 40-foot range.

User-friendly controls on a headset don't always translate to good call quality. Most callers were able to hear me fine in quiet areas, but the mic didn't do the best job of picking up vocals, and required me to raise my voice. I was able to hear my girlfriend clearly, but she noticed my voice would go in and out during conversations. There was also the echoing my friends mentioned when putting me on speakerphone.

The Fanstereo Studio43 headphones aren't perfect, but despite certain compromises made to the internals to optimize performance, these wireless headphones get more right than they do wrong. Gorgeous aesthetics, intelligible features and solid audio performance make these impossible to overlook.

I found the High Precision Audio technology delivered good sound resolution with some great mids and highs. Noise isolation is just as impressive, allowing me to detach from the world on my morning commutes. The flashy design also stands out to disguise these as luxury headphones. However, you might want to look elsewhere if you're constantly using your cans to talk on the phone. It also would have been nice to get a bit more battery life.

At $139.99, the Fanstereo Studio43 is a steal for those looking to upgrade their on- or over-ear headphones on a budget.