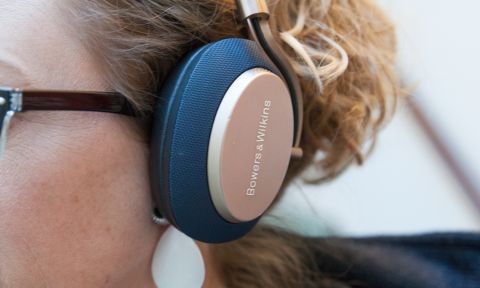 The Bowers & Wilkins PX Headphones provide a showstopping design bursting with tech, including smart sensors and adjustable active noise cancellation with up to 22 hours of battery life.

Bowers & Wilkins is bringing its premium touch to wireless headphones. The $399 PX headphones are the company's first Bluetooth cans to feature active noise-cancellation technology, and offer smart sensors for automatic pause and play. The PX headphones also have a companion app that allows quiet-seeking music lovers the option of adjusting ANC modes as well as how much ambient noise the cans let in. The PX's premium price tag nets you great audio quality, up to 22 hours of battery life, and a pair of cans just as pretty as they are sturdy.

I gasped when I first laid eyes on the PXs and their sublime design. The outer ring of the ear cups and the top of the headband are covered with a navy-blue ballistic nylon that's as tough as it is beautiful. The look is amplified by the soft gold accents along the bottom of the headband, and on the extenders and caps on the ear cups and buttons. Soft, supple black leather lines the anterior headband and inner ear cups.

The cups are connected by powerful magnets for easier removal, which comes in handy if you need to reach the reset button underneath the right ear cup. Bowers & Wilkins also embedded a smart sensor into the ear cups, so when you remove one of the oval-shaped cups, whatever you're listening to will automatically pause and resume once you place it back on your ear.

All the buttons and ports on the headphones are located along the right ear cup. At the top rear, you'll see the volume and pausey/play buttons with the Environmental Filter and power/Bluetooth buttons directly beneath. At the bottom are ports for the included audio cable and the USB Type-C port for recharging the cans -- one of the only  headphones to have this feature.

I've worn the headphones for six weeks now, and they look just as good as when I first received them. This is despite repeatedly being tossed in and out of an overloaded book bag and an inadvertent encounter with a curious 3-year-old. And everywhere I've gone with the PX, I've had at least one person stop me to ask their brand and remark on their beauty.

For those moments when I had to cram the PX headphones into a bag, I appreciated that the ear cups can swivel so they can lie flat. The headphones ship with a snazzy quilted bag with an Type-C USB cable and an audio cord.

Wrapped in soft leather, the memory-foam ear cups are firmer than I'm used to on a headphone. I'd liken it to reclining on an orthopedic pillow instead of one filled with goose down. The cups fit comfortably over my ears, creating a reasonable seal. I say reasonable, because whenever I would move my head left or right a slight gap was created, triggering the smart sensors to pause my music. This is a problem that's easily remedied in the companion app (more on that later).  Still, I've worn the PX for over 5 hours on a cross-country flight without any discomfort.

The PX headphones weigh 11.8 ounces, compared with the 8-ounce Bose QuietComfort 35 II. But the weight difference is to be expected with the former's use of higher quality materials -- particularly with the metal.

Pairing the PX to my Samsung Galaxy S8+ and my Galaxy Note 8 was a snap. Sliding the power/Bluetooth button downward for 2 seconds places the cans in pairing mode. From there, I just went to my Bluetooth settings in my phone, hit pair, and I was ready to rock 'n' roll.

The free PX app (Android, iOS) is modeled after the hardware in that it's clean, nice to look at and relatively easy to use. When the app launches, it automatically syncs  with the headphones. Once paired, you can access the trio of active noise-cancelling presets: Office, City and Flight.

Enabling Environment Control determines what kind of ambient noise the headphones will block out. For example, City Environment Control will automatically filter out most of the hustle and bustle of a busy New York City street, while Office blocked out any chatter in the office except for my colleagues who were directly to my right and left.

I gasped when I first laid eyes on the PXs and their sublime design.

The app also has a Voice Passthrough function that lets you adjust how loud the ambient noise that gets into the PX will be. When I was walking down the street, I pushed the slider toward Amplified, so I could stay alert to my surroundings. However, when I was on the subway, I turned the passthrough off so I could shut out the guitar solo from the guy trawling the cars, trying to get a little extra cash.

You can also change the sensitivity of the smart sensors embedded in the ear cups using the  Wear Sensor portion. I typically kept my setting on Normal, but when I got a hairstyle that interfered with how the ear cups sat on my head, I switched to High. But if the sensors aren't pausing the music when you remove the earcups, you should change it to Low.

I really like the way Bowers & Wilkins handles updates for the headphones. Instead of having to plug the cans into a computer, all I had to do was launch the app and hit the info icon to access the firmware update. From there, all I had to do was make sure the cans were situated next to the phone while the update installed, which took about 3 minutes. In the event the headphones go on the fritz, you can hit the factory reset button and start from scratch.

Something I wish the app had is a way to tweak the equalizer. I also wouldn't mind a way to adjust the soundstage, similar to what the Parrot Zik 3.0 headphones offer. However, Bowers & Wilkins says that it will be rolling out new features via the app in the future.

Each variation of the PX's active noise-cancelling creates its own quiet utopia. But as a city dweller, I found myself using the City present with disabled Voice Passthrough. It performed the best against the never-ending din of city living, including the subway; windy, traffic-choked streets; construction; and loud arguments. Now if I wanted to eavesdrop on said argument, I would set the Voice Passthrough to Natural so I could still listen to my music.

The Active Noise Cancelling performed well against the neverending din of city living.

As good as the PX's ANC is (and it is good), it can't compete with the Bose QuietComfort 35 II and its vacuum-like silence. Whereas I could hear faint whispers of conversation on the PX headphones with the Voice Passthrough disabled, the QC35 IIs were just a step below dead quiet with no music playing. Neither set of cans has that annoying hiss that some ANC headphones have due to integrated mics creating a negative frequency to cancel out ambient noise.

The PX delivers robust sound with nice detail and clean highs and mids -- something that can also be said of the QC35 IIs. Listening to several tracks on both sets of headphones, they were so on a par, I had to rely on tiny differences to declare a winner. On Bruno Mars' "Chunky," I could hear the strings on the bass more clearly on the PX than on the QC35 II. However, the lows on the QC35 II headphones sounded warmer overall. The vocals and synth keyboard were almost matched on both headphones.

When I switched to Astrud Gilberto's rendition of "Fly Me To The Moon," both headphones did a great job of establishing the soundfield. The piano accompanying the vocalist sounded like it was sitting to my left while the horns were to my right. The piano and horns were more pronounced on the PX headphones, as were the vocals. Details like the cabasa were present on the QC35 II cans, but the french horn was a bit muffled.

The PX delivers robust sound with nice detail and clean highs and mids.

On Kem's "Love Call - Main," the main guitar sounded bloated and was crowding the bass on the PX, which affected how well I could hear the bongos, snare and cymbal. The QC35 IIs had a slightly cooler sound, but I had no trouble hearing every instrument clearly, including the singer.

Bowers & Wilkins says the PX can last 22 hours on a charge with ANC enabled. I was able to use the headphones for 19.5 hours, which translated to two weeks of usage. That included my 35-minute commute to work,  errands, after-work events and a 5-hour plane ride. You can check how much battery life the PX headphones have left in the app, or wait until they start sounding their warning beeps. Bose estimates that the QC35 II headphones last 20 hours, but we managed to squeeze out 22 hours.

MORE: Buying Headphones: Pros and Cons of Every Type

The PX headphones have the typical Bluetooth range of 33 feet. The music started sputtering when I moved closer to stepping out of range, and cut out completely when I surpassed the limit. However, I appreciated that my track started playing as soon as I moved back into the acceptable distance.

The PX's call quality can use some work. On my end, the calls I made to my mother and brother sounded like we were all underwater. But neither my mom nor my brother complained about the sound. In fact, they said it sounded like I was just talking to them on the phone.

You get what you pay for. And in the case of the Bowers & Wilkins PX Wireless headphones, you're paying for quality. They're pricey at $399, but the headphones offer a gorgeous, sturdy design with great audio quality, solid active noise-cancelling technology and long battery life. When the headphones are paired with its free app, listeners have the ability to tweak what they hear and how much.

But if you're looking for absolute quiet, the Bose QuietComfort 35 IIs are without equal and deliver great sound quality. The $329 cans are still a bit expensive, but they're cheaper than the PX. They're also a lot lighter than the PX and come with a dedicated Google Assistant button. Still, if you're seeking pair of truly premium headphones, the Bowers & Wilkins PX Wireless headphones are the way to go.