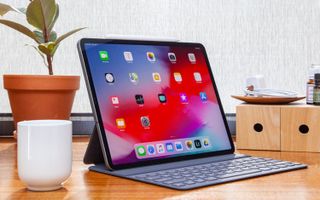 Cheap iPad deals aren't just for the holidays. Though we're now in the final week of January, there are still plenty of cheap iPad deals you can take advantage of. In fact, one of our favorite iPad deals from the previous year is back at Amazon and Best Buy.

If you need more power, the iPad Air is on sale for $459 at Amazon. That's $40 off, which is more than its usual $20 to $30 off. Unlike the base 10.5-inch iPad, the iPad Air uses a super-fast A12 Bionic chip, which races through any app you throw its way.  It's the iPad to get if you plan on doing heavy gaming with your iPad.

Generally speaking, Amazon, Best Buy, and Walmart are our go-to stores for cheap iPad deals. However, Walmart's iPad prices are pretty anemic at the moment. (They're actually charging full price for most models). So we're rounding up the best iPad deals below so you'll never have to pay full price again.

Now with a larger screen and Smart Keyboard support

The 10.2-inch iPad is Apple's newest tablet. Announced during its iPhone 11 keynote, the new tablet replaces the 6th-gen 9.7-inch iPad. However, like its predecessor, the 2019 iPad uses the same A10 Fusion chip, which although dated, still packs enough power for streaming movies and playing some Apple Arcade.

The new 10.2-inch iPad can be used for sketching and drawing, thanks to its Apple Pencil (1st gen) support. For the first time, you can also pair the 10.2-inch iPad with Apple's Smart Keyboard.

The iPad Air sports Apple's A12 Bionic CPU, which provides plenty of speed for photo-editing apps like Procreate and Pixelmator Photos. This processor can also handle more-traditional laptop-like usage as well. In our tests, we were able to smoothly open multiple apps and Safari tabs all while listening to music with Apple's Music app.

If you can afford it, this is the best mid-size tablet around. Bargain hunters take note: The iPad Air usually gets modest discounts of around $30. Anything larger than that is a rare — and excellent — iPad deal. Over the holidays, Best Buy and Target took $100 off the base iPad Air. That type of iPad pricing is not likely to resurface till the next major retail holiday — Amazon Prime Day.

Don't let its small size fool you. The new Apple iPad Mini (2019) is the most powerful small tablet you can find. It packs Apple's new A12 Bionic Chip, which means games like Injustice 2 will fly on this tablet. In fact, the new iPad Mini offers similar performance to that of the iPhone XS (which uses the same processor).

The 7.9-inch display is the smallest in Apple's iPad family, but it still offers super vivid and bright images. In fact, the iPad mini's display reproduces an excellent 135 percent of the sRGB color gamut, which is an improvement over the iPad mini 4 (99.8 percent). By comparison, the much cheaper Amazon Fire HD 10 hit 104 percent.

I personally own this tablet (I previously owned the iPad Mini 4) and the reason I recommend it is for its raw power and portability. Whether I'm playing Mario Kart, PUBG Mobile, or Mortal Kombat — games fly on this tablet. And it's small enough that I can take it to bed and use it to watch Netflix (without feeling like I'm holding a giant oversized tablet).

The only downside is that the iPad Mini doesn't see many steep discounts and on those rare days when it's on sale — you better act fast. Back in September, the 64GB model hit an all-time low of $323 ($77 off) for 24 hours via Rakuten. Otherwise, you'll find it on sale on Amazon or Walmart for $15 off. The 256GB model is usually $30 off via the same stores.

Laptop-like power at a premium price

The 11-inch iPad Pro is Apple's tablet for serious professionals. If you work with 4K video or spend most of your time editing high-res images, this is the tablet for you.

Unlike the iPad Air, it sports Apple's A12X Bionic CPU, which is the A12's big brother. The current-gen CPU packs four performance cores and four high-efficiency cores, and it includes a new GPU that offers twice the graphics performance of the A10X processor inside the (now expired) 10.5-inch iPad Pro.

Make no mistake, this iPad is excellent for gaming and viewing movies, but it's specifically designed for heavy duty tasks. Unlike its smaller brothers, the iPad Pro offers Apple Pencil Gen 2 support. The new Apple Pencil offers support for new touch gestures, like double tapping, and attaches to the side of your iPad for charging. Despite being a high-end tablet, the 11-inch iPad Pro is usually on sale. A good deal will take from $50 off (base model) to $250 off (512GB/1TB models).

Looking for deals on other Apple gear? Check out our guides to the best Apple deals.