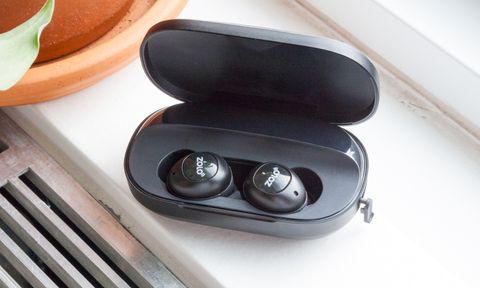 What the Zolo Liberty+ lacks in aesthetics, it makes up for in proficiency, with well-balanced performance at a bargain value.

When you think of wireless audio, Anker is probably the last name that comes to mind. Yet, despite its global domination of the mobile accessories market, the portable-charging goliath has stepped in to the audio gauntlet with the release of the Zolo Liberty+. While far from Red Dot Award material on the design end, these cordless receivers are solid entry-level earbuds that combine admirable sound with remarkable stability that won't break the bank.

One can tell that Anker designed the Liberty+ with durability in mind. The earbuds are coated in graphene, a cutting-edge nanosheet of carbon that's supposedly 100x stronger than steel and a fraction of the weight, while also meeting IPX5 standards for resistance against perspiration and water damage.

As great as the construction is, the earbuds aren't the most stylish that I've encountered. In fact, the only striking component of the Liberty+ is the bright yellow micro USB cable bundled in the packaging. The minimalist design with matte-black finish won't exactly appeal to sneaker-crazed hype beasts.

The charging case is pretty generic, too. The metal casing does give it a rugged presence but adds more heft to the product, to the point that it  might weigh down your jeans' pocket The magnet used to secure the clasp is a bit stronger than expected, as opening the lid requires extra muscle, and when you're done, it clamps down with force. The docking system is another poor design choice, as it's housed deep in the case and makes seating the earbuds on the charging pins annoying.

I can say that after several listens with the Liberty+, they're generally cushy on the ears. Much of this is attributed to the set of accessories, which includes three sets of silicone ear tips and four GripFit jackets designed to lock the earbuds in place. This combination of add-ons provides good in-ear comfort.

The Liberty+ are simple to plug in to your ears, and the company sketches a two-step tutorial on the inside sleeve of the packaging to simplify the task. Insert an earbud into the ear until it rests on the concha, then turn and lock to secure it. Some people might complain that the buds stick out more than others, but it's worth the trade-off.

Even though the buds were initially comfortable, I found that they loosened the more active I became. When running, I often had to push them back in. However, depending on your ear shape, you might get some of the good grips to remain intact during cardio workouts. Loosening aside, I never really found myself worrying about them slipping out when I was stepping outdoors for basic walks or chilling in bed playing NBA 2K18.

Pairing headphones to the Liberty+ isn't rocket science.. Taking the buds out of the case automatically powers them on. Enable the Bluetooth on your device and select the earbuds from the list of available devices. Listen for the pairing chime, and you're connected.

Even though the Liberty+ have only two buttons — one on each side — the earbuds do let you toggle several commands when you're pressing them. This includes answering calls, hitting play/pause, moving to next/previous song, activating voice assistant and enabling the sound isolation via the Transparency feature. Double tapping either earbud grants you access to Siri or Google Assistant, which can pick up audio commands competently to execute basic jobs like opening Spotify or sending a text.

Holding down either button for 3 seconds activates the Transparency feature, which turns on the earbuds' microphones so you can hear your surroundings better, though I found it works better when you're listening to music or a podcast. Using the feature alone picks up static and intensifies neighboring sounds, which can be unpleasant.

Execution of these commands sounds seamless, but that's not the reality here. Activating the controls can be cumbersome due to unreliable tactility. The left channel offers better clickability to rewind/pause tracks, whereas the right channel is super-stiff and makes forwarding and pausing songs frustrating. You're essentially pushing the earbuds further into the canal, causing discomfort.

The accompanying Zolo Life app (Android, iOS) is free and extends functionality by offering control of the same niche features you can manually activate on the earbuds themselves. You can toggle on the Transparency feature directly from your smartphone and assign the voice assistant of your choosing.

There is an EQ option, but it's limited to five presets (Pop, Jazz, EDM, Classical and Balanced) that slightly boost audio. The latter option seems to work best. It would have been dope if you could create custom sound profiles and tweak EQ settings similar to what you can do with the Jaybird MySound app.

Probably the app's most underrated feature comes in the form of Anti-Loss, which shoots out a notification when the signal connection is weak. This will definitely improve stability when  you're far from a connected device.

I tested the Liberty+ against others in its price range (and higher) and across different media formats. The earbuds produce a respectable soundstage suitable for everyday listening but can still benefit from some fine-tuning.

Pushing its bass levels up another notch using the EQ, a listen to LL Cool J's "The Boomin' System" showed that the Liberty+ can hold its own, especially when the buds have a good, tight seal. Any bit of looseness can dull and flatten audio. Volume is on-point and lets you listen to most bass-heavy records at maximum volume without hurting your eardrums. It's not as ridiculously rumbly as most Beats earphones, and that's a plus.

Tapping deeper into the Liberty+ soundstage, I found vocal clarity wasn't the product's greatest strength. Where the Bose SoundSport Free excels, the Liberty+ struggles to keep vocals clear and wispy. This was noticeable when playing power ballads such as Led Zeppelin's "Stairway to Heaven" or U2's "With or Without You." But it's no real deal-breaker, unless you're a hard-core audiophile.

Luckily, vocals do get a slight boost when you're playing video content — Netflix films in particular. You can watch something like Goodfellas — a movie that masterfully highlights music and puts it in historical context — and clearly make out the songs playing in the background during monologues. The same can be said with every official Black Panther trailer in existence.

While latency wasn't a major issue, I did notice a tiny bit of lag when viewing videos stored on my MacBook. Nonetheless, this won't ruin your overall listening experience.

Taking calls on the Liberty+ was a slightly better experience than doing so on the Soul X-Shock, though that's not saying much. I often had to speak louder when chatting with friends  thanks to the super-sensitive mics. These    picked up almost any ambient noise. Similar to other totally wireless earbuds, the Liberty+ buds switch to momo during calls, so you're left chatting and listening through the right earbud only.

MORE: 12 Cheap Headphones (Under $30) Ranked From Best To Worst

Anker's pedigree as a battery manufacturer means that expectations are high for the Liberty+ earbuds. I wasn't expecting the Liberty+ to set the standard for battery life on wireless earbuds. Then again, I did expect this to be the product's strongest vertical.

Anker claims the Liberty+ will last up 3.5 hours on a charge. That wasn't too far off the mark, as the buds lasted t 2.5 to 3 hours before I needed to recharge. When you're running low on power, the charging case can provide multiple charges, enabling 48 hours of playback.

The buds can recharge quickly, taking less than an hour to reach a full charge. That's double the capacity of the Apple AirPods, but 2 hours less than what the Soul X-Shock advertises.

Acceptable battery life aside, the Liberty+ possess a powerful wireless communication framework that produces incredible connection strength. Not only has Anker integrated an LDS antenna into the product, which is the same technology used in satellites and drones, but it also tacks on Bluetooth 5.0 to amplify and stabilize signal strength. The range held up better than I anticipated, letting me move from my apartment to my rooftop (keep in mind I'm one floor below it) and enjoy music minus any performance hiccups.

The $149.99 Zolo Liberty+ is a smart value-buy that serves up practical, if uninspired design with good audio performance, solid battery life and stellar connectivity. However, constant slippage and moments of discomfort from pressing the buttons on the earbuds keep the Liberty+ from earning a higher score.

If you're looking for a more stylish pair of truly wireless buds, we recommend the Bose SoundSport Free ($199.99). These buds offer an eye-catching design and are extremely comfortable, with excellent audio quality. But those willing to compromise style for substance will find that Anker's earbuds give them favorable results and save them a few bucks along the way.