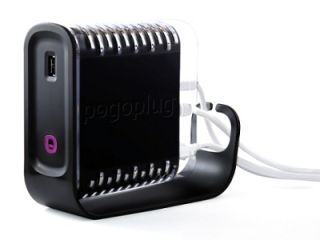 Looking for a way to share your files form one central location, via your network or the Internet?

One relatively new option is to invest in a “Plug Computer”, a common name for a relatively new type of small, energy efficient computer. Plug computers first hit the scene in early 2009, when companies like CTERA, Cloud Engines and Marvell committed to releasing new low-power, small form factor (SFF) computers that would focus on data backup. While the hardware has been around for about two years now, the included software has now evolved into something more than just a data backup service. Printer sharing, social networking, smartphone connectivity and dozens of other applications are now being included (or at the very least can be downloaded from an app portal).

Some of these plug computers are about the size of those lamp timers that you plug into an outlet (or a Clapper, if that's a more hip analogy), while some are slightly bigger, resembling a network router. They are meant to be headless—meaning no monitor, keyboard, or mouse—and used remotely.

Plug Computers can serve many purposes, the biggest of which is creating your own personal cloud, allowing you to access your files, printers, and other services from anywhere on the Internet using PCs and mobile devices. They are basically a low-cost and energy efficient alternative to using a traditional server, such as Microsoft’s Windows Home Server. They can be used for personal use, to access your files when at work, school, or traveling. They can also be used to share and collaborate among your family, friends, or small business.

Plug Computers can be preloaded with a Linux OS and the vendor’s software that integrates it with their third-party apps and services—which is the type we’re going to discuss. Alternatively, you can buy a bare Plug Computer with no third-party integration and use a Linux OS and applications. Keep in mind; you can also usually access the core Linux OS on devices powered by third-party services for further customization.

There are several solutions or devices you can use to create your own personal cloud. In addition to reviewing two Plug Computers, we’ll discuss some alternatives, such as Network-Attached Servers (NASs) and network drives, routers with USB storage, and home servers.