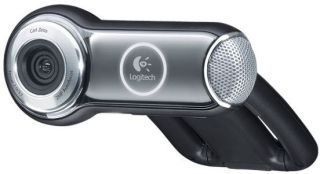 For those who do remember and did prefer it that way, Logitech is offering an alternative. The company has launched its first Mac-Only webcam, the QuickCam Vision Pro for Mac.

Logitech claims that it’s compatibility with iChat and Skype means users can enjoy “VGA-quality video at up to 30 frames per second – four times as sharp and twice as smooth as any other video calling solution” and that the Carl Zeiss lens means ensures users will get superior sharpness in a compact, lightweight design.

So what exactly are you getting for your buck? The QuickCam is capable of shooting 2 mega pixel still shots, which is the equivalent of what you’d get with a decent cell phone camera. Video clip resolutions are 720p at 960-by-720 pixels. The webcams also incorporates Logitech’s RightLight technology that auto adjusts the lighting of the camera depending on how dark the room is and has a built in microphone.

The QuickCam comes in black and silver and is available for €129.99. You should start to see it from the beginning of July, which means you might be able to nab one of these from as early as next week.