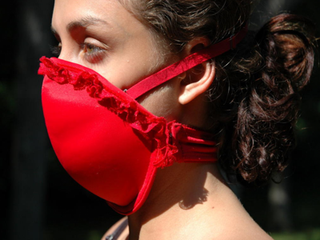 A bra is very good at what it does, but if you want to recycle one, you'll have to get creative. There are just not a lot of uses for a bra, other than to provide scaffolding for a lady's tatas, of course. However, we live in a world filled with very creative people. Surely one of us can come up with a multipurpose bra?

Well, it turns out one of us has already come up with a bra that doubles as something else, and its not something trivial like a slingshot or ear-muffs. CNet reports that Dr. Elena Bodnar will next Tuesday unveil her now commercially available Emergency Bra, which doubles as breathing apparatus for two people.

Bodnar made headlines last year when she won an Ig Nobel award for her invention, which she says was inspired by the devastating effects Chernobyl's 1986 nuclear disaster had on Ukrainians. The bra separates and can be used as two masks which filter out particles that were found to be as harmful as radiation in Chernobyl. This year, Bodnar's Emergency Bra is hitting e-shelves and can be purchased in a sexy red for just $29.99.

Before you scoff and write this off as a waste of money, remember that you are only as safe as your bra-wearing wife/girlfriend/friend/sister. I'll be over here, protected from all kinds of nuclear disasters, while you eat your words about how I shouldn't have spent thirty quid plus shipping on an EBbra.