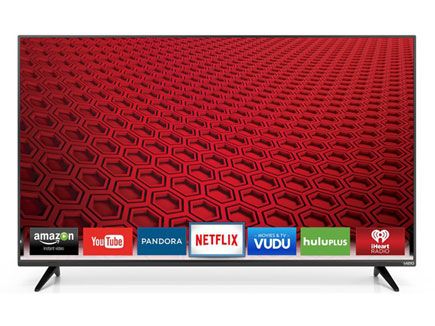 The E-Series is an excellent HD set for price-conscious buyers looking for a crisp picture with good contrast.

Editors' Note: If you want to spend less, the Vizio E50-C1 is also available in a 50-inch size with all of the same features.

Although Vizio is gradually moving to an all-4K lineup of TVs, it hasn't completely abandoned standard HD. The E-Series is its value line — and perhaps its last HD line — and is an excellent bargain for anyone looking to replace a set today.

The 55-inch E-Series E55-C1 is just $630 but offers several features usually reserved for models costing several hundred dollars more. It has built-in Wi-Fi and the usual basic smart-TV features for streaming services such as Netflix. Its most noteworthy feature, however, is its full-array LED backlighting, which divides the screen into 12 separate zones that can be dynamically dimmed or brightened. It generally makes for better contrast, particularly in scenes with both dark and bright elements.

The most significant exterior design change Vizio has made this year is to abandon its shaky silver center oval tabletop stand in favor of separate feet mounted at each end of the panel. It's a welcome change, and a much more stable design. (The old one tended to teeter.) On the other hand, it means the E-Series set can't be placed on top of a sound stand or box, and fitting a soundbar beneath the screen is difficult because the legs are only about 2.5 inches high.

As electronic furniture, the 55-inch E-Series blends nicely into the background, with a glossy black bezel and the Vizio logo no longer dangling below the lower-right corner of the screen. The set is also relatively slim — just a little more than 2.5 inches thick — which is a benefit if you decide to mount it on a wall.

This E-Series model comes with a sufficient array of connections: three HDMI ports, Ethernet and USB jacks, and component and composite video inputs. There are also analog and digital audio outputs.

MORE: Top-Rated Televisions From 32 to 70 Inches

With its full-array LED backlighting, the 55-inch E-Series set's deep blacks were readily apparent compared to those on edge-lit models, such as the comparably priced 55-inch Insignia Roku TV. While models that lack full-array backlighting tend to look gray when a black screen or the black bands of a letter-boxed image are displayed, the E-Series screen looks dark and black.

The effect translates into better contrast in scenes with light and dark objects, such as those in the science-fiction movie Gravity. The white space suits looked crisp against the blackness of space, without creating an artificial halo effect around the astronauts. The Blu-ray disc of the movie proved that the E-Series could also reveal more details on bright reflective surfaces, such as the rivets on the satellite that Sandra Bullock's character is working on in the opening scenes.

For the best image results, I preferred the E-Series' calibrated mode. In its standard settings mode, the TV can be subject to extremes of contrast that tend to gloss over picture details. For example, 007's dark suit in the Skyfall Blu-ray looked flat and featureless in standard mode, but in calibrated mode, wrinkles and folds in the suit became immediately apparent.

Overall, the rest of the E-Series test results ranged from average to better than average. Color was saturated without blooming or losing details. If anything, the set leaned toward the green rather than the cooler blue end of the spectrum. In up-converting from a DVD of Skyfall, the set also handled the material with dexterity, avoiding any digitally generated artifacts in the picture. Games and text looked sharp, and did not show any appreciable latency or image lag.

One area where Vizio cut corners compared to premium sets is in the E-Series' audio. Adele's vocals sounded reedy and thin on the set, although there was enough volume to fill a modest- size living room. To compensate, there are only minimal audio adjustments available, aside from normal and surround modes; there are no DSP effects to recreate the sonic sensations of, say, a concert hall. There is volume leveling, however, as well as a five-band equalizer that can be used to boost the bass.

The TV showed similar audio deficiencies when playing YouTube music videos through the E-Series' own app. The sound of The Undertones, for example, came across as dull and lifeless, as though the audio were buried somewhere deep within the cabinet.

Not much has changed on the interface and connected TV services side of the E-Series set. Options for changing picture, audio and network settings pop out on the left side of the screen in a vertical menu. Most of it is self-explanatory and straightforward.

Hitting the remote control's "V" button twice invokes a gray screen with streaming services parsed into My Apps, Featured, and Latest Apps. You can also call up the most frequently used apps as icons across the bottom of the screen, including Netflix, iHeartRadio, Hulu Plus, and Facebook. All of the major streaming services are covered, thanks to the Yahoo Connected TV store.

The Vizio remote's design sticks closely to the same arrangement used in previous years. The wand-style infrared controller is laid out logically, with dedicated buttons for Netflix, Amazon, and iHeartRadio.

Compared to Bluetooth remotes that can direct a cursor on-screen with a flick of the wrist, the E-Series remote feels antiquated and unresponsive. For example, it can be awkward and slow to move around apps like the one for YouTube.

The 55-inch Vizio E-Series HD TV exemplifies the aphorism "you get what you pay for." It doesn't support 4K ultra-HD video or offer exceptional audio, or come with snazzy features like a video camera or a Bluetooth remote control. On the other hand, it delivers a very solid picture with good contrast, making it a bargain for anyone looking to purchase a reliable HD TV.