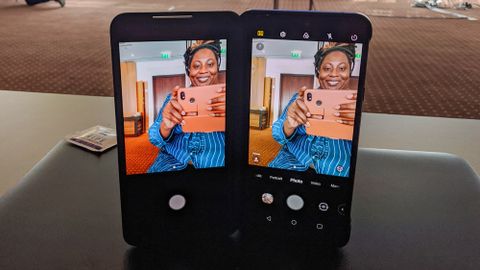 Folding smartphone displays are theoretically a cool feature. But as the Samsung Galaxy Fold has demonstrated, it's a risky gambit. LG has a different approach to the dual screen craze, opting for a detachable solution.

Confused? Then allow me to introduce the LG G8X ThinQ Dual Screen smartphone, a dual screen smartphone with a removable display. I had the opportunity to go hands on with this modular beauty during the IFA trade show in September, and while I'm not totally convinced in the phone's viability, I want at least a week to explore everything the G8x has to offer.

LG says the G8X ThinQ Dual Screen hits the U.S. on Nov. 1, with prices starting at $699. (Pricing looks like it's going to vary from retailer to retailer.) You can pre-order the phone starting Oct. 25.

The G8X has a lot of moving parts. First, you've got the actual smartphone. The Aurora Black rear panel houses a pair of cameras while the front of the phone is practically all display. In fact, outside of the small teardrop cutout for the front camera, the front is all screen. You’ll find volume and digital assistant buttons on the right side of the phone and the power on the left. Along the bottom, sits the USB Type-C port and a headphone jack.

But there's still the second display to consider. The extraneous screen is housed in a wraparound smartphone cover, hence the name Cover Display. The second display is nestled in the left side of the cover with a phone-shaped space on the right side. There's even a cutout for the rear camera.

The front of the Smart Cover is highly reflective. But if you can get past the glare, you might notice the 2 x 1-inch Notification Square that displays the time and any recent notifications without opening the Dual Screen.

With the cover attached, the Dual Screen weighs 11.5 ounces and 6.5 x 3.3 x 0.6 inches. It’s definitely substantial, but not so much I wouldn’t lug it around in my pocket.

The Cover display has a 360-degree hinge called the Freestop hinge. It allows you to maneuver the Cover Display into a number of useful positions. The hinge makes the overall frame thicker, but LG stuck with it instead of a 180-degree hinge to give consumers more versatility. Along the center of the hinge, you’ll find buttons for volume and power.

When two screens become one

This is actually LG's second take on a dual-screen smartphone. Earlier this year, LG showed off an add-on for the LG V50 ThinQ called the Dual Display (an add-on that never made it to the U.S., it should be said). In that instance, you'd clip the second display onto the V50 using pogo pins, but LG says it refined the processor after listening to users. The result is now a second screen that attaches through USB-C.

That makes linking the Dual Cover up with the G8X a bit like assembling a low-level Voltron. You simply slide the phone from the top down into the awaiting space. When positioned correctly, the phone connects to a USB Type-C input at the bottom of the cover and snaps into place. Need to ditch the Cover display for awhile, just put a little pressure on the rear panel to dislodge the phone and pull it out.

During the G8X's unveiling, LG's presenter made a very good point about the Dual Screen. You don’t have to take the second display with you every time you step out of the house. If you want to travel light, just leave the cover display and go about your business and when you’re ready for some extra screen, just pop the ThinQ in and have at it.

With the G8X ThinQ Dual Screen, you get not one but two 6.4-inch, 2340 x 1080 OLED displays. The displays are identical ,so hopefully as you use the phone and it ages, the screens will age at the same rate to keep the viewing experience consistent.

As it stands, both displays are absolutely gorgeous and just bursting with color. I can’t wait to get them under our colorimeter to discover the gamut and color accuracy. But whether I was playing Asphalt, catching up on our latest IFA coverage or taking a quick selfie, the panels were mesmerizing.

The twin displays are more fraternal than identical. The ThinQ’s panel has an in-display fingerprint reader while its sibling does not.

The G8X is more than a pair of beautiful displays (though they are beautiful). Running on Android 9.0 (Pie) the ThinQ is powered by a Qualcomm Snapdragon 855 CPU with 6GB of RAM with 128GB of onboard storage. Still need more room? You can expand it to a whopping 2TB via the microSD card slot.

From the Asus ZenBook Pro Duo and the HP Omen 2XS, I’ve been inundated with double-paneled gadgets of late. And while the concept seems outlandish, especially with the G8X, I’m really a fan of the multitasking. When I used LG's phone to browse on Amazon for a pair of shoes, I tapped the buy button only to have a new page pop up on the Cover Display so I could make the purchase on one side and continue browsing on the other.

In a bit of navel gazing, I pulled up Tom’s Guide on one screen and Laptop Mag on the other. And gamer that I am, I launched Asphalt on the main screen and the LG Game Pad in the other. Game Pad gives gamers the ability to create their own custom controls for each title, mapping the moves to the specific location on the main screen to the controls on the bottom. The result is in unobstructed view of top screen with simple to use controls

When both screens are activated, a small menu appears along the side of the main display. Expanding the menu reveals several dual screen options depending on the apps currently open. My favorite is Extended View which transformed the two screens become one massive one, complete with continuous scroll.

I only wish LG thought to throw a stylus into the mix and add some pen functionality. With that second display, my note taking could be a lot more efficient.

Two screens are definitely better than one when it comes to snapping selfies and taking pictures and video in general. The G8X is outfitted with a formidable 32-megapixel front-facing shooter that, when paired with the two screens, helped me take some quality selfies. The room I was in was fairly dark so I used Reflector mode which allowed me to adjust the lighting for a better outcome.

But make no mistake: the G8X's rear-mounted 12MP standard shooter and 13MP ultra-wide camera are no slouches either. LG included features like 4K Time Lapse and Steady Cam to makes sure you get some quality shots. And this is the first time, you’ll have the ability to switch between the front and back camera while recording video on an LG phone.

The G8X has a 4,000mAH battery, which is a bit on the small side considering its working for two. Although LG claims the Cover Display only consumes 20% to 30% more charge when it's enabled, that still means faster battery drain. Because the phone is Quick Charge 4.0 capable, it shouldn't take long to recharge. Still, I’m curious to see how the phone will hold up to our battery test.

Dual screens are the flavor of the month, but it’s up to companies like LG to make sure they outlast the initial fad. As it stands, I think this phone has a pretty good shot.

The LG G8X ThinQ Dual Screen smartphone combines power, functionality and a little creativity for an impressive device, at least for the limited amount of time I had with it. Multitasking feels natural, and the screens are simply beautiful. And you have the option of rocking a relatively normal-sized phone when you want to travel light.

I’m hoping that LG works out something with its wireless carrier partners, where you won't have to pay an arm, a leg and a baby to get your hands on the G8X, which would help make this outlandish concept feasible.

Follow all the announcements from IFA 2019 on our IFA hub page.