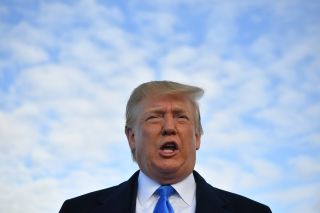 Update 6:56 pm ET: We have added more information about new tariff increases announced by President Trump with reaction from the Consumer Technology Association.

President Donald Trump "ordered" our "great American companies" to seek out manufacturing alternatives to China in a four-part Twitter thread on Friday, escalating the months-long trade war with the East Asian superpower.

Our Country has lost, stupidly, Trillions of Dollars with China over many years. They have stolen our Intellectual Property at a rate of Hundreds of Billions of Dollars a year, & they want to continue. I won’t let that happen! We don’t need China and, frankly, would be far....August 23, 2019

The tweets came after China announced retaliatory tariffs of 5% and 10% on $75 billion in U.S. imports — a direct response to Trump's plan to roll out duties on $300 billion in Chinese goods by Dec. 15.

The tariff hikes won't be music to the ears of tech companies if the reaction of Gary Shapiro, president and CEO of the Consumer Technology Association, is anything to go by. "Enough is enough," Shapiro said. "As evidenced by today's 623 point drop in the Dow, global markets are reeling on fears of a global recession. And today's announcement only inflicts more pain on American businesses, workers and families. The president is right to fight against China’s forced technology transfers and IP theft. But tariffs are taxes on Americans, putting us on the wrong economic path and compromising our global leadership."

It's unclear what legal authority President Trump believes he has to order U.S. companies from manufacturing in China, although the tweets capture his growing frustration with China amid the risk of a recession during his re-election campaign next year.

Much tighter delivery restrictions from China

Trump also ordered the U.S. package-delivery services, including the U.S. Postal Service and the private companies United Parcel Service, Amazon and FedEx, to "search for and refuse all deliveries of Fentanyl from China," which you can learn more about here. (Amazon now delivers nearly half of its own packages, after having relied on the USPS and private carriers for many years.)

Last week, President Trump seemed open to alleviating the impact of the trade war on tech companies. After he discussed the tariffs on consumer electronics with Apple CEO Tim Cook, the president told reporters "I thought he [Cook] made a very compelling argument, so I'm thinking about it."

Apple has previously asked the Trump administration to exclude iPhones from the tariffs, but with its rapid-growing wearables business, rising tariffs raise concern about costs on all Apple products.

The Dow Jones Industrial Average fell more than 600 points to close at 25,628.90, with stocks plummeting downward after the president's morning tweets. (The tariff increases were announced after the market closed.) The tech-heavy Nasdaq fell 3% on the day.

The CTA's Shapiro called escalating tariffs "the worst economic mistake since the Smoot-Hawley Tariff Act of 1930, a decision that catapulted our country into the Great Depression. Instead of making America great again, the president is using tariffs to make a great economic mistake – again. How much longer will our families, companies and economy be forced to bear the financial burden of this misguided trade policy? Clearly, tariffs aren't moving us toward a deal with China. It's time to end the trade war and come to an agreement."