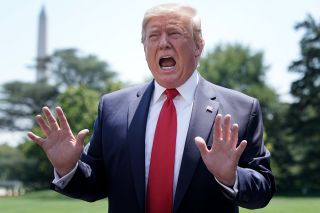 Just when it seemed the U.S.-China trade war tension had tempered, President Trump abruptly escalated stakes on Thursday by announcing a 10% tariff on the remaining $300 billion worth of Chinese imports originally excluded from the trade talks.

Last month the President agreed to not impose more tariffs on China until the two parties reached a trade deal. In a change of protocol, he said the new levies, created after China failed to purchase more American agricultural products, will go into effect on September 1 in hand with the 25% tariff already imposed on $250 billion of imports.

“We thought we had a deal with China three months ago, but sadly, China decided to renegotiate the deal prior to signing,” Trump tweeted. “More recently, China agreed to buy agricultural product from the U.S. in large quantities, but did not do so.”

This new wave of tariffs could hit US consumers harder than the earlier rounds by taxing goods like iPhones and other consumer electronics, according to CNN. An analyst even told Apple investors that the renewed trade war may "knock down iPhone sales by between 6 million and 8 million in the United States next year." In other words economic impact of the latest move could be huge.

This is bad, right?

For tech companies? Most likely, but increased tariffs add complications to the industry beyond smaller profit margins.

Apple, Sony, Nintendo, and Microsoft are among a dozen tech manufacturers that have reached out to the government in recent weeks with an array of concerns about prices rising on the products made in China. Apple suggested iPhones should be excluded from tariffs, while the latter three game console makers warned hiked import prices will cause a "ripple effect" across the tech ecosystem.

"The Trump administration is again taxing the American people in the form of new tariffs on their favorite technology products," said Gary Shapiro, president and CEO of the Consumer Technology Association (CTA). "Tariffs are taxes paid for by U.S. consumers, not China’s government."

Electronic consumers haven't been pinched by rising prices yet, and it's possible the companies behind popular products will do what they can to keep it that way.

"At a 10% rate, we may see a slight rise in the price of electronics," Avi Greengart, lead analyst for Techsponential, told Tom's Guide. "But it's more likely that the companies will shoulder it."

Game consoles are notoriously price-sensitive purchases, a rise in cost would "likely put a new video game console out of reach for many American families," according to a joint letter filed by Sony, Nintendo, and Microsoft in June. In particular, there’s concern over tariffs being placed on popular devices before the 2019 holiday season.

"Manufacturers will try their best to hold the line on price rises for now," said Greengart.

If Wednesday's announcement means anything, it's that this trade war sees no end in sight.

Most tech giants currently use Chinese factories to manufacture parts or all of their products sold in the US. According to the CTA, the U.S. Technology industry paid $1.3 billion in Section 301 tariffs imported on Chinese products in May, according to the latest available data.

With that sum expected to rise, Greengart said companies may grow more motivated to explore alternative manufacturing locales. MSI has already shifted most of its production out of China to Taiwan, which joins the likes of the Philippines and Vietnam for alternative factory sites.

"The tariff increase could reinforce efforts some factories have been making to move product out of China," said Greengart.