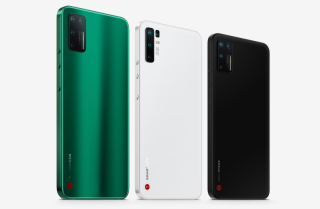 ByteDance might be the mastermind behind the ultra-viral TikTok app, but the Chinese company isn’t just in the social media business. The Smartisan Nut Pro 3 smartphone is its latest product, and by the looks of it, the new phone targets TikTok’s user base.

Questionable names aside, ByteDance’s debut phone launched less than a year after the company acquired the tech-related patents from smartphone maker Smartisan. Rumors of a joint-venture smartphone have circulated for months, without the highly publicized leaks we often see leading up to major mobile releases.

The Smartisan Nut Pro 3’s flat metal side rims are so iPhone 4 in the best possible way. The bottom speaker and USB-C charger arrangement look neat, while the sharp side buttons seem simple to navigate. It’s close in size to the iPhone 11– in fact, you might mistake it for an iPhone 12 concept design if not for the Smartisan logo printed on the back.

ByteDance’s smartphone is only available in China. In a hands-on review of the device, PanDaily said it anticipates the Smartisan Nut Pro 3 will eventually see a global release, though ongoing trade tensions between the U.S and China could leave this country out of any future rollout.

On the back of the Smartisan Nut Pro 3 are four cameras, which is one more than iPhone 11 Pro. There’s a standard 48MP camera, a 13MP ultra-wide lens, an 8MP telephoto for quality zoom, and a neat 5MP macro camera details on up-close images.

On the front there's the high-end 20MP selfie camera. What’s pretty impressive about this phone’s cameras is that you can record on the front and back cameras simultaneously. Sounds like a useful feature if you’re trying to make the latest viral video.

How powerful is the Smartisan Nut Pro 3?

Everything we know about the Smartisan Nut Pro 3 is based on its specs and hands-on reviews. In other words, we don’t know really how well the new smartphone performs. But it packs the new, top-notch Snapdragon 855 Plus chipset found in the ASUS ROG Phone 2 gaming handset. It should provide the Smartisan Nut Pro 3 with plenty of processing power for its Android-based Smartisan OS 7.0. It also packs a 4,000 mAh battery for support.

Is the Smartisan Nut Pro 3 a TikTok phone?

ByteDance has asserted that the Smartisan Nut Pro 3 is not a TikTok smartphone. Might it be designed to enhance the mobile experience of TikTok users who spend hours filming meme videos? Perhaps. But there are a few reasons ByteDance would hesitate to call it a social media phone.

You may remember the dismal tale of the HTC First, better known as the Facebook phone. The social media-centric offering from AT&T purported to pair the best parts of Facebooks with optimized hardware, but buyers weren’t interested.

TikTok users most likely use multiple social media platforms, not just the one that’s having a major moment right now. No single-purpose phone stands a chance at reaching younger audiences.

The Smartisan Nut Pro 3 doesn’t seem limited in that regard. I’d bet the TikTok app comes pre-installed, but it's in no way the defining feature of this new smartphone.