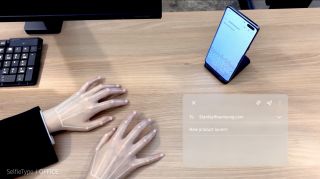 Samsung may announce a new phone keyboard at CES 2020. It isn’t physical and it isn’t on your screen.

Its name is Selfie Type and it uses the Galaxy’s selfie camera plus AI to track your hands, allowing you to type on an invisible full size keyboard on any surface. It may sound like a gimmick but this may actually work great. Take a look.

At first sight, Selfie Type reminded me of the awkward — and basically useless — laser-based projection keyboards from the Sharper Image catalog. Those thingamajigs project a keyboard on a desk and require users to hit its laser-drawn keys. The tracking was not that good, delivering lower speed and accuracy than software keyboards on phones.

Selfie Type doesn’t require any peripheral and doesn’t project anything. Instead, it uses the Galaxy’s camera to simply track your hands as you memory type. According to the information posted by a user in Samsung’s community site, “Selfie Type is a technology that utilizes the front camera and AI to analyze finger position and type without physical buttons.”

According to the source, who claims that Samsung will introduce it at CES 2020 this week, only English is currently supported. It seems pretty simple: just put your phone or tablet on a vertical position — or, if you have a Galaxy Fold, set it up in L-mode — and start typing with your fingers pretending you are hitting actual keys. Selfie Type appears to support gestures too, like pinching the air to send a message.

But, unlike Matsuda’s AR gadgets, Selfie Type doesn’t provide any visual feedback whatsoever. That’s not necessarily bad — typing is a mechanical memory action for many people who type on physical keyboards. I don’t look at my keyboard while typing at all.

Yes, my hands have the position of the keys memorized and I rely on the spacebar to position them correctly in order to type quickly. But that’s where AI is supposed to kick in, just like with Gboard’s finger sliding, where reaching the right letters with total accuracy is not critical for you to produce the word you want.

Obviously, that means that Selfie Type won’t be for everyone, but it also means that it won’t slow down its target users because it won’t require memory typists to hit precise targets, making it all a completely instinct-based process. If the AI is really clever enough to correct any mistakes on the fly, I don’t see why it wouldn’t be able to do just that. All my reservations about weird keyboard concepts autocorrecting me on the fly disappeared with finger slide typing. I use that daily and it does a really good job even while it doesn’t match my physical keyboard typing speed.

If Selfie Type really works like the demo video shows, I can really see myself using this regularly. And I can see Google finally putting Project Soli to good use too, as that won’t even require you to put your phone on a stand — the only real drawback I see to Selfie Type unless you have a foldable phone or a tablet with built-in stand.

Samsung's CES 2020 press conference kicks off today (Jan 6) at 6:30 p.m PT / 9:30 p.m ET, and could mark the official debut of Selfie Type in addition to a variety of new 5G and smart home products. Be sure to bookmark our CES 2020 news hub for all of the latest out of Las Vegas.