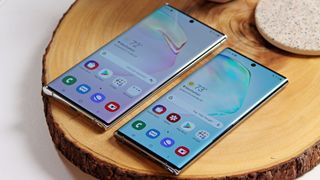 All modern smartphones are powered by lithium-ion batteries, and while these work well enough, there’s room for improvement. Both charging speed and total capacity are areas where improvement is highly desired, but Li-Ion batteries can only manage so much. This is why manufacturers like Samsung are looking towards other materials to use in its batteries.

Leaker Evan Blass said in a recent tweet that Samsung is working on making graphene batteries for a smartphone due to come out in 2020 or 2021, which would be capable of charging fully in under half an hour.

If Samsung were able to make graphene batteries a reality in 2020, they could be a candidate for the upcoming Galaxy S11.

Graphene batteries are not only theorized to be faster charging than Li-Ion batteries, but are also able to hold more power, and will deteriorate at a slower rate, meaning you get the maximum capacity for a longer time than you would with a rapidly wearing battery like those available today.

Samsung has been working on its graphene power cell technology for some time. A previous leak took place in October 2018, which claimed Samsung would be bringing the technology to its 2019 phones. Now that the Galaxy Note 10’s launch event is done we can say with certainty that didn’t happen.

In November 2017, Samsung itself announced a new graphene enhanced battery technology which would cover the cell’s cathode with balls of graphene to reduce wear and increase charging speed by up to five times.

The debacle surrounding the Galaxy Note 7’s overheating (and occasional exploding) problems from a few years ago is still all too fresh in people’s memories, so it’s little surprise Samsung’s putting a lot of effort into finding the next step in battery technology.

Samsung’s Galaxy S10 Plus os one of the longest lasting handsets, landing on our list of phones with the best battery life. And the Galaxy Note 10 Plus lools promising, too, thanks to its 4,300 mAh battery. But Samsung could leapfrog the competition with a graphene battery phone, whether it shows up in the Galaxy S11 or we have to wait for the Galaxy S12.