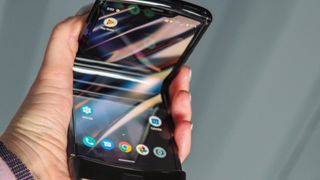 From flagships like the iPhone 11 Pro and Pixel 4 to bargains like the OnePlus 7T and Pixel 3a, last year certainly saw its share of very compelling smartphones. And the new year shouldn't disappoint either.

Now that Samsung is selling the Galaxy Fold to consumers, all eyes have turned to Motorola and its Razr to carry the foldable mantle. The new Razr was originally intended to launch January 6, with pre-orders going live on December 26. But now Motorola has delayed the launch, citing high demand. There is no new firm launch date.

Additionally, details are already emerging about the next flagships from both Samsung and Apple. The Galaxy S11 has been rumored to bring a significant camera upgrade, perhaps even including the phone maker's new 108-megapixel image sensor — and we're just a month away from finding out what Samsung has planned. Meanwhile, the iPhone 12 could very well be the first Apple handset with 5G onboard. It's also quite possible Apple will drop new, lower-cost iPhone SE 2 models in the spring.

Hard though it may be to believe, we'll have a new Galaxy S phone in our hands in about a month. Samsung announced its next Unpacked event will be Feb. 11 in San Francisco, and it's all but certain that the Galaxy S11 will make its debut there, just as the Galaxy S10 appeared at a February 2019 event.

What should you expect from the Galaxy S11 (assuming Samsung sticks with that name and doesn't call its new phone the Galaxy S20 Ultra)? It seems likely that Samsung will focus on the cameras for this version of its flagship. (What a shocker, right?) More specifically, Samsung's rumored to be working on a 108-MP camera as the main shooter for the Galaxy S11, possibly set within one of the largest imaging stacks we've seen in quite some time. You can also expect a powerful 5x optical zoom. The new phone could even add a spectrometer, which would let you point the camera at food to determine its nutritional content, among other features.

The Galaxy S11 may not be the only phone Samsung shows off on Feb. 11. All signs point to a a sequel to last year's Galaxy Fold, with hopefully a smoother launch for the foldable device this time around.

You have to give Samsung credit for persistence. The company faced setbacks with the release of its first foldable phone, the Galaxy Fold, and it's apparently already the Galaxy Fold 2 with a clamshell form factor.

According to multiple reports, Samsung is preparing a smaller version of the Fold with a 6.7-inch display that closes into a square, to take on Motorola's Razr reboot. The device would carry two cameras on the outside along with another inside, and Samsung is reportedly experimenting with a new type of protective glass that is only 3% of the thickness of Gorilla Glass to be able to achieve the handset's durability and flexibility objectives. A recent rumor suggests the new Fold may even be priced super aggressively, under the $1,000 mark, to get it into the hands of more users.

Huawei threw its hat in the foldable phone race with the Mate X, announced almost a year ago at Mobile World Congress 2019. The Mate X features a single display measuring 8 inches from corner-to-corner, that dominates the surface of the device. It also has one quad-lens camera module, rather than the array of rear- and front-facing lenses in Samsung's handset. Oh, and it's 5G ready, too.

However, at €2200, the Mate X's price puts the Galaxy Fold's to shame. Additionally, it's still unclear when the handset will make it out of China. Google was temporarily barred from licensing its apps and services to Huawei for new devices, though the Mate X was developed before the ban went into effect — so theoretically, it should've be spared. The foldable did arrive in its domestic market in November, but Huawei has been tight-lipped on its availability in other parts of the world, which makes us skeptical it will ever see the light of day in the West.

After nearly a year of rumors, the Motorola Razr debuted on November 13 as a Verizon exclusive smartphone with a foldable, 6.2-inch plastic OLED display. The device will cost $1,500, which is still expensive compared to the $999 iPhone 11 Pro or $1,099 Galaxy Note 10 Plus, but a good sight cheaper than the $1,980 Galaxy Fold.

The Razr actually incorporates two displays: that humongous one on the inside, which folds in half, as well as a second exterior panel used for notifications, message previews and quick selfies. There's a fingerprint sensor embedded in the chin at the bottom of the device, as well as two camera lenses — one 16-MP shooter on the outside, and another 5-MP shooter notched within the main screen.

One way Motorola was able to keep the Razr's costs down relative to other foldables was by using a lower-spec Qualcomm CPU, in this case the Snapdragon 710. That likely means the new Razr won't be able to put OnePlus' and Samsung's wares to shame in the performance department, though that 710 silicon should deliver enough grunt for everyday tasks, as well as superior efficiency on a charge.

The Razr was to already be available for pre-order, but Motorola has temporarily delayed its rollout plans, as it deals with higher-than-anticipated interest in the foldable phone.

The Pixel 3a was a massive success for Google's mobile division, doubling the number of smartphones the company shipped last year (even though it only spent half of 2019 on the market). Therefore, it should come as little surprise that Mountain View is reportedly planning a successor.

Rather, the bigger surprise is the way the Pixel 4a might look. The render you see above, provided by 91Mobiles and based on information attained by Steve Hemmerstoffer (better known as @OnLeaks) paints a Pixel 4a with a decidedly more cutting-edge look than Google's current flagships. There's a consistently slim bezel encircling the display, as well as a Samsung-esque hole-punch cutout for the front-facing lens.

Wired headphone stalwarts will be pleased to find a 3.5-millimeter headphone jack in this mockup, and eagle-eyed readers will note the capacative, rear-facing Pixel Imprint sensor around back. (The Pixel 4a assuredly won't be capable of sophisticated — and expensive — facial identification.) Interestingly, the Pixel 4a's rear camera stack has retained its square housing from the Pixel 4 line, even though it carries only one lens.

While this render by no means represents the definitive Pixel 4a design, Hemmerstoffer and 91Mobiles do have a solid track record with these kinds of leaks — and this one's certainly piqued our interest. If history serves correct, we won't know for certain what Google is planning until about halfway through 2020.

You may not have to wait until next fall for a new iPhone. Rumors about the iPhone SE 2 are beginning to pick up again, as people pine for a successor to Apple's compact, inexpensive iPhone.

Rumors have overwhelmingly suggested the iPhone SE 2 won't be as small as its predecessor, with a 4.7-inch screen that's reminiscent of the iPhone 8. But the new phone would be plenty powerful, reportedly running on the same A13 Bionic chip found inside the iPhone 11 family. We could find out soon enough if the iPhone SE 2 is a reality — respected Apple analyst Ming-Chi Kuo thinks the phone will ship in the first three months of 2020. And in a surprising new twist, some sources are even claiming that the revived SE line will include a larger-sized option as well, possible evoking the 5.5-inch iPhone 8 Plus.

Yes, the iPhone 11, 11 Pro, and Pro Max came out only three months ago, and yes, there are already rumors beginning to break about the iPhone 12 due out next year. In fact, reports surrounding Apple's next-generation handsets started to make headlines before Cupertino's latest reveal. Such is the news cycle around devices planned years in advance.

So what should you look forward to around this time 12 months from now? For one, an all-new design that finally sheds the iPhone X shape that has defined Apple's handsets for past three years. According to leakster Ben Geskin, one of the models will even ditch the notch entirely, embedding Apple's TrueDepth camera system right into the narrow top bezel. Furthermore, there's a good chance that the range-topping 2020 iPhone will support 5G. After all, there's growing evidence to suggest many iPhone owners that held off upgrading to the 11 series did so because of a lack of support for next-generation wireless networks.

While Apple's next iPhones are a year away at this point, we should only have to wait until the spring before we begin to have a pretty clear idea of what the company is planning, if history is any indication.

No, you didn't fall haplessly into a time machine that's sent you five years into the past — Microsoft is actually making a Surface phone. And not just any phone; one that has two screens and runs Android. The Surface Duo, revealed a year before its tentative holiday 2020 launch, features a pair of Gorilla Glass-covered 5.6-inch displays joined by a hinge down the middle. It's not truly a foldable, in that the screens themselves don't bend. Rather, they can rotate 360 degrees, so you can use the device in several different orientations.

Like other Android flagships, the Surface Duo is powered by Qualcomm's Snapdragon 855 processor, according to Wired — though Microsoft was quick to point out that it doesn't see the device strictly as a phone. Still, the 855 will be outdated by the time the device eventually launches, which also raises the question of whether or not the Surface Duo will support 5G. Microsoft made no mention of it during the unveiling, but if other late 2020 flagships support next-gen networks, the company's first phone in years will look mighty outdated if it doesn't as well. (And that's to say nothing of the phone's ginormous bezels.)

Still, there's lots of time for Microsoft to refine and improve the Surface Duo's design before it hits the market alongside the larger Surface Neo tablet. What we're seeing now is clearly an early look — though it's still certainly piqued our interest.