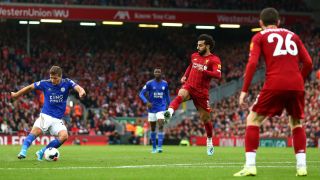 I've got a feeling that you're one of the many looking to live stream Leicester vs Liverpool today. One of the big matchups of this Boxing Day (Dec. 26 in the U.K.), this outing sees the Leicester squad looking to upset Liverpool, one of the three teams to hand them a loss this season.

Of course, that won't be an easy task. While Liverpool's got four confirmed out with injuries (Clyne, Matip, Fabinho and Lovren) and two that are still unconfirmed (Brewster and Oxlade-Chamberlain both also with injuries) it's still got the momentum going into the matchup. Liverpool just won on Saturday, in extra time against Flamengo in Qatar, in the FIFA Club World Cup (1-0), while Leicester fell 3-1 against Man City.

Oh, and Leicester's tracking the health of midfielder Harvey Barnes, after an ankle issue arose in the game against Man City (that broke Leicester's hot streak).

Last time they met, Liverpool took the win, 2-1. Looking at the clubs' history, Liverpool's got a ratio of 2 wins to 1 loss, having taken 14 wins while Leicester took 7 (they drew 6).

Liverpool goes into this matchup with two consecutive Premier League wins at Leicester, but the team's never stacked up three victories against Leicester in a row. Can Liverpool set a new record or will Leicester sneak a win away? We'll know once we start live streaming Leicester vs Liverpool, which U.K. audiences can do on Amazon Prime Instant Video.

The big game happening at King Power Stadium starts 8.00pm GMT local time today (Dec. 26), which is 3:00pm Eastern and Noon Pacific in the US — so everyone can watch it on both sides of the Atlantic. Those in Australia needed to set an alarm for the 7:00am AEDT start time.

How can I use a VPN to watch Premier League matchups no matter where I go?

We've got about 5 months until May 2020 when Premier League season play concludes, and I don't know many who will always be home for each important fixture. Fortunately, you can stay on top of Premier League action when they're outside the U.S. can always turn to a virtual private network, or VPN. With a VPN in place, you can appear to be surfing the web from your home country, letting you access the same streaming services, even if you're in another region.

Not sure which VPN is right for you? We've tested many different services and our pick for the best VPN overall is ExpressVPN. It offers superb speeds and excellent customer service. But you've got other VPN options as well. Here are our top picks.

ExpressVPN: We think the speed, security and simplicity make ExpressVPN second to none. During our tests, we saw fast connection times, and we're impressed by the service's ability to access more than 3,000 services spread out across 160 locations in 94 countries.

How to live stream Leicester vs Liverpool in the U.K.

A good trend (for Prime members) continues this Boxing Day, as a 10 Premier League matches stream on Amazon Prime Instant Video. To enjoy this day-plus of matches, you'll need to make sure your Prime subscription (£79 a year or £7.99 a month) is still active.

Or maybe today is finally the day to take advantage of Amazon's 30-day free trial. Don't know how you waited, but this is a good opportunity to try it out.

Prime Instant Video is for more than just super-quick delivery and original programming. This year, Amazon began streaming Premier League patches, and it's got a whole 10 fixtures to offer for Boxing Day. 9 actually happen on Dec. 26, while Wolves vs Man City is at 14.45 local time tomorrow. View Deal

How to live stream Leicester vs Liverpool in the U.S.

In the U.S., NBC holds the rights to the Premier League, with most of the matches airing on cable via the NBC Sports Network (NBCSN) and the Spanish-language Universo. NBCSN is on Fubo, Sling, AT&T TV Now, Hulu + Live TV, YouTube TV, all which have free trial windows you could leverage for the Boxing Day games.

Our top picks for this matchup are Fubo (a major option for sports fans), Hulu + Live TV (for those who want originals) and Sling (the budget pick):

Fubo.TV: The sports-centric Fubo.TV service includes NBCSN in its $55 monthly package, and a cloud DVR feature lets you record matches to watch whenever you want.View Deal

Sling TV: While Sling may be $5 pricier per month than it was yesterday, its $30 per month Blue package is still the cheapest live TV package that that includes NBCSN.View Deal

Want some premium original programming with your live TV? Hulu + Live TV might not be the mega sports hub that Fubo is, but it's got The Handmaid's Tale, the Veronica Mars reboot, Shrill and the upcoming High Fidelity reboot.View Deal

How to live stream Leicester vs Liverpool in Canada

Oh Canada, you'll need to get DAZN. Da Zone, as it's also known, is the only destination for live Premier League matches this season.

Yes, all 380 matches of the season are only on DAZN, which I've jokingly referred to as Day's Inn. If you're as unfamiliar with it as I was, you can opt to get the one-month free trial. Going forward, the service is either $20 per month or $150 per year.

How to live stream Leicester vs Liverpool in Australia

If you're waking up to live stream Leicester vs Liverpool at 7:00am in Australia, you're gonna need Optus Sports. Just like DAZN in Canada, Optus has all 380 of the Premier League matchups this season.

To get Optus without the membership, monthly subscriptions to Optus Sport are available at AUS$15 per month.