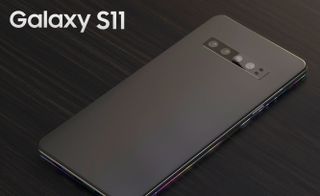 Samsung is moving full speed ahead with the Galaxy S11 and the leaks are unstoppable. Today we learned that it may come with a 5000mAh battery and a new “SpaceZoom” that combines optics and AI for dramatic, crystal clear zooming abilities.

Together with other previously rumored features, the Samsung Galaxy S11 is poised to become a real iPhone 12 killer — at who knows what crazy price tag.

Not that Apple will not push the envelope on their own: If the rumors are true, the iPhone 12 will be a completely redesigned device inspired by the iPhone 4 that may also come with a 120Hz display. But it’s hard to believe that Apple would take the drastic steps that Samsung may be taking with the Galaxy S11 — especially when it comes to the camera package and the battery size.

Here are the five features that may set the Galaxy S11 as the flagship to beat in 2020:

This is in line with the latest rumor about the camera abilities in the S11: Apparently, Samsung‘s codename for the new camera is “Hubble” because of its amazing zooming powers.

Other brands —like the 50X hybrid zoom in the Xiaomi Mi CC9 Pro pictured in the video below — are already deploying this type of zooming mechanisms that result in crystal clear images instead of blurry zoomed in pics.

According to reliable Samsung leaker Ice Universe, the camera pack will also include Samsung’s new 108MP Isocell Bright HMX — a very large Quad Bayer sensor that can group pixels in groups of four for better low-light performacen. That sensor, according to Samsung, is designed to crush Sony’s mobile sensors. It is also the sensor used in the Xiaomi Mi CC9 Pro, which has already made it to the very top of the DxOmark camera ranking.

There are no rumors about insane zoom abilities in the new iPhone 12, which already had a major camera upgrade in 2019. Apple also tends to use Sony sensors rather than Samsung’s Isocell line. It’s unlikely that the California company will be using this technology.

For notch, teardrop, and punch hole haters like me, this is perhaps the best rumor about the Galaxy S11: the selfie camera may be totally hidden behind the display. At least according to Korean publication The Elec, which claims that Samsung will use a technology called Hole-in-Active-Area (HIAA) to enable an under-display camera sensor to look through a transparent AMOLED screen. The paper claims that mass production will start in 2020.

Unfortunately, this is perhaps the weakest rumor, since Ice Universe believes that the under-display camera will not debut in the Galaxy S11 but the next Galaxy Fold device. There are also rumors that Samsung will be implementing a facial ID technology similar to Apple and Google. This technology uses infrared sensors to capture 3D information and make this biometric method to work under dark lighting conditions.

Do you want a sneak peek at the future? Here you go...introducing you to Under-Display Camera technology!#Xiaomi #InnovationForEveryone pic.twitter.com/d2HL6FHkh1June 3, 2019

On the other hand, both Xiaomi and Oppo have demonstrated how a selfie camera hidden under a display works. Following the Galaxy S10’s disappointing sales numbers, Samsung knows it needs to knock the S11 ball out of the park so a totally clean display will be a major feature to make this possible.

Samsung is reportedly planning to use a 120Hz display in the Galaxy S11. This information that has been confirmed by Ice Universe. The Asian rumorologist thinks an S11 with OneUI 2.0 animation effects on the 120Hz display “will be the best combination.”

We know that the rumored Exynos chip in the Galaxy S11 supports upt to 6 cameras and 120Hz displays.

According to Ice Universe, Apple may also be exploring the use of a 120Hz AMOLED panel made by Samsung or LG for the 2020 iPhone 12, so this may be a tie between the Cupertino flagship and the Galaxy S11.

The only drawback of these advanced displays is the battery consumption. Since the graphics processor needs to produce 120 frames per second and the screen has to refresh at the same speed, the power needs are considerably higher.

So, with this power-hungry screen, it’s only natural that Samsung is planning to pack a much bigger battery in the 2020 Galaxy flagship. According to Ice Universe, “we can guess that the S11+ battery will reach nearly 5000mAh, which [he thinks] is prepared for high refresh rate screens and 5G.”

If Samsung finally confirms these features, they may have a formidable flagship on their hands. It’s yet to be seen that if having these specs will help the Korean company to boost sales in a depressed market, especially when other brands are offering formidable phones for a fraction of the price of the Galaxy S and iPhone series.