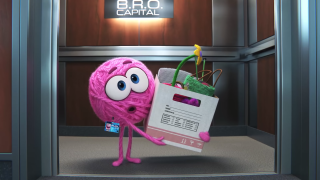 Pixar movies are such big events that the mini-movies that appear in front are also memorable cinematic moments. So we're not surprised that the Disney Plus streaming service will highlight more of these excellent short films in a new project called Pixar SparkShorts. Here's the whole kit and kaboodle of Disney Plus' Pixar shows and movies.

There's more, though, including a previously announced Toy Story spinoff and a show that brings Pixar favorites to real life. Plus, we've got a list of every Pixar film on Disney Plus.

Pixar teased the collection today in the above trailer, announcing that 4 of this set of 6 shorts will launch on Nov. 12, day 1 of the service. The clip shows a few neat moments, including a super-powered baby rising into the air in Float, a cute sentient yarn person in Purl and a pair of dueling robots in Smash and Grab and Purl.

Wind (Dec. 13, 2019) and Loop (Jan. 10, 2020) round out the pack. YouTube commenter Matthew Steiner notes that he's already seen Purl, Smash and Grab and Kitbull, and a quick Googling shows that those shorts were already screened at festivals.

The trailer hypes SparkShorts as "from the studio that brought you Bao," reminding us about the hyper-adorable, super-emotional Oscar winner (best animated short film).

Pixar's also debuting a Disney Plus series about what happens when we mere humans run afoot of its characters in real life. The series, which features physical manifestations of the desk from Inside Out, the cleanup crew from Monsters, Inc. and WALL•E itself, also bows on Nov. 12.

I know some people skipped Toy Story 4, but those poor souls didn't get to meet Forky, the sentient spork who sees out of googly-eyes and grabs things with his pipe-cleaner arms.

This new series of shorts will find Andy's other toys explaining big topics — including cheese, friends, art and time — to the simple-minded utensil.

Every Pixar movie coming to Disney Plus

Of course, you'll also get the Disney Pixar library, as previewed in another trailer Disney released on Oct. 30. A full list of titles available on Nov. 1 is below.