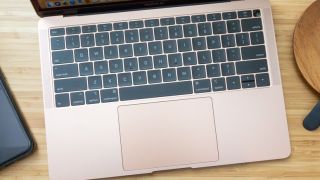 Apple analyst Ming-Chi Kuo already predicted that the oft-rumored 16-inch MacBook Pro would revert to a scissor-style keyboard switch. He now believes that future MacBooks released in 2020 will also have a more traditional keyboard.

First reported by MacRumors, Kuo predicted that Apple will refresh its lineup of MacBooks with the new keyboards in the second quarter of 2020.

Apple's October event is reportedly coming soon, at which Apple is expected to introduce the 16-inch MacBook Pro, which is rumored to have thin display bezels, a 3072 x 1920 resolution display and 9th Gen Intel H-series processors. If Kuo is correct (as he usually is), the scissor-style keyboard on the 16-inch MacBook Pro will set the tone for what's to come in 2020.

We've been eagerly awaiting the death of the butterfly-style keyboard. Apple introduced the custom switches as a way to decrease the footprint of its laptop, but that quickly backfired when users complained of reliability problems. Those complaints became so prevalent that Apple apologized (after several class-action lawsuits were launched against it) and eventually agreed to service affected keys and keyboards free of charge.

With a traditional scissor-style keyboard, upcoming MacBooks should strip themselves of the biggest pain point we've had with Apple's laptops over the last few years. We'll be crossing our fingers that Kuo is correct so that we can soon say an unceremonious farewell to the troubled butterfly keyboard.