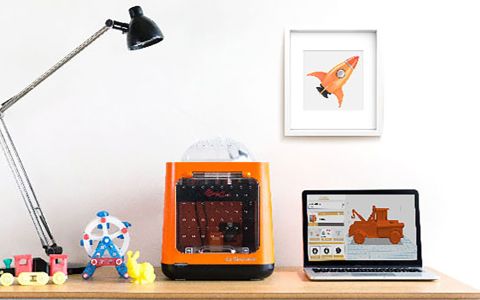 XYZprinting's latest entry-level 3D printer packs in a lot of features for its low price.

XYZprinting produces a wide range of 3D printers, but the company seems especially adept at making printers aimed at novices and newcomers. The da Vinci Nano, XYZ's  entry-level printer released in 2018, is a prime example of that. Priced at $179.99, this simple printer offers a lot of features for a small price, and it remains among the best 3D printers.

Design: As big as a bread maker

The da Vinci Nano, which measures 14.9 x 14 x 11 inches, looks more like a kitchen appliance than something high-tech; it's like a cross between a bread maker and a 1970s sci-fi movie prop. Though a front door blocks off the moving and hot parts of the printer, there is no override. If you open the front door, the printer keeps going, so it isn't suitable for unsupervised use by younger printers.

The door does help block off much of the noise of printing, though — a low whirring and buzzing sound that is quieter than that from most printers.

Behind the lift-up front door is the print area, with a glass print bed that allows for prints of up to 4.7 inches on each side. That's not as big as the prints possible from printers like the Dremel Digilab 3D40, but it's big enough for most uses. (And considering the size of the Nano, it's a pretty generous print area.) This print bed is a piece of glass that can be easily removed by releasing a couple of latches, which makes it easier to remove prints.

Print Materials: Only PLA from XYZ

The Nano uses filament stored on a reel that fits onto the printer's back. As with most XYZ printers, the PLA filament features a chip that identifies it to the printer, with the Nano working only with filament supplied by XYZ. Each of these reels, which holds 600 grams of filament, costs about $27.99.The filament comes in 14 colors, ranging from clear to black. That's a bit more expensive than the printing materials for many other printers, some of which can use third-party resin that costs about $20 for a 1-kilogram (2.2 pounds) reel.

Because the Nano lacks a heated print bed, you're limited to PLA; the Nano won't work with ABS or other filament materials.

The da Vinci Nano is simple and straightforward to use. You just unbox the printer, remove the numerous bits of tape and foam holding it in place, snap the print head into place and feed in the filament. It took us less than half an hour to go from opening the box to starting the first print.

The controls on the da Vinci Nano are limited to a single glowing button on the front and a power switch on the back. The glowing button shows the status (green for ready, orange for print in progress and red for error), but everything else is controlled through the XYZmaker software, which is free for Windows, Mac and Linux. (However, you do have to register with XYZprinting to access the download page.)

The XYZmaker software is quite simple to use, offering the ability to import, scale, move and combine 3D models. It can also create 3D models such as text, logos and primitives such as spheres, cubes and pyramids. These can be combined with (or removed from) existing models, so you can do things like create a 3D model of text and then use it to cut out the shape of that text in another 3D model, like a machine that engraves your pet's name onto a tag. XYZmaker is not a full-featured 3D-modeling program, but it is nice to see that more features for these kinds of simple tasks are becoming available in 3D-printing programs.

Once the print is ready to go, you pass it over to the XYZ Printer plugin, which slices up the model and prepares it for printing. Again, this is a simple-to-use program that offers all of the basic features you will need, plus a few more. You get a 3D preview of the model, and it can add supports (the pieces of material that hold a complex print in place) and tweak other settings, such as infill (the amount of material that is printed inside the model to hold it together). You can use the four print-quality settings — Draft, Normal, Fine and Hollow, a special mode that removes any infill — or tweak the settings yourself to get the perfect print.

Once you hit Print, the XYZmaker program sends the file to the da Vinci Nano over the printer's USB connection. Once that's done, you can disconnect your computer from the Nano without affecting the print, but the software provides the only way to monitor the progress. There is no visual or other indication on the printer itself of how long your print will take.

We found the da Vinci Nano to be a fairly quiet printer while running; it exhibited only a slight whine from the motors and fans, accompanied by a whirr and buzz from the print head moving. It's a little irritating if you are sitting right next to the printer, but the noise was barely audible a room away.

The da Vinci Nano is not a fast printer. Although it can print sizable objects, it takes a long time to do so, especially on the higher-quality settings. Our test print of Auguste Rodin's The Thinker, which is about 4.3 inches high, took between 7 hours and 36 minutes on the Draft setting and a lengthy 21 hours and 3 minutes on the High Quality setting.

That's a lot slower than other, more expensive printers, such as the Dremel Digilab 3D40, which took between 3 hours and 15 minutes and 14 hours and 2 minutes, respectively, for the same print. Even some similar low-priced printers were faster; the $160 Monoprice MP Mini Delta, for instance, took less than 5 hours to print in its highest-quality speed mode.

MORE: 3D Printing: What to Do After You Buy Your Printer

This is probably the most obvious place where XYZprinting has cut corners to keep the cost down: In the High Quality print mode, the print head moves more slowly so that it can be controlled more accurately. More expensive printers, by contrast, use bigger motors that can be accurate at higher speeds, thus maintaining both speed and print quality. The cheaper motors in the da Vinci Nano make you choose one or the other.

We were impressed with the quality of the prints that the da Vinci Nano produced; they had a clean, smooth finish and well-made edges in the Draft and Normal modes.

The print of our Thinker model in the Draft mode (which uses a 0.4-mm print height) had very visible print layers, but it still featured an attractive, clean finish on the back and arms of the figure and little or no disjointed layers. Prints produced in Normal mode, pictured above, (0.4-mm layer height again, but printed a bit more slowly) looked smoother but still had a lot of visible layering and some deformed layers that didn't quite seem to have stuck together properly, especially on smaller details such as the fingers and toes of The Thinker model.

The High Quality print mode (above) still had some obvious layering. But the smaller layer height made them less intrusive and produced a smoother overall look, and the details were reproduced more accurately.

For $179.95, you get a lot of printer with the da Vinci Nano. Although it is restricted to printing with PLA from XYZprinting, the Nano does a great job of producing attractive prints, and the company's PLA filament is not overly expensive (although it costs more than third-party options).

The software that controls the da Vinci Nano is simple to use and offers some neat, unusual features, like basic modeling tools to add text to existing models. The printer is slow, though, so expect to wait a while for your prints. Overall, however, XYZprinting's da Vinci Nano is a great package for anyone who's curious about 3D printing — whether at home or in a classroom — and doesn't want to spend a lot to get started.