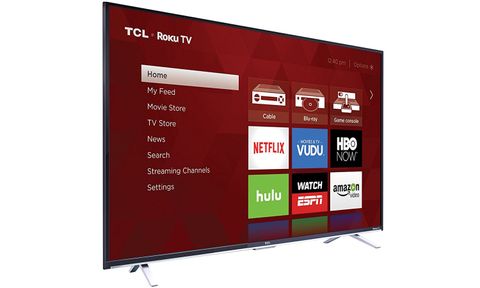 Despite some shortcomings, the TCL Roku TV 55US5800 offers an intuitive, smart-TV interface in a bargain-priced, 55-inch 4K display.

Simplicity and savings are the hallmarks of the TCL Roku TV 55US5800 4K Ultra HD TV. The 55-inch set has Roku TV's expertly designed smart-TV interface, with thousands of online channels, and is available for $500. It's not quite our top value pick, but the TCL's features and price should make it an instant favorite among bargain hunters.

The TCL Roku TV is aggressively conventional in design. It's not particularly thin (about 3.5 inches deep at its thickest point), and it has a black bezel about the same thickness as such sets as the Sharp Aquos LC-55N7000U and the Vizio P-Series.

The TCL Roku TV has two splayed feet on each side to support it on a table top; it's a design similar to that of Vizio and other popular models. For connecting the TV to other components, the TCL includes four HDMI ports (all supporting 4K copy protection) and built-in Wi-Fi for making that all-important internet connection to support Roku's channels.

The TCL LCD set uses LED full-array backlighting but not local dimming. Consequently, it can't independently adjust the brightness of different parts of the screen as adroitly as other sets. Furthermore, the TCL Roku TV does not support the latest high-dynamic range (HDR) or Dolby Vision picture formats. So it lacks the ability to display subtle contrasts, and the set's skewed color balance can make the picture look cooler and lacking in warmer deep red tones.

In our tests, the TCL Roku TV revealed some weaknesses, particularly in color accuracy. In our charts, it was very skewed toward the cooler blue end of the spectrum, making for less than accurate color reproduction.

The 55-inch TCL Roku TV delivered over 98 percent of the standard (rec. 709) color space, but its color accuracy waned with a Delta E score of 10.49 (numbers closer to 0 are better). By comparison, a 50-inch Insignia Roku TV had a much better Delta E score of 1.12. Extended viewing confirmed our results.

With 4K ultra-HD video sources, there was no banding or posterization artifacts, which can mar a picture with blotchy colors. However, even in the set's best preset mode (Movie), there was a noticeable lack of contrast and colors were not as rich as I would have liked.

In The Martian, the TCL Roku TV's picture could make faces look plastic and artificial. (A complaint I also had with Vizio's much more expensive P-Series set.) The Red Planet also tended to look more gray, compared with the orange hues of the dust clouds emphasized by top-notch sets such as LG's OLED TVs. Even a white turtleneck looked more blue on the TCL TV.

A 4K music video of an Emi Meyer performance showed that the TCL picture loses out in rendering deep reds, such as those in her dress, which lacked saturation and depth. Viewing The Amazing Spider-Man 2, however, didn't elicit any obvious flaws.

Similarly, the TCL Roku TV did a good job upscaling HD content to 4K. While the TV is rated as a 120 Hz set in some literature, it's a 60 Hz display, which means that some fast motion can look a little blurred. However, I didn't find any such shortcomings distracting. In fact, while there's some softness to the picture, eliminating some details such as the distant stars in the movie Gravity, there aren't any excessive artifacts (usually associated with excessive video processing) in chase scenes like those in Skyfall.

TCL's 55-inch Roku TV has several preset audio settings, including Normal, Speech, Theater and Big Bass. The Theater option delivers the most expansive, open sound, but the audio is still very compressed and focused toward the center of the image.

The speech mode is moderately effective at emphasizing dialogue but could be better (especially for late-night viewing when you're trying to keep the volume down but still want to follow the plot). Switching to big bass doesn't so much boost the lower notes as it does suppress the higher ones, giving you the false impression you're getting more from the low end. While serviceable, the built-in sound system of the TCL Roku TV is generally tinny and scratchy compared with a good $200 sound bar.

Interface: Roku for Everyone

The best feature of the TCL TV is its Roku interface. It brings together thousands of online video and music sources — from HBO and Netflix to Pandora and iHeartRadio — in a simple design that's easy to follow. It's quick, efficient and allows you to add new apps (or "channels" in Roku parlance) easily.

For example, I was able to download and install a new YouTube app faster than I could perform a similar update on LG's webOS system. Additional benefits include a 4K Roku channel that makes it easier to find high-resolution content, and the My Movie Watchlist, where you can add movies you'd like to see and have it automatically notify you when the programs become available.

Navigating through all of these features is facilitated by the simple Roku remote control with power, back and home buttons situated above a four-way directional pad. There are also dedicated buttons for Netflix, Amazon, Vudu and Rdio. Rdio is now defunct, purchased by Pandora, so pushing that button takes you to a screen that acknowledges Rdio is closed. The other downside here: there's no headphone jack, something I have particularly appreciated on other Roku remotes for late-night listening.

Making fine-grained picture adjustments to the TCL set isn't something most owners are likely to do, but TCL now allows you do so, albeit via a free smartphone app. You can tweak color gamma presets, noise reduction and white balance.

While it is far from the best 4K ultra-HD display we've tested, the 55-inch TCL Roku TV gets a positive rating thanks to its Roku smart-TV interface and exceptionally low price. Shoppers should note, however, that the Insignia Roku TV we've tested offers a better, albeit smaller, 50-inch picture — as well as the same excellent Roku interface — for the same price.