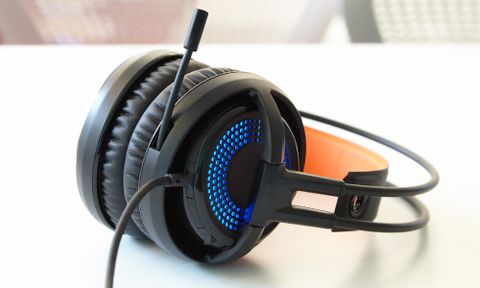 Although the SteelSeries Siberia 350 doesn't work as an everyday pair of headphones, it could benefit PC gamers who have compact setups.

There's something to be said for doing one thing and doing it well, which is what the SteelSeries Siberia 350 ($120) aims to pull off. This headset is for PC gaming first and foremost; there are no extra cords for consoles, mobile phones or handheld devices. You will not make phone calls with this headset, and coordinating multiplayer matches in Uncharted 4 will require some inconvenient extra hardware. What you will be doing is wearing an extremely comfortable, no-nonsense headset with good sound quality and a respectable number of customization options.

Although the Siberia 350 doesn't offer enough all-around functionality to make it an everyday pair of headphones, it could be a real boon for people with compact, high-efficiency gaming setups.

The Siberia 350 channels the design philosophy of the SteelSeries Siberia v3: extremely simple and fantastically comfortable. Like the v3, the 350 has breathable, faux-leather ear cups; two simple, arcing rods that keep the device's headphone shape; and a flexible headband. There's nothing to adjust, because the headband automatically conforms to your head's shape. As such, the Siberia 350 is perhaps the most comfortable headset on the market, and definitely the easiest to put on.

Unlike the v3 but similar to the SteelSeries Prism headsets, the Siberia 350 has ear cups with colored lighting. While I've never really seen the point of colored lighting on a headset (it's not as though you can see it), it's an aesthetically pleasing touch. Otherwise, the device has only a single USB cable that attaches directly to a computer, a volume control wheel near the top of that cable and a button to mute the mic behind the left ear cup.

The Siberia 350's design is minimalist, which is refreshing in a world of overdesigned peripherals. My only issue with it is that the USB cable is fairly short (5 feet), almost as though SteelSeries knew you already have a keyboard with a USB pass-through. If not, you'll have to either hope the cable is long enough to plug into the front of your PC or spring for an extension cord.

You can also choose between black and white color schemes, so that's a plus.

As I already noted, the Siberia 350 is one of the most comfortable headsets I've ever used, thanks to its adjustable headband. At around 8.5 ounces, the Siberia 350 sits lightly on the head, and the foam ear cups are both pliable and unrestrictive. Even with my glasses on, I wore the Siberia 350 for hours at a time without issue. The only snag I could foresee involves the short cord, which precludes excessive movement — bad news for those who tend to move their heads along with their games.

I handed the headset off to a co-worker, who agreed with my assessment about the headband and the ear cups. However, he pointed out that the "weight distribution" was not ideal because it pressed down more on the top of his head than around his ears.

I ran the Siberia 350 through a variety of games to get a good idea of how it handled each genre: Star Wars Battlefront for first-person shooter, Heroes of the Storm for multiplayer online battle arena, Rise of the Tomb Raider for action/adventure and Marvel Heroes for massively multiplayer online games. The headset sounds great across the board, but the 7.1 surround sound is not ideal for every situation.

SteelSeries calls the Siberia 350's DTS 7.1 surround sound the "truest virtual 3D environment with the most accurate placement of audio cues." In reality, that very much depends on what you're playing. Generally, I found that DTS 7.1 worked well for competitive shooters, while anything with a lot of voice work was better off without it. In Star Wars Battlefront, the DTS 7.1 sounded phenomenal, helping me accurately pinpoint every Stormtrooper trying to fire at me before I ever turned to see it. In Heroes of the Storm, though, DTS 7.1 gave all of the voices an uncomfortable echo effect.

Luckily, the DTS 7.1 is easy to turn on and off, and the headset still sounds great without it. I heard Lara Croft loud and clear in Tomb Raider, whether she was jumping across perilous platforms or hunting enemy combatants with a bow. Likewise, Wolverine's snarls and growls in Marvel Heroes came across with perfect fidelity, as did his snarky one-liners.

When I tested the mic with Windows Sound Recorder, my voice came through clearly, although I sounded a bit quiet unless I put the apparatus very close to my mouth. I wouldn't recommend using it to record your next podcast, but it's fine for talking with cooperators during gaming sessions.

MORE: How to Buy a Gaming Mouse

With immersive DTS 7.1 that can be turned off at will, it's easy to see how the Siberia 350 could be an advantageous headset both for online competitions and single-player adventures.

Like most other modern SteelSeries peripherals, the Siberia 350 runs on the Engine 3 software. Because the Siberia 350 is a relatively simple gadget, the software offers very straightforward options.

Whether you use DTS 7.1 or eschew it, you can set profiles for Music, Performance, Gaming, Immersion, Voice or other presets. If those don't suit your needs, you can also create your own presets. Users can also control the lighting on the ear cups and link certain profiles with individual games and programs — helpful if you want, say, Immersion for a cinematic action/adventure game and Performance for a first-person shooter.

My only complaint about the Engine 3 compared to competitors like the Razer Synapse 2.0 and the Logitech Gaming Software is that the program does not always update automatically and, in fact, has no in-engine way of updating at all. You have to check your version, download the new version and compare the two to see if you have the latest software. It's not a deal breaker, but it's a pain.

While it won't please hard-core audiophiles, the Siberia 350 fits the bill for everyday listening. I listened to a variety of pieces by J.S. Bach, Flogging Molly, Old Crow Medicine Show and The Rolling Stones, to gauge how the peripheral handled a variety of genres. From Keith Richards' rhythmic guitar to the Gustav Mahler Youth Orchestra's stirring strings, the Siberia 350 presented a bright, clear soundscape that tended to lean a little heavy on the treble. It's not quite rich or bass-heavy enough to bring out the full musical experience, but if you're just listening to some tunes at work or watching a show before bed, you could do much worse.

On the other hand, don't expect to stash the Siberia 350 in your backpack and use it to listen to music on the subway. Because it lacks traditional audio cables, it's PC or bust. That also precludes it from playing nicely with consoles, which is too bad, as the audio and mic quality would work fine with most multiplayer titles. (To be fair, you can indeed use the headset with a PS4, but only if you have an obnoxiously long extension cord.)

At $120, the Siberia 350 is not nearly as expensive as some other gaming headsets you could buy. While it's not as feature-rich, it's also not as convoluted. With only one wire and minimal software options, it's a pretty foolproof system. For the same price, you could pick up the HyperX Cloud Revolver, which plays nicely with consoles and mobiles, but lacks surround sound and a retractable microphone. By contrast, the Siberia 350 is dead simple: Plug it in, and it works.

Although the Siberia 350 simply won't work as a portable pair of headphones or a viable console accessory, I still liked a lot more about it than I disliked. The world needs a moderately inexpensive, PC-centric headset just as it needs the more expensive, more versatile models. The Siberia 350 isn’t perfect for everyone, but PC-only gamers (or those who sit extremely close to their PS4) who don't want to spend a king's ransom may find that it's exactly what they need.