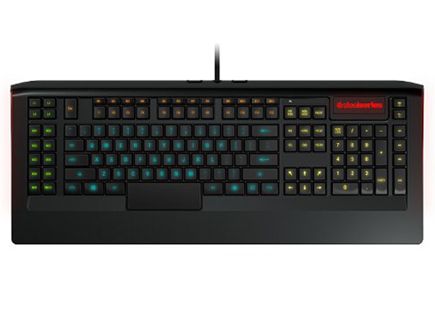 If you want more keys than you can shake a joystick at, along with pretty lights, the SteelSeries Apex is a very good choice.

The problem with naming your product the "Apex" is that, by definition, it has to be the very best one available. The SteelSeries Apex keyboard ($100) is not that, exactly, but it certainly does more right than wrong.

Make no mistake: This peripheral is overdesigned and only ideal for a very specific subset of gamers. If you need more keys than you can shake a joystick at and some fairly pretty lights to illuminate them, then the Apex is well worth your consideration.

The first thing I noticed about the Apex is that it's huge. At 22 x 8.7 inches long, it's one of the larger membrane keyboards I've reviewed, compared to 20.2 x 7.5 inches for the Razer Anansi or 19.3 x 8.7 inches for the Corsair Raptor K40. This peripheral requires a big desk and a fairly long reach, so people with short arms, be warned.

The Apex itself looks rather flat and angular, although you can prop it up on two included rubber pegs if you prefer a bit of a tilt. It has rows upon rows of more keys than I knew what to do with, but the first thing that caught my attention was the backlighting.

Many membrane keyboards let users choose a color for the backlighting, but as far as I am aware, the Apex is the only one that supports multiple colors for different keyboard sections. While it's not as granular as something like the Corsair K70 RGB, which lets you select a different color for each key, the Apex does give you five keyboard portions to play with, meaning I could create some rather appealing combinations.

Most membrane gaming keyboards feel extremely similar to their standard $20 counterparts, but not the Apex. Its keys felt much more resistant and had a satisfying spring when I released them. If you're not willing to dish out the extra few dozen dollars for a mechanical keyboard, the Apex is a nice middle ground between a cheap office product and a high-end mechanical model.

The mind-boggling number of keys on the Apex helps explain its massive girth. In addition to all standard keys and a numpad, the keyboard sports 22 macro keys (two rows of five apiece on the left, and one over each of the F1 through F12 buttons), four "layer" keys that can change the lighting profile at will, and a whole suite of media keys on the far right. The spacebar is also comically large, but its unusual size did not get in the way.

I'm not sure why anyone besides the most hardcore massively multiplayer online (MMO) game enthusiasts would need 22 macro keys, 10 of which are hard to reach. Even so, having so many options is not a bad thing, particularly since the extra keys don't interfere with the standard set of keys.

The SteelSeries Engine software gave me the most trouble of all the Apex's features. When I first tried to install this software on a Falcon Northwest desktop, it did not recognize the Apex driver. Trying to update the driver caused the keyboard to brick irreparably.

One replacement unit later, I still had to install a firmware update, uninstall the SteelSeries Engine 3 software (with which the keyboard is not compatible), install the older SteelSeries Engine 2 software, unplug the keyboard during installation (it did not recognize the updated firmware), and restart the program a few times before computer, keyboard and software worked harmoniously.

We've contacted SteelSeries to learn more about this problem. Based on my trawling of online gaming forums, this installation issue is hardly prevalent, but not exactly uncommon, either. If you decide on the Apex, be sure to install its companion software slowly, carefully and with a backup keyboard onhand in case the worst comes to pass.

Assuming you can get the software up and running, it's pretty good at what it does. You can set various options for the lighting and polling rate (how quickly the keyboard communicates with your computer), as well as reassign keys and create macros.

The experience of creating macros provided one of my few quibbles with the Apex. Although they are not hard to record, there is no on-the-fly macro recording. This means that if you're trying to time a precise skill rotation in World of Warcraft, you'll need either a two-monitor setup or muscle memory like a steel trap.

Whatever its typing quirks, the Apex is a very capable device for gaming. I played Titanfall, StarCraft II: Heart of the Swarm, Watch Dogs and Star Wars: The Old Republic, and had nothing to complain about during any of the four titles.

It's worth noting, however, that due to the Apex's macro-creation limitations, my experience with The Old Republic was not as smooth as it could have been. While I was able to program macros for my actions, I had to commit button sequences to memory and approximate the timing out-of-game as best I could. The results were decidedly mixed.

The keyboard's limited macro ability likely won't bother anyone who doesn't spend a great deal of time with MMOs. However, I question why such a person would buy a keyboard that appears to be geared primarily toward MMO play.

In spite of some software oddities and the oversight of at least one very useful feature (on-the-fly macro recording), the Apex is still a respectable piece of hardware that justifies its high price tag. For users who need a metric ton of buttons and would like to inject a little color into their keyboards, the Apex should fit the bill. Other users would be wiser to invest in a smaller option, or else go whole hog and pick up a mechanical MMO keyboard like the Corsair Vengeance K95.