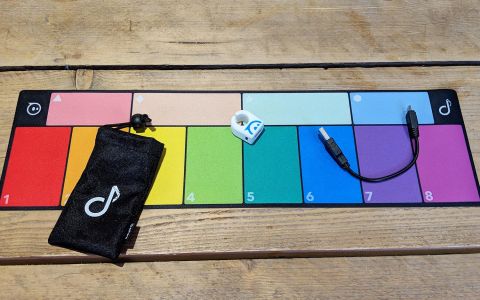 Provided its evolving apps keep you educated and entertained, this unique musical instrument will let you play and record music no matter your ability.

Sphero is best known for its programmable spherical robots, but the company is  branching out into the STEAM (science, technology, engineering, art and mathematics) subjects that are in demand in the modern work landscape.

That effort led to the all-new Specdrums device, an "app-enabled musical ring" that lets you make sounds by tapping different-colored objects. You can buy it now from Sphero's website, but there will be a retail release on April 16.

The Specdrums are designed to be both entertaining and educational, and in some ways a replacement for traditional musical instruments. The device is certainly fun to play with, but time will tell whether it's capable of sustaining the user's academic or recreational interest.

It's all well-made, too. The ring consists primarily of white silicone, which is comfortable to hold and wear and should adjust to most finger sizes. The play pad feels like a high-quality mouse mat and gives a nicely textured and stable surface for playing.

The cable is only 6 inches, though, so you won't be able to charge and play at the same time unless you get a replacement. Fortunately, the ring lasts for 2 hours of continuous usage, so you should be all jammed out by the time you need to plug this device in.

Sphero offers both the Specdrums Mix and Specdrums Music apps, both of which are free to download. Currently, Mix is available on both iOS and Android, while Music, which only recently released, is not yet available on Android. Both apps are easy to navigate thanks to smart and simple design choices, although Mix has a bit more personality with its green, prism-inspired interface.

These apps offer the two different sides of what Sphero is aiming for with the Specdrums. Mix is mostly for entertainment and is far simpler to pick up and play with. Music is a more versatile tool for recording and making your own tunes, designed with educational purposes in mind, but it's less fun to just mess around with.

Once you've downloaded one of the apps and hooked up however many rings you have via Bluetooth in the settings, you're ready to play. In the Mix app, you see a layout of multicolored panels identical to those on the mat, with eight on the bottom and four on the top.

By default, the bottom octet plays a musical scale, or several different sounds, depending on which voice pack you have enabled, while the top four are attached to preprogrammed drum or note loops. You can currently download 14 different voice packs, but Sphero says there will eventually be 50, gradually coming in future updates, and all for free.

The first loop you turn on sets the timing for the others. This means that no matter how unrhythmically you press the buttons, you'll still look like a talented iPad DJ to those watching and listening.

You can tap the screen to play the notes, but the ring is the way you're meant to use the app. When you give an object a sharp tap with the color sensor on top of the ring, the note most closely corresponding to the object's color will play. You can hold the object in place to sustain the note in some cases or just rapidly hit different things to turn the whole room into a very irregularly shaped keyboard.

When you're finished playing around with the two to four default soundboards that come with each voice pack, you'll hit a small barrier. Just like with a traditional musical instrument, you have to put effort into the Specdrums to continue to get enjoyment out of the device beyond just producing random sounds. The good news is, there are plenty of ways to enhance and change the Specdrums experience from this point.

You can swap the colors of the panels to any hue you like, providing you have an object of that color nearby that you can scan with the ring. This feature is handy if you want to "play the room," as Sphero describes it, but your room of choice doesn't have many different colours.

You can also alter the sounds, using either sounds from the same pack or a recording of your own. Anything you make in either app can be exported as a MIDI file, which means that you can easily share your creations or edit them afterward with other music-editing software. Despite having obvious room to grow, the Mix app is quite fully featured already.

The Specdrums Music app, on the other hand, is a little undercooked right now. Sphero says it plans to add downloadable/printable lesson plans to accompany the Music app, with the help of an in-house team of former academics, and more activities shared by Specdrummers themselves via a user generated content (UGC) system. Those pieces weren't present at the time of testing, but I trust in their potential once the app’s fully operational, thanks to the support Sphero gives to its existing products in the form of apps and resources for teachers and students.

You can already see some potential from the moment you open the app. The notes appear here as either a cluster of bubbles, or buttons on a vertical scale showing all the notes. But they still appear in different colors showing what you need to tap with the ring. The default setup, while not a formal lesson, is a one-octave scale, and the chords for a I-V-vi-IV chord progression. Or in less pretentious language, you have the ingredients for a four-chord song, a method of writing catchy pop tunes used by musicians for decades. With this arrangement, I could imagine a teacher explaining how a key signature works and how the different chords fit together to make a tune. The app and ring combination would make it more interesting for the student than a slideshow or textbook could ever be.

Once that's finished, you can again edit the colors, notes and chords and choose from among a few different voices. However, these are, by design, less quirky than what you can play on Mix. The record function, however, is more developed, offering a metronome to keep you in time and specific beats per minute and number of bars so you can record exactly what you need, rather than using the improvisational setup on the Mix app.

There are currently a few bugs and instabilities in the apps. There are a couple of spelling mistakes in the Music app. In Mix, I found that the ring would often disconnect or that certain notes would break and fail to sound in response either to taps with the ring or screen presses. It's a shame that these glitches are present, but the good news is that the physical products are absolutely fine. Assuming these bugs get patched promptly, I don't consider them to be a major problem.

For clarity, it's worth pointing out again that both apps can be operated by the touch screen as well as with the ring and that most of the features are accessible without even setting up a Sphero account. I wouldn't blame you for concluding from this that the ring part of the product is completely unnecessary.

However, the ring is still the heart of the product. It's very easy to understand how to operate it, stamping the ring into objects like a monarch applying their royal sigil to a wax seal. While keys, valves, strings and finger holes can be intimidating, the Specdrums ring has the approachability of a drum or woodblock, but it can produce a far greater range of notes and make you sound good even if you're carelessly tapping the play pad or any other surface in your house.

Its pocket-friendly size is a big plus, too. There aren't many functional instruments that would fit in your palm with room to spare.

The ring also helps make Specdrums so physically enjoyable to use. Sitting down at a piano trying to learn a piece of music requires a considerable amount of discipline no matter how old you are; being able to walk freely around a space with a smartphone or tablet in your hand and tap the ring against different surfaces to see what sounds you can make is a lot more dynamic. Personally, I find it a better motivation for getting up and moving around than dedicated fitness tech.

The rings provide a unique experience in that they let you play the same instrument with someone else. Since most phones can handle several Bluetooth connections at once (for example, the iPhone X can handle up to six), you can have a group of friends, or a whole band, all playing together. That will cost a fair amount to achieve, given that you can buy a maximum of only two rings at once, for £99.99/$99.99, but considering the rings work just as well on their own, it's not an absurd thing to consider buying a couple of packs to share with the group.

I can't say I see the Specdrums becoming part of an orchestra or band outside of some unusual experimental groups.ut Even so, this is exactly the kind of thing that could help spark someone's interest in music. It's cheaper than many musical instruments and often more versatile, thanks to its multiple voices and recording abilities. It will keep you or anyone else entertained as long as you have the creativity to power it. And if you're not confident you'll get enough value out of the physical product, you can try the apps for free as a kind of informal demo.

If you want to use the product for learning, it's best to wait until at least the April retail release and see what else Sphero's team of academics and other users have managed to conjure up for education purposes. My current verdict is a glowing recommendation for fun but a cautious one for learning. But thanks to the strength of the collaborative elements of the product, along with Sphero's history of providing educational apps for its products, I am optimistic that the device's musical learning potential will be excellent at some point.