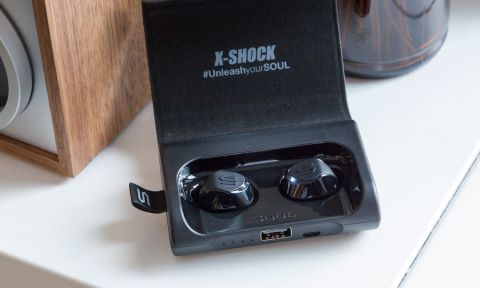 The Soul X-Shock earbuds feel good to wear, but connectivity issues and limited volume make them a tough listen.

The Soul X-Shock wireless earbuds ($169.99) offer a comfy and sporty design, making them some of the best fitness earbuds in this price range. Cool accessories and digital-assistant support give the product some edge over the competition. However, the favorable aesthetics and quirky features are overshadowed by poor connectivity.

"Inspired by athletes. Engineered for performance," is the mantra Soul Electronics preaches with the X-Shock, and that approach is clearly evident from the moment you remove these earbuds from their sleek packaging.

The biggest selling point of the X-Shock is, hands down, the rugged, ergonomic design. Each bud is coated with nanotechnology to make it sweat-resistant and waterproof, so you can breathe easy knowing the buds will survive the heavy perspiration dripping from your dome during workouts, as well as the occasional dip in the bathtub or pool. The backs of the buds are also contoured to rest nicely on the ear without causing any discomfort.

The accompanying charging case measures 3.5 x 2.5 x 1.1 inches and 4.6 ounces. While beefier than most other cases (and external batteries), its premium look takes precedence over mass. Soul applies soft-touch leatherette onto the flip cover for a texture worth holding in your hand. Open the case, and you're met with a microfiber interior to ensure the buds don't take on any scratches. The magnetic charging system and magnetic closure are two other facets that highlight the case's versatility by tightly docking and protecting the earbuds. A silky carrying case, USB charging cable, user manual, carabiner and spare set of ear tips complete the package.

The biggest selling point of the X-Shock is, hands down, the rugged, ergonomic design.

My worst fear with wireless earbuds is having them fall out while I'm running and seeing them sail down a sewer drain for Pennywise to keep. It's a relief how snug and secure the X-Shocks feel in my ears. Soul doesn't offer instructions on how to fit the buds properly, but the process is pretty common amongst all earbuds: Insert to where they sit right on the concha, and turn upward to lock in place.

I had reservations about the ear tips that came on the earbuds, because they're much smaller than the competition's tips. But to my surprise and satisfaction, they gripped right onto my ears and held firm as I enjoyed runs around the neighborhood. They're just as comfortable to wear while  bike riding and lifting weights.

The X-Shocks do have a bit of heft, but they never weighed me down or hurt my ears.

Each earbud weighs 6 grams, which is lighter than upscale models like the 8-gram Nuheara IQbudsand the 8-gram Samsung Gear IconX. I found it a bit comical that the extra ear tips were smaller than the ones already attached to the X-Shocks. Still, the shortage of tips didn't bother me much. That's not say to it won't affect users with unique ear shapes, though.

Depending on your ear shape, you might feel the X-Shocks stick out, but the black version blends well with most outfits to make the buds' presence more incognito. They're also compact enough to carry around and occasionally lose. If you're prone to misplacing everyday-carry items like I am, consider the Transparent White Edition, because its transparent casing is easier to identify in dark areas.

Soul makes pairing the X-Shocks as simple as can be. Enable the Bluetooth on your device and turn on the earbuds by pushing down the button on either earbud for 2-6 seconds. Then, select them from the available devices list on your Bluetooth device. The process shouldn't take longer than 30 seconds.

Each earbud has one button that controls call function and media playback. The same button can activate Siri or Google Assistant depending on your device. I was pleasantly surprised to learn that the earbuds picked up audio commands fine and executed emails and text messages without a hitch. As smooth as this sounds, activating the feature proved to be cumbrous.

Listening to Nirvana's "Come As You Are" warranted positive vibes, with the 5.8-millimeter drivers doing a fine job projecting the song's iconic guitar riff and warm vocals.

The instructions state to hold down the left earbud for 1 second to access either digital assistant. Holding down the button for a second longer can power on or off the entire set, making the assistant frustratingly difficult to initiate.

I tested the X-Shocks across several music genres, including alternative rock, classical and hip-hop. Granted, the X-Shocks don't bear the audio prowess of higher-end earbuds like the Bose SoundSport Free, but they do promote a fairly wide soundstage with well-balanced bass and good clarity.

Listening to Nirvana's "Come As You Are" warranted positive vibes, with the 5.8-millimeter drivers doing a fine job projecting the song's iconic guitar riff and warm vocals. The bass response was pretty solid, though it definitely hits harder on kick-drum-heavy records like The Throne's "No Church in the Wild," with Frank Ocean's hook sounding cleaner than expected. The SoundSport Free offers cleaner sound, but the X-Shock can hold its own in most audio categories.

HD videos sounded just as impressive. The clarity of the piano keys at the beginning of the Avengers: Infinity War trailer theme intensified the viewing session, with Thanos' monologue adding to the chill factor. Netflix videos performed just as well.

Adequate as the X-Shocks are for audio, they're not exactly the loudest wireless earbuds on the market. I amp myself up by cranking songs at max volume. So, suffice to say, Axl Rose's snarling vocals on "Welcome to the Jungle" were caressing my eardrums instead of banging on them. Now, don't get me wrong — the volume levels are acceptable for personal listening. You'll just find them to be less impactful, which doesn't exactly help when gearing up for intense exercise.

Despite the absence of active noise cancellation, the X-Shocks do a good job blocking out ambient noise, but only at max volume. With a good seal, you should be immersed in your playlists without distractions from any background fracas.

As dynamic as the design and features are on the X-Shock, they can't atone for the connectivity issues.

My hands-on with the earbuds saw a respectable 3 hours of playback. This is right on target with most other entry-level wireless earbuds.I did get a good three to four workouts from them before tossing them into the charging case, which is rated for up to 50 hours of on-the-go power courtesy of its 3,000-mAh battery. That's equivalent to about 16 extra full charges. Keep in mind that this number drops significantly if you use the case to recharge other USB-compatible devices. My Google Pixel 2 XL swallowed about half of the charging capacity.

As dynamic as the design and features are on the X-Shock, they can't atone for the connectivity issues. Soul claims the X-Shock features a gold-plated antenna for improved wireless stability. Sadly, it didn't prevent the right earbud from consistently dropping out, forcing me to tap on it a few times to establish a connection. This wasn't my idea of fun when running on a treadmill. I had to check first to see if if my smartphone was responsible for any interference, but that was not the case here.

The X-Shocks do come with automatic repairing. However, the feature isn't as spot-on as in other earbuds, like the Zolo Liberty+. Not to mention that every time I took the earbuds out, I had to power them on by holding down the button on the right earbud. This becomes tedious after a while. In addition, I noticed minor audio lag when streaming video content but not when playing movies stored on my laptop.

When the earbuds did work without any dropouts, Bluetooth range held up, with no stuttering as I moved from room to room. I even managed to go down two flights of stairs and take out the trash minus any hiccups. So, these earbuds can extend up to 30 feet (possibly farther) in open spaces, as advertised.

I took a few calls from my girlfriend on the X-Shock, and the results weren't great. For starters, only the right earbud works during calls, making this a mono situation. The sound is lower than expected, even at max volume. Much of the conversation was muffled from both ends. Also, the microphones are incredibly sensitive to ambient noise and picked up every echo in my apartment, including the creeks from my wood floor. It wasn't until I laid in bed motionless that she could hear me clearer. At least the connection held up when I walked through different areas.

Even though the Soul X-Shocks are some of the best-fitting earbuds on the audio block, it's tough recommending a product whose low volume and poor connectivity hinder its overall performance.

Such shortcomings certainly don't warrant the $170 price. It's a shame, too, because the X-Shock stands out as a great workout companion with a quality soundstage. Nonetheless, you can find more-favorable alternatives with better Bluetooth and louder tones at both lower (Zolo Liberty+, $149.99) and higher prices (Nuheara IQbuds, $270.00).