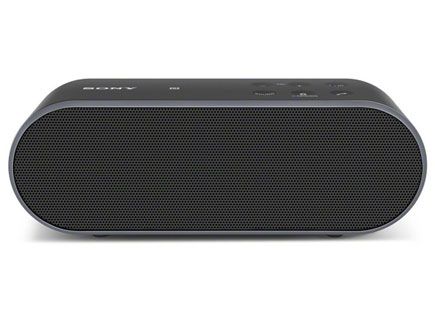 If you value balanced sound and an affordable price the most in a Bluetooth speaker, strongly consider the Sony SRS-X2.

Portable Bluetooth speakers balance price and performance against size. While many go small at the expense of sound quality, the $80 Sony SRS-X2 finds a sweet spot between affordability and sound. Its form and limited battery life make it best suited to people who listen mostly in one spot, but they'll be rewarded with excellent audio.

The 6.8 x 2.3 x 2.3-inch Sony SRS-X2 has a long, pill-shaped design with rounded ends, in contrast to the boxier, squared edges of the 6 x 2.3 x 1-inch Jawbone Mini Jambox. While the SRS-X2 isn't much longer than the Mini Jambox, it's twice as wide, which limits its portability — you can't stuff it in your pocket as easily as you can with the Mini Jambox or the 5.9 x 2.5 x 1.2-inch Soundfreaq Pocket Kick. At 17 ounces, the speaker also weighs noticeably more than other portables; for example, the UE Mini Boom is just 10.6 ounces.

The speaker comes in black, red or white, with both the soft rubber outside and the metal grille matching in color. I tested a black model.

On top, Sony placed volume, power and Bluetooth pairing buttons, along with a button to answer or ends calls. There's also a button for a surround-sound music option, which creates the illusion of a wider field of sound. The back includes a 3.5mm auxiliary input and the micro USB port for charging the battery.

The SRS-X2 offers little in the way of status indicators — when it's on, a single green LED lights up above the power button. This light also functions as the only battery-life indicator; it turns orange when the battery is low. (The device's documentation doesn't specify at what percentage the light changes color.)

I easily connected the SRS-X2 via Bluetooth to iOS and Android devices. If you have an Android that supports NFC, you just place the mobile device on the speaker's "N" mark and then accept the connection. On iOS devices, you put the speaker into pairing mode by pressing the Pairing button and finding SONY:SRS-X2 under Other Devices on the Bluetooth Settings screen.

Unlike the Mini Boom, the SRS-X2 doesn't include an app to extend the functions of the speaker. The only adjustments you can make to the sound is to engage surround sound, which boosts the vocals and virtually expands the width of the sound.

Sony claims that the unit can receive a signal from up to 30 feet away, and I found that to be accurate. Even with walls in the way, it maintained a consistent stream — something many portable Bluetooth speakers struggle to do.

The SRS-X2 nicely balanced the bass, midranges and treble, producing an overall warmer sound than the Mini Jambox and less-harsher audio than the UE Mini Boom. On Mark Ronson's "Uptown Funk," the bass sounded richer than it did on the Mini Jambox — the extra size of the SRS-X2 pays off in the deeper low end. However, I found that vocals on some songs got lost in the mix. For example, Rihanna's part on "FourFiveSeconds" blended more into the strummed guitar than it did on the Mini Jambox. Pushing the Sound button to engage surround sound on the speaker helped the vocals stand out more.

The SRS-X2 performed particularly well on acoustic music. Joshua Bell's violin resonated richly on Bach's "Violin Concerto No. 1 in A Minor," as did the acoustic guitars on The Beatles' "Norwegian Wood." Many portables, including the Mini Boom and the Pocket Kick, make these songs sound flat and unrealistic.

In terms of volume, the SRS-X2 can get loud. Running off of battery, it pumped out about 90 decibels, though it started to sound distorted around 80 dB. That's similar to what I experienced with the UE Mini Boom. But if you plug the AC charger into the micro USB port, you can get some extra juice. It maxed out at about 95 dB, though it sounded better at 85 dB.

The speakerphone on the SRS-X2 was on a par with the quality of the Mini Jambox and Mini Boom — it helped make the voices of people I spoke with louder and fuller. People I talked to said my voice sounded about the same when I used the SRS-X2 as it did when I spoke through the iPhone's built-in speakerphone.

You can answer and ends calls by pressing the phone button on the top of the speaker.

Sony says the SRS-X2's battery will last 5 hours when fully charged, and I found that to be a conservative estimate. I listened for at least 7 hours over the course of a few days without needing to recharge the device. Still, that's a few hours less than you'll get on the Mini Jambox and the UE Boom, both of which last more than 10 hours.

The SRS-X2 charges via a micro USB port and comes with a wall plug for the USB cable — something few units at this price include.

The Sony SRS-X2 has a lot going for it. At just $80, it's less expensive than the $100 Mini Jambox, and it produces better overall sound than similarly priced Bluetooth speakers. In exchange, you get a less-portable unit and less battery life. If you want more freedom to take your music with you, the Jawbone Mini Jambox would be a better option. But if you plan to mainly keep the speaker at your desk or on your counter, the SRS-X2 is a solid choice.