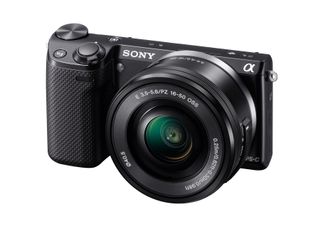 In addition to the DSLR-style a3000, Sony has unveiled the updated NEX-5T mirrorless compact camera. The NEX-5T features a 16.1 megapixel Exmor APS HD CMOS sensor – identical in size to the sensors found in traditional DSLR cameras, but in a compact body that's not much bigger than most point and shoots. The camera can also capture Full HD videos (1080/60i or 1080/24p).

The NEX-5T is the updated model over last year's NEX-5R, but adds NFC (Near Field Communication) for quicker and easier data transfer between compatible devices. The NEX-5T can also pair and transfer data with non-NFC devices through Wi-Fi and Sony’s PlayMemories Mobile application, available for both the iOS and Android.

Those pairing the camera with a smartphone or tablet can also use the "Smart Remote Control" feature for live image previews, tweaks, and even control of the shutter button.

The NEX-5T is fully compatible with the existing PlayMemories Camera Apps, which can add features such as time-lapse recording, and direct uploading to social networks.

“This new camera carries on the NEX-5 series’ strong tradition of compactness and high performance,” said Mike Kahn, director of the interchangeable lens camera business group at Sony.  “Available in a convenient, travel-friendly package with the compact SELP1650 power zoom kit lens, it’s the ideal choice for step-up point-and-shoot users, smartphone photographers who want higher quality images and even photo enthusiasts who are looking for a more portable alternative to replace their DSLR.”

The NEX-5T compact system camera will be available in September in silver, black and white for about $700 in a kit with a 16-50mm motorized zoom lens (model SELP1650) or as a body-only for about $550.