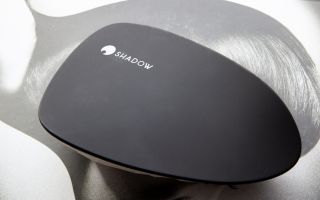 The Shadow Ghost is a gaming console that's also a gaming PC. Sort of.

Setting up the Shadow Ghost is much simpler than I expected, although it requires a lot of information and equipment on your part. The Ghost itself is a sort of solid paraboloid, with lots of crosshatching and a stark black/white color pattern. I appreciated the fact that it's trying to do something different, and does so with some conviction and style.

The system comes with four USB ports, an Ethernet port, a 3.5 mm audio port, as well as Bluetooth and Wi-Fi connectivity. You'll be able to use pretty much whatever gaming peripheral you want.

However, all the Ghost comes with is a power cable and an HDMI cord. If you hook up the Ghost to the TV out of the box, it won't actually do anything. Instead, you need to supply your own mouse and keyboard — which, as you can imagine, isn't exactly inviting for the everyday gamer.

Standard productivity and gaming equipment don't have long enough cords for living room play. Wireless productivity equipment isn't optimized for gaming. Wireless gaming gear is extremely expensive. Imagine buying a brand-new Xbox or PlayStation, then discovering that you need to buy a controller separately, and you've got the basic idea.

From there, you need to sign into your Shadow account, and it will then connect you with your very own remote gaming PC. As far as I can tell, Shadow reserves one PC per user, since when I first signed in, I had to set up the computer from scratch, Cortana prompts and all. (The Ghost stopped recognizing my mouse and keyboard when it transitioned from the sign-in screen to the Windows 10 interface, which was odd, but swapping them into alternate USB ports seemed to alleviate the problem.)

It was here that my first concerns about the Ghost surfaced. You have your very own remote machine somewhere in France. All well and good. But that means you'll be signing into your Microsoft account, your Steam account, your Blizzard account, your Nvidia account and whatever else you need to game. You could, theoretically, install Microsoft Office or TurboTax or Adobe Photoshop, and work on personal projects — and before you laugh off this idea, remember that if you are spending $35 per month on the Shadow service, it's almost certainly because you don't have a very powerful PC at home.

But while the computer is yours for as long as you subscribe, you don't have physical access to it. It's located in a server farm somewhere in France. While it's unlikely that an unscrupulous employee or enterprising burglar would want anything to do with your data, it's not impossible. Having a PC with sensitive information that's not under your direct supervision is a security risk, however slight, and I wonder whether it's one most gamers will be willing to take.

Once my remote PC was up and running, I was able to operate it like any other Windows 10 computer. The first thing I did was investigate the specs, which are impressive: 128 GB RAM, an Intel Xeon E5-2667 3.20GHz CPU and an Nvidia Quadro P5000 GPU with 16GB memory. Shadow boasts that you can run almost any game on the market in 4K resolution at 60 frames per second. This claim varies considerably, depending on the game and its settings, but it's a powerful machine either way.

That's why I was baffled when I discovered that the remote PC had a 256GB hard drive, and nothing else. I'm not sure why Shadow opted to build these remarkable machines, and then give them only enough hard drive space for a few hit titles. After I'd installed all the requisite gaming platform software, I had precisely enough room for two big games: Destiny 2 and The Witcher 3. After that, I was down to a paltry 1.6 GB of storage space.

Because Shadow's computers have access to extremely fast internet (at least 300 Mbps, in my experience), you can, theoretically, uninstall and reinstall games as needed. But this is an arduous process, and even baseline PS4s and Xbox Ones come with 500GB storage; almost twice as much as Shadow's remote machines. Storage isn't expensive, and even an additional 500GB would make a world of difference, so this decision is a confusing one.

But, all gripes aside, the Ghost delivered on its promise of lag-free remote gaming. Using 30 Mbps of my 50 Mbps connection at home (you have to set your speed manually, which is a pain), I booted up The Witcher 3 and let loose in the Northern Kingdoms. With 1080p resolution and all the settings turned to Ultra, Geralt could walk through the intricately detailed world at around 80 fps, ride a horse at around 70 fps, traverse a crowded marketplace at around 60 fps and fight off multiple enemies around 50 fps.

Destiny 2 offered a similar experience, with a frame rate that hovered between 50 and 90 on 1080p with settings turned up as high as they would go. Like The Witcher 3, Destiny looked smooth and seamless, with sharp textures, nuanced lighting and fine details on everything from enemy ships to character armor. I wasn't able to test the system with a 4K TV, but you could most likely get 60 fps on demanding games like these, provided you were willing to turn down some of the tertiary graphical settings.

I even ran through Age of Empires: Definitive Edition, just to see how the Ghost would handle that notoriously PC-centric genre, the RTS. I was able to build up my base, create units and wage warfare without a hitch.

And yet, for all that the Ghost gets right, there were a few things that grated on my nerves the longer I used it. As previously mentioned, the Ghost gives you access to a full gaming PC. That means that you're responsible for its upkeep. When I tried to install Windows and GeForce updates, the system outsmarted itself. Whenever you shut down Windows, the Ghost disconnects you from your remote machine.

However, the Ghost is not very good at telling when Windows has been disconnected, and when it's temporarily resetting files. During a large update, the Ghost disconnected me from my remote PC, and refused to let me log back in, since it considered the most machine to be "shut down." And remember, you can't do a hard reset of your computer, since it's located in a Shadow office somewhere. If your system ever locks up, you'll have to get in touch with Shadow's tech support to fix it.

Naturally, this also means that you can never access the BIOS, so overclockers and other hardware junkies need not apply. Shadow claims that it will upgrade its PCs "regularly"  to ensure peak performance, but this does entirely remove the DIY customization options that help define PC gaming. (In fact, I talked with a representative from Shadow, who explained that the systems just underwent a major hardware upgrade last week.)

There was also an issue where the color on my TV screen looked too bright and washed-out. The Ghost offers a single "color" switch that it recommends you toggle if you encounter this issue, but you can't tweak color options in great detail, as you would a gaming monitor. (Tweaking the details on your own TV/monitor does only so much, since there's a daisy-chain between you and the PC.)

Bluetooth is another small bone of contention. Since my remote PC was thousands of miles away from my Xbox controller, I couldn't connect it via the Bluetooth menu in Windows. The Ghost sidesteps this problem by offering you a Bluetooth connection option during sign-in. It's a relatively painless process, but you need to know before you sign into your remote machine whether you want to connect a Bluetooth peripheral. Otherwise, you'll need to go back and forth between the remote PC and the sign-in screen.

Finally, there was a performance issue that I couldn't quite put my finger on. There was no "lag" in the games, and the frame rate was remarkably consistent. But there was always a slight feeling of disconnection between my input on a mouse/keyboard/controller, and my actions on-screen. I tested The Witcher 3 on my home PC just to make sure I wasn't imagining it.

Sure enough, my own computer gave my controls a feeling of immediacy and precision that I just didn't get with the Ghost. This may not bother someone who's coming to the Ghost from a position of unfamiliarity with PC gaming. But for a longtime PC gamer, it's hard to shake the feeling that something is just undefinably "off."

I came away from the Ghost both impressed with its performance, and confused by its value proposition. Building a PC like the one the Ghost offers would cost about $2,000, so you could use the Shadow service for more than four years and still come out in the black. And you really can play big-budget games on top settings, with high frame rates and no lag.

But it's not good for casual gamers, who could get an Xbox One or PS4 for less money than a year of Shadow's service. It's not good for hard-core PC enthusiasts, who can't upgrade its hardware over time by themselves. It might be good for experienced gamers who are just getting into the world of living room PCs — but so would an entry-level gaming computer, which often cost less than two years' worth of Shadow's service.

The Ghost is a solid device that streams games better than I anticipated it would. It has the potential to be a useful tool in PC gaming's growing arsenal — if it can get in front of the right audience.