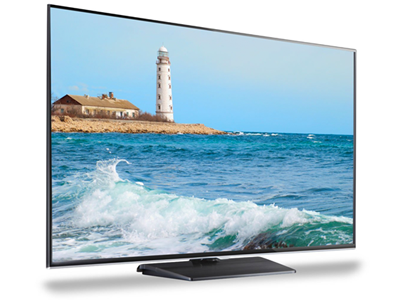 Who's it for: Videophiles in cramped quarters.

Samsung has been at the forefront of the Smart TV movement, and even the company's lower-price models are impressively decked out with features. The 32-inch H5500 is no exception, and it was also a top performer in our testing, producing an excellent picture on its 1080p screen across all video sources. The only downside, other than a Frankenstein's monster of a remote control, is a relatively steep price of about $400 for a small screen. In comparison, the $300 Vizio M322i-B1 isn't quite as good but still produces good-enough images for most people.

All of the 32-inch TVs I tested were extremely lightweight, and the UN32H5500 is especially so at a scant 11.7 pounds. Its thin bezel is attractive, though I'm not in love with this TV's curved, wedge-style base: While good looking enough, it flexes far too easily. Even a table bump causes the panel to rock quite a bit.

At the rear of the set is a full array of jacks: three HDMI ports, two USB 2.0, and both digital and analog audio-out. The chassis lacks physical control buttons, which I personally prefer to have as a backup for a lost remote. But others may not mind.

Ease of Use: Very Friendly

Samsung's interface is way friendlier to use than those of many other sets: Setup is simple, with a straightforward wizard. (Some menu items use poor English, but no biggie.)

Hit the Source button, and a large dock drops down from the top of the screen with large text and instantly recognizable icons (HDMI, a USB drive, antenna, etc.), a welcome departure from options that are text only or that require a series of button presses to navigate. Likewise, adjusting the volume brings up a large icon to the side of the screen, though volume control annoyingly makes a noise for every button press. Yes, just like Samsung Galaxy phones.

I found navigating menus and, crucially, engaging with the Smart TV apps (see below) to be smooth and lickety split. The lack of lag is attributable to the set's burly quad-core processor.

The major failing of the UN32H5500 is the massive remote, chockablock with too many options to be comfortable for anyone. For instance, holding the remote to access the D-pad at the bottom makes it impossible to reach the volume or channel rockers, unless you have Andre the Giant's hands.

In another odd choice, Samsung failed to incorporate useful shortcuts for switching picture modes without having to call up the main settings menu first. Still, the backlight and programmable buttons are pluses.

Click the dedicated SmartHub button on the remote, and a dock of Internet-based media "apps" pops up at the bottom of the screen. The interface is fast and responsive, and intuitive for anyone who has ever used a smartphone or tablet. Samsung has a marketplace of free and paid apps that range from marquee streaming services (Netflix, Hulu, Pandora) to more niche options (foreign TV networks) and even dubious ones — a Web browser that doesn’t rate against the one in your handy smartphone. Still, the UN32H5500 is smart enough that many users could forego a dedicated streaming box like a Roku or Apple TV.

Despite extensive features, the Samsung offers just four picture presets: Dynamic, Standard, Natural and Movie. (Many sets offer a gaming-specific preset or one for sports; the 32-inch Vizio M322i-B1 has six modes, for instance.)

The Movie mode posted the best out-of-the-box test results, and was my favored default mode for real-world viewing.

Color: Too vivid without tweaks

As with every set I tested, the Dynamic mode (sometimes called Vivid by other brands) on the UN32H5500 is a psychedelic riot of fluorescent color rarely found in nature. The Natural mode was anything but. However, the default Standard mode produced refreshingly lifelike color. In streamed episodes of Orange Is the New Black, skin tone was lifelike for both black and white actors.

When watching a DVRed 720p NFL game, Standard mode fell flat. Colors became too saturated, making the field a shimmying neon mess. Movie mode, which turned in by far the best lab test results, balanced things out considerably. But as with best lab settings for other sets, it sacrificed brightness and sharpness, creating a more soft-focus image with a slight yellowness to skin tones. Still, in a Blu-ray of Gravity, the universe looked awesome and detailed with Cinema's warm colors.

Detail: A big step up

The difference between 1080p and 720p resolution has often been downplayed at lower screen sizes, but I've found that 1080p sets look much better in real-world use. Most dramatically, lower resolution 720p sets show stairstepping in on-screen graphics and text — when angled lines look like stacked blocks — while 1080p models produce smooth, crisp lines.

This gap really became apparent with Blu-ray films. The 1080p Samsung UN32H5500 produced fine, subtle detail — for example, in Gravity, the various textures of Sandra Bullock's space suits and even writing on signs posted in the International Space Station.

Viewing 480p DVDs on the 1080p display, on the other hand, revealed in painful detail how low resolution the source material is, which was the case with all 720p sets except the Sony KDL-32R420B (which employs some better built-in software). Gravity, in particular, became a dark shadowy mess.

For many viewers, it's likely a nonissue if they solely watch 720p or 1080p content, but those with an extensive DVD collection will want to rely on a good quality upscaling player, such as the $85 LG Electronics BP540, rather than the Samsung TV's internal processing.

With all of our test content, the Samsung UN32H5500 produced bright whites and excellent contrast with plenty of shadow detail — and none of the muddiness we experienced with other sets. Our lab results back that up: The TV's gamma (a measurement that in part reveals how well a set can reproduce shadow detail) came in at 2.27 — indistinguishable from and far closer to the ideal of 2.2 than any other 32-inch models we've tested.

Sound from the UN32H5500 overall was somewhat muted and flat compared with some other sets, most notably the Sony R420B. However, the audio was distortion free at high volume. You can thank the modest bass response for that, which won't awaken the neighbors anytime soon.

Samsung's $400 UN32H5500 is capable of fantastic picture quality and is blessed with smart features, making it future friendly (if not future proof). I had to spend some time swapping picture modes to land on a sweet spot for different material, but the results are worth it. I also appreciated the user-friendly and swift interface. Still, in the 32-inch category, the Vizio M322i-B1 offers a better remote — complete with a keyboard — and is $100 cheaper, making the Samsung an excellent but strictly top-shelf option.