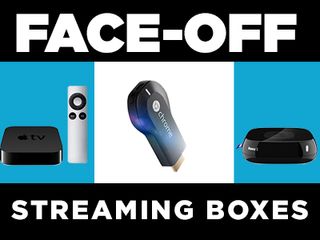 Roku vs. Apple TV vs. Chromecast: Which Device Wins?

There's an over-the-top battle going on to deliver streaming, Internet-based entertainment to the living-room TV. From storage companies to consumer-electronics firms, and Blu-ray players to smart TVs, there's a wide array of such devices, but the most straightforward approach is to buy one of the popular set-top boxes — from Roku, Apple or Google — for streaming content to your HDTV.

Roku was founded nearly 12 years ago by one of the creators of the DVR, Anthony Wood, and the company has built its popularity on one idea: simplicity. Apple TV has the backing of legions of fans and an iTunes ecosystem that, although less inclusive than others, keeps things easy for paying customers. And then there's Google's Chromecast, which, at a fraction of the size and cost of the other two devices, promises to completely upend the streaming-services market.

Currently, in terms of market share, there's Roku, Apple TV — and then everyone else. The question is, can Google turn the duopoly into a triumvirate with Chromecast? We tested all three to find out which device is best for you.

Current page: Roku 3 vs. Apple TV vs. Chromecast: Which Is Best?