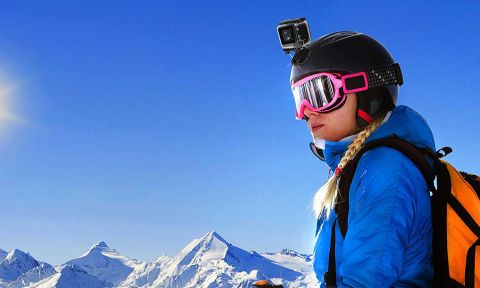 Cheap describes both the price and the performance of the Pyle SereneLife Action!

It might look eerily like a GoPro, but the Pyle SereneLife Action! Camera is nothing like the class leader when it comes to performance. The camera's image quality was unfathomably bad: overexposed, underexposed and murky, and with horribly inaccurate color.

Given all that, the ability to shoot at 4K resolution doesn't mean much. Bad is bad, no matter how many pixels.

The Action costs less than half as much as premium cameras from GoPro and Garmin, but it's not worth even that price. If you want to save money, go instead with the GoPro Hero Session — a great model from 2015 that's now a great deal at about $200.

If you've seen GoPros from years past, you'll recognize the Action, which roughly apes the Hero4 Silver. It measures a few tenths of an inch smaller, at 2.3 x 1.6 x 0.8 inches, and is quite light, at 2 ounces, versus 2.9 ounces for the Hero4 Silver.

The lesser heft seems to come from the light, cheap-feeling plastic that encloses the camera. The Action features a 2-inch LCD screen, but it's not a touch screen.

The Action fits into a clear protective case, just like old GoPros. Pyle advertises that the case is waterproof to 98 feet, according to its product page on Amazon.

The camera also comes with a minimalist frame called the "Back Clip" that goes around the edge of the camera, saving bulk and weight. Both feature the same slotted connectors that GoPro's own cases and housings use, making the Action compatible with GoPro mounts.

Controls and Usability: Simple but serviceable

The lack of a touch screen makes the Action harder to use than the latest rivals from GoPro and Garmin, but it does well with what it's got: buttons on the top, front and side (similar to on older GoPros).

Pressing the front button turns on the camera and toggles through modes, such as video, photo and settings. The shutter button on the top doubles as a Select button for menu items, and a pair of up/down buttons on the side let you scroll through menus. The setup is actually quite logical.

You can also control the camera through the XDV smartphone app for iPhone and Android. It's a simple but easy-to-use variation on the apps that come with other action cameras. It features a live preview window, with buttons below to record video, take a photo or shoot in slow motion (720p at 120fps). You can rotate the phone to landscape mode for a full-screen preview, as with other apps.

It was actually easier to connect the Action than it was to connect the mobile apps from rivals Garmin and GoPro to their respective cameras, and it involved fewer glitches.

Like other apps, XDV also allows you to review photos and videos on the camera and change settings, though it offers fewer advanced options. You can lighten or darken the auto-exposure or choose a preset white balance, for instance, but you can't change ISO or engage high-dynamic-range settings.

It's truly surprising how bad the image quality of the Action is. I tried the camera on different days and in different settings, yet I saw the same murky, blurry video and photo quality every time.

This clip, shot along San Francisco Bay, illustrates all the problems. Colors are dull and tinged with yellow. Details are blurred and fall apart completely when the camera is jostled. Audio is almost completely muffled, due to the waterproof case, which lacks an input for the mic (unlike the new Garmin case).

For a comparison, see how the GoPro Hero5 Black rendered the same scene.

You may notice the Hero5 Black at the bottom of the Action video sample, as the two cameras were mounted on the same bicycle helmet. This shouldn't have had an effect on the Action! video, such as messing up autofocus, since the Hero5 is toward the edge of the frame.

But to be safe, I tried some handheld clips while jogging in a park a few days later. The results were about the same, as you can see in this video, with the Action clip followed by the GoPro's.

The Action segment is so overexposed that you can't even see the houses to the right of the trail. That whole portion of the screen simply appears white. Very little detail can be made out in the foliage or the walkway.

The patterns are the same in still photos; here, for variety, is a comparison with images shot by the Garmin Virb Ultra 30 action camera. The Action 16MP photos have a narrower field of view, but beyond that, they stand out for a lack of detail, inaccurate colors and minimal shading.

Low-light performance wasn't as bad as I'd expected. But it's still blurry and far behind the competition, as you can see in these video clips, first from the Action then from the Hero5 Black.

The Action has a smallish, 1050mAh battery that the company estimates will last for about 90 minutes, though Pyle doesn't specify at which video resolution or frame rate. I tested it at 1080p/60fps, and got about 2 hours and 13 minutes of battery time — which is quite good. The new GoPro Hero5 Black, for instance, managed 1 hour and 58 minutes.

The Action has a microSD slot, and the company specifies a maximum card capacity of 32GB, which should hold about 2 hours and 20 minutes of video at 1080p/60fps.

Pyle does pile on the accessories. The Action comes with the waterproof case and a back clip, a bicycle handlebar bracket, a suction cup mount (say, for the hood of a car), and a bike helmet mount held in place by a strap.

Pyle also includes a wireless remote that can be worn on the wrist and that features three buttons: power off (but not on), take photo and shoot video. Like the camera itself, the accessories are of low-grade plastic that feels lighter and flimsier than that of name-brand camera makers.

MORE: How Many Megapixels Do You Really Need?

Pyle packs a lot of features and equipment into the SereneLife Action! camera, but this device is not equipped to capture attractive images. If you want to spend less than $200 on an action camera, get the GoPro Hero Session instead.