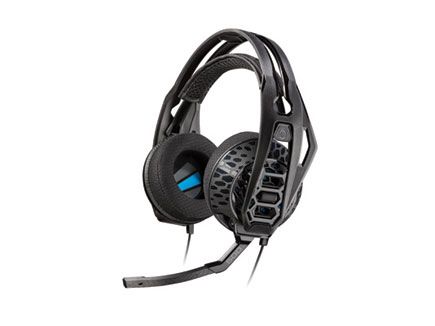 The Plantronics Rig 500E is a one-of-a-kind competitive-gaming headset with swappable ear cups and impressive sound.

As competitive gaming grows more and more massive, gaming peripherals are evolving to support those users who strive to be the best. The Plantronics Rig 500E ($149) is a prime example of that evolution, with a modular design that lets you switch out ear cups for varying levels of comfort and performance, as well as swap in headbands that proudly display your team colors. The Rig 500E's cozy fit and customizability make it stand out in a sea of gaming headsets, and it has excellent sound quality to boot.

Editor's Note: We reviewed a pre-release version of the Rig 500E, which shipped without 7.1 surround-sound functionality. Once we get to test the headset's surround sound, we'll update this review.

Adjusting the Plantronics Rig 500E to your liking is like playing with Legos — in a good way. Built for competitive gamers, this fully modular headset allows you to quickly swap out the ear cups, inner head strap or outer headband in order to represent your team colors and find the perfect fit.

The Rig 500 that comes out of the box is all black, with a rigid, plastic outer headband surrounding the rubber, head-conforming band below it. By default, the inner headband features a soft, sporty slip-on cover with a logo for ESL (aka, the eSports League, Plantronics' competitive gaming partner) on the top. As an amusing touch, the headband reveals a small graphic of a man whose afro grows increasingly larger the higher its raised, much like the standard Rig headset.

The headset's ear cups are circular, and can pop into one of three different holes on the headband for different head sizes. The Rig includes a pair of pleather, noise-isolating ear cups with slick, ridged exteriors, as well as a plush set with a vented outer design that reveals the blue material beneath. Both sets sport blue-and-silver ESL logos on the inside.

My one issue with the Rig's design is that there's no clear indicator of which ear cup is the left or right one, something that could prove especially confusing when you're swapping them out.

Based on my testing, the Rig 500 lives up to its modular promise; removing and replacing the ear cups and head strap from the outer band was a breeze, and the pieces always felt secure when I wore the device. While the headset's default appearance is more of a blank slate, gamers can outfit it with their own colors and logos, such as those of their pro gaming teams, when they order the Rig from the company's website later this year.

Some small gripes aside, the Rig 500's super-lightweight, 7-ounce construction allowed me to work and play comfortably all day. The flexible, mesh-covered headband conformed nicely to my noggin, and each set of included ear cups provided its own unique benefits, despite being a bit too small for my big ears.

The pleather, isolating ear cups sounded better (more on that later) and I enjoyed the feel of their softer, snugger exteriors. The plush, vented cups didn't quite immerse me in the same way, but felt lighter and gave my ears more breathing room. Because of this, I found myself throwing on the pleather cans for short bursts of superior sound, but switching to the plush ones when I knew I'd be gaming for a while.

Armed with 40mm drivers, the Rig 500E delivered strong audio performance across a variety of genres, regardless of which ear cups I used.

I wore the cans while playing some Assassin's Creed Unity on PC to test their ability to capture atmosphere, and was sufficiently immersed. I could pick out individual bits of conversation while sneaking through a shouting mob, and could pinpoint exactly where small background details, such as dog barking and fly buzzing, were coming from. I heard plenty of detail when running across dirt or water, and the sound of my character unsheathing his blade and stabbing an enemy was satisfyingly sharp.

I switched over to my Xbox One to play some competitive titles, and enjoyed the same high level of quality. The headset's impressive directionality shone once again during a few intense rounds of Halo, as I could easily tell where enemy footsteps and gunfire were coming from. Mortal Kombat X made for a great showcase of the headset's crispness, as I heard every thundering punch, crushing kick and spine-crunching finisher in excruciating detail.

Throughout my play sessions, I found that the isolating ear cups provided better overall quality. Their pleather coating did a nice job sealing in game audio, and the action generally sounded louder and bassier. The vented cans still doled out plenty of detail, though, so you won't be penalized if you prefer the more breathable ear cups.

Plantronics knows a thing or two about making great headphones, and fortunately, that audio expertise showed when I jammed some music on the Rig 500E. The crushing guitars and drums of Four Year Strong's frenetic rock tracks sounded crisp, and I heard each song's addictive vocal melodies clearly amidst the chaos.

I had a similarly great time blasting Kendrick Lamar's "King Kunta" on the cans. The song's bass was positively thumping, and I heard every unique wrinkle of Kendrick's unmistakable vocal delivery. My music sounded clear on both sets of cups, but as with my gaming sessions, I found that the isolating ear cups provided better bass and fuller overall sound.

The Rig 500E features a removable, noise-cancelling boom microphone, with a highly flexible rubber coil that you can bend as far left or right as you need. Despite the microphone's malleability, however, I found it to be pretty far from my mouth no matter how I flexed it.

Fortunately, this didn't stop a colleague from hearing me clearly as we chatted over Skype. None of my words were lost when chatting through the 500E, though my co-worker did note that I sounded a bit distant from the mic, likely due to its short length. To mute the mic, you simply flip it all the way up, a feature that worked as advertised during my chats.

While the 500E's mic works just fine, there aren't any in-line or on-ear controls for changing chat or game volume on the fly. While not a major problem for casual play, the lack of volume controls may put off those who like to tweak levels in the middle of a tense match.

The Rig 500 comes in three flavors, and each caters to different budgets. The entry-level $59 Rig 500 model offers the bare essentials, with a single pair of isolating ear cups, while stepping up to the $79 Rig 500HD gets you 7.1 surround sound and a breakaway USB cable.

The 500E we reviewed is the highest-end model, at $149. For the extra cash, you get both isolating and vented ear cups, a removable boom mic, swappable cables for USB and 3.5mm connections, and an ESL-branded design. All versions of the Rig 500 sport the same 40mm sound drivers and modular frame, so you'll be able to swap out parts no matter which model you buy.

The Plantronics Rig 500E is a one-of-a-kind headset that offers an impressive level of customization, and it has the sound quality to back up its fancy features. The ability to swap between different sets of ear cups is both novel and useful, as the headset's pleather and plush sets each have their own unique comfort and performance benefits.

While there's plenty I love about the pre-release model I tested, the success of the 500E hinges on two major factors: the quality of the final version's 7.1 surround sound and how easy it will be to obtain custom headbands and parts for the headset. The latter is especially important, as the 500E is aimed at competitive gamers who want to represent their team colors while staying comfortable in the heat of battle.

If you can live without a choice of ear cups (and eventual surround sound), the Rig 500 will offer the same rich-sounding pleather cans and modular exterior as its big brother, for just $59. However, if you're an enthusiast or pro-level player looking for lots of options in both sound and looks, the fully loaded Rig 500E is worth keeping on your radar.

Mike Andronico is an Associate Editor at Tom's Guide. When he's not writing about games, PCs and iOS, you can usually catch him playing Street Fighter. Follow Mike at @MikeAndronico. Follow us  @TomsGuide, on  Facebook and on  Google+.