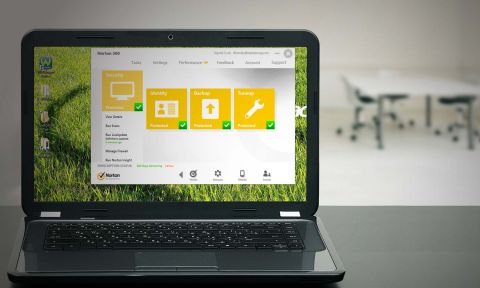 When it comes to anti-virus programs, protecting your PC from malware and Trojans isn't enough anymore. Today's security suites have to include parental controls, identity protection and myriad other features.

That's where Symantec's Norton 360 comes in. With a top-notch protection engine, solid parental controls and robust privacy-protection capabilities, Norton 360 is one of the best anti-virus suites out there. At $89.99 for a year's worth of protection for three PCs, Norton isn't the cheapest option, but this suite is worth it.

Getting Norton 360 on your PC requires a quick download followed by a system restart. When your computer comes back to life, it will automatically install on your system without requiring you to slog through menus and dialogue boxes. And though we prefer how suites from McAfee, Kaspersky and Bitdefender don't require a restart to install, the Norton 360's setup process took just 5 minutes.

Norton offers a clean, easy-to-use home screen that lets you know how well your PC is being protected and when it's susceptible to threats. Up front, you get four large shortcuts to its Security, Identity, Backup and Tuneup tools. Clicking one of the four shortcuts slides them up, revealing additional tools and options.

Above those options are tabs for Norton's Tasks, Settings, Performance, Feedback, Account and Support menus. At the bottom of the home screen is a horizontally scrollable list with links to the Zone, Studio, Manage, Mobile and Family pages.

Selecting the tabs at the top of the home screen opens an extensive list of settings and features for each category, which can be rather confusing and a bit overwhelming to navigate. Clicking the Performance tab causes the home screen to rotate 180 degrees to reveal a panel where you can adjust the software's impact on your system. Clicking the tabs at the bottom of the screen brings up a notification telling you that you have to download the particular feature you're looking for, including the available mobile app, which is a pain.

In addition to its virus-scanning capabilities, Norton 360 offers a variety of tools, including online file backup, a startup manager, registry cleanup and firewall. The software also features Norton's My Network management tool and Norton Insight.

Norton 360's file backup is found under the Backup shortcut and allows users to back up any files on their PC to a local drive or to the Web. You can also schedule backups to occur automatically on a weekly or monthly basis. The software's startup manager lets you choose what programs you want to launch at your PC's system startup. Fewer programs starting at the same time means your PC will boot more quickly.

The registry cleaner can improve system performance by deleting inaccurate registry entries that can slow down or otherwise burden your PC. Norton's firewall lets you set connectivity rules for individual programs, as well as allow or block specific connections. In the same vein is Norton's My Network management tool, which lets you control which devices are connected to your network and will allow or block them as necessary.

We found the Norton Insight tool particularly helpful in determining which processes running on our PC were worth keeping. The feature provides a list of executable files that are not normally included in a standard scan, their trust level, how many Norton 360 users have the same file, how many system resources the file uses and its general stability. Clicking on a file provides you with information about it, including where it came from, if it has performed any suspicious activity, when it was last used and how old it is.

SONAR, or Symantec Online Network for Advance Response, locates potentially threatening files on your PC and matches their behaviors against those of known malicious programs. The tool, Symantec says, allows Norton 360 to find unknown pieces of software that the company has yet to add to its virus-definition database.

To test Norton 360's security performance, we turned to the folks at the AV-TEST Independent Security Institute. The company runs each security suite it tests through a series of benchmarks geared toward determining how powerful the software's protection engine is. When searching for zero-day malware attacks from Web and email sources, Norton 360 found 100 percent of the 110 sample threats the test used.

That showing is better than the industry average of 94 percent, as well as the 89 percent found by Avast! Premier and the 98 percent found by McAfee LiveSafe. Like Norton 360, Kaspersky Internet Security 2014 and Bitdefender Total Security also found 100 percent of the samples.

Symantec offers users a handful of ways to reduce Norton 360's impact on PCs. The aforementioned Norton Insight lets you see which executable files are sucking up the most system resources, while Startup Manager helps you control which programs begin running when you boot your PC. The software's Silent Mode switches off automatic tasks and popups to help cut down on resources, making it perfect for use while gaming.

To test Norton 360's overall system impact, we installed the software on our Acer Aspire E1-470P, which includes an Intel Core i3 processor, 4GB of RAM and a 400GB hard drive. We then ran our OpenOffice benchmark and PCMark7, both of which test a PC's CPU, while running a quick scan, and again while running a full scan.

It took the Acer 8 minutes and 48 seconds to complete the OpenOffice test, which includes matching 20,000 names to their appropriate addresses. That time saw a modest increase to 8:55 while running a quick scan, but jumped to 9:56 while running a full scan.

Norton's Identity Protection tool provides a single place to save your website logins, banking information, mailing address and personal notes. The feature is meant to protect personal information from being stolen by keyloggers and other malicious threats by saving users from having to enter their usernames and passwords every time they access specific sites.

The idea is to help notify users when they are visiting a fraudulent site, thereby preventing them from having personal information stolen. If a site is considered to be safe, the Norton browser toolbar will indicate as much.

The Norton My Family tool, which requires a separate download, is available in both free and premium variants. The free version provides such options as Web supervision, social-network monitoring and a time supervisor, and also stores up to seven days of your child's activity history.

Go for the premium version of My Family, and you can monitor 90 days of your child's activity history, as well as video monitoring, mobile-app supervision and weekly and monthly email reports.

What's intriguing about My Family is that Symantec goes out of its way to tell parents to talk to their children about why they might have certain limits on their Internet and computer usage. It's a solid piece of advice, and something that more pieces of software should do.

My Family not only lets parents block specific websites, but, like Kaspersky, also lets them block sites dealing with certain types of content. For example, you can keep your children from visiting Web pages that deal with gambling, crime, hacking, hate, pornography or online chat.

Conveniently, My Family also lets you manage filters for the top search engines from a single interface, allowing you to turn them on or off with a single click rather than going from search engine to search engine to do the same thing. Overall, we found both Bitdefender Total Security and Kaspersky Internet Security's parental control options better as they allow parents to monitor their children's Facebook activity and block specific games based on their ESRB rating, respectively.

Norton 360 provides a link to the free version of its Norton Mobile Security Android app directly from the suite's home page. What that gets you is essentially a malware scanner on your handset. If you want to get more out of the app, including online backup, antitheft, call blocking and Web protection, you can either upgrade to Norton 360 Multi Device, which covers five devices for one year for $99.99. If you just want to protect one smartphone, however, you can download Norton Mobile Security for $29.99 a year.

With its excellent protection engine, relatively little system impact and myriad features, Norton 360 is a powerhouse anti-virus suite. We were especially fond of the software's Norton Insight tool and exceptional parental controls. However, we give a slight edge to Bitdefender, as it offers a more intuitive interface, doesn't force you to download ancillary features separately and is slightly cheaper. But if you want to take more control over your PC's performance without breaking the bank, the $89.99 Norton 360 is well worth the investment.