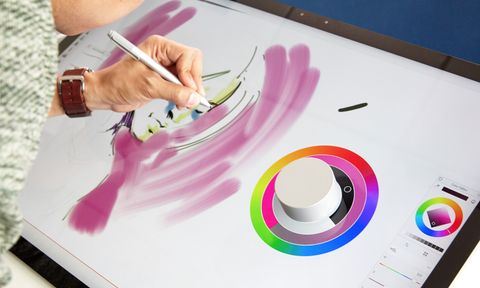 The Microsoft Surface Studio's stunning screen, fantastic stylus support and easy-to-use hinge make this machine the best all-in-one for artists and creators that you can buy.

It's 2017, and you don't need external devices like a Wacom tablet to be a creator anymore. The Surface Studio (starting at $2,999; $4,199 as tested) isn't just a great all-in-one desktop; it's also a creative device that uses a hinge to flatten into a drafting table for art, engineering, architecture or any other setting where a stylus beats a mouse. The screen is gorgeous, and its Nvidia GTX 980M graphics will make for easy Photoshopping. If you can afford the Surface Studio, you'll be rewarded with one of the most versatile desktops on the market. That's why we're naming this system as one of our Best All-in-One PCs.

Your first look at the Microsoft Surface Studio is a wall of pixels. The 28-inch, 4500 x 3000 display is striking, albeit surrounded by a thick, black bezel. The screen rests on a gray base with rounded corners; other than that, it's all screen.

But the magic happens where you can't see. Connecting the monitor to the base is a shiny metal hinge — Microsoft calls this the "Zero Gravity Hinge" — that lets the computer convert from upright all-in-one to an artist's drafting table; it's basically a gigantic tablet.

Switching the Surface Studio between the two modes is truly effortless. One or two fingers pressed lightly against the top of the screen pushes it down, and pulling up from the top of the screen returns it to desktop mode with ease. I was truly surprised by just how easy it was. Zero Gravity Hinge is one of the wackier marketing terms I've heard lately, but it actually rings true.

When used as a huge tablet, the Surface Studio is great for drawing, and it includes the same excellent Surface Pen that you can get with Microsoft's Surface Pro line of hybrid tablets. The pen attaches to a set of magnets on either the right or left side of the screen, so you'll never lose the stylus.

The Surface Studio has a full set of ports, but they're inconveniently located on the back of the base. If you turn the whole computer around, you'll find four USB 3.0 ports, an SD card reader, a headphone/microphone combo jack, a Mini DisplayPort and an Ethernet port.

On the bright side, it's exceptionally easy to turn the computer around. Assuming you have room on your desk, the whole thing just glides with a push or a pull. I understand why Microsoft didn't put ports on the front, as they would be blocked when the display is pulled down. But it would be nice to at least have some easy-to-reach USB ports on the side of the monitor.

The Surface Studio's 28-inch, 4500 x 3000 touch screen ticks all the right boxes: It's vivid, it's accurate and it's plenty bright. I could make out all of the crinkles in a newspaper in the 4K film Tears of Steel, and the blue, purple and green holograms in a lab popped against the gray and black walls.

The display reproduces 181.3 percent of the sRGB color gamut in its default Vivid mode. (In that mode, the display also shows off 100 percent of the DCI-P3 gamut and 94.1 percent of Adobe RGB.) Vivid looks great, but if you want to see a different gamut, there's a switcher in the Action Center. The all-in-one average is 141 percent of the SRGB gamut. The Ideacentre and iMac fell below this average, at 128 and 130 percent, respectively, but the XPS 27 covered more, at 187 percent.

It should be noted that the display doesn't use a standard 16:9 ratio, but instead 4:3, which means that when you bring the screen down to your desk to draw, it feels much more like using a giant piece of paper.

One of the most important components of the Surface Studio is its wide set of accessories: Microsoft's Surface Keyboard, Mouse and Pen.

The mouse is comfortable, albeit simple. It has just two buttons and the scroll wheel, but it feels appropriately weighty in my hand.

The keyboard has cozy chiclet keys and includes a number pad. I managed to type at 115 words per minute on the 10fastfingers.com typing test at my usual 2 percent error rate. The keyboard and mouse each require two AAA batteries (which are included in the box).

The Pen is the same stylus that you'll find with the Surface Pro line of 2-in-1s. This stylus is comfortable to hold and has 1,024 points of pressure sensitivity. As I drew in Autodesk SketchBook, I easily manipulated lines to make them thicker and thinner just by pressing as I drew.

The Surface Pen works in concert with the Dial, the only accessory that doesn't come in the box. The $99 device looks a bit like a small, silver hockey puck. You can use the Dial flat on a table or directly on a pulled-down Surface Studio screen, and use it to change settings in whatever app you're working in. In Windows 10 and in browsers like Chrome, you can use the Dial to change the volume, scroll or zoom in with just a twist. (You bring up the menu to switch functions by holding down on the Dial.) In creative apps like Autodesk SketchBook and Sketchable, you can use the Dial to change colors, adjust the angle of the canvas and switch between tools without taking the stylus off the screen.

I had one of our in-house photo editors — who also happens to have a degree in illustration — try out the Surface with the accessories, and he said it all worked well for him. He said the stylus felt good against the glass, and the pressure sensitivity felt natural, though he also said he had a couple of issues with spotty palm detection. He said the Dial was cool, especially for switching colors, but that he was too used to gestures to use the Dial to adjust his canvas. What he really fell in love with, though, he said, was the Surface Pen and its eraser. Apple doesn't offer a physical eraser with its Apple Pencil for the iPad Pro.

The Surface Studio's accessories all share a similar visual aesthetic: a light gray that is rarely adorned, with the exception of a tiny Windows logo on the mouse where the bottom of your palm goes.

The speakers on the Surface Studio get nice and loud, with crystal-clear sound. When I listened to Zedd and Alessia Cara's "Stay," the vocals layered perfectly on top of the bongo drums, hand claps, rhythmic humming and synths. It was more than enough to get my toes tapping while I wrote in Google Docs.

With its 2.7-GHz Intel Core i7-6820HQ CPU, 32GB of RAM and hybrid storage consisting of a 2TB HDD and 128GB SSD, the Surface Studio is ready for any productivity tasks you can throw at it. I had 45 tabs open in Google Chrome (including one streaming a 1080p episode of Last Week Tonight, and I experienced no lag. With all of that running, I pulled the screen down and started drawing in Autodesk SketchBook with no issues at all. The machine didn't even break a sweat.

Microsoft's all-in-one also has blazing-fast file-transfer speeds. It copied 4.97GB of mixed-media files in just 6 seconds, which translates to a crazy-fast rate of 848 MBps. That's far faster than the 276.7-MBps average and the Ideacentre's score (169.6 MBps), as well as the iMac's showing (401 MBps). The Surface Studio transfer speed is almost exactly double the XPS 27's rate of 424.1 MBps.

The Surface Studio comes armed with an Nvidia GeForce GTX 980M GPU with 4GB of VRAM. It's Nvidia's last-generation GPU, and it's great for graphics editing and even some light gaming.

This all-in-on earned a score of 5.3 on the SteamVR performance test, which suggests a medium-level experience in virtual reality.

The 1080p webcam on the Surface Studio takes sharp, vivid images, but photos can easily be blown out with too much light. In a shot I took in our labs, my red sweater popped against the brown boxes around me, and my eyes looked just as blue as they do in real life. I could make out every individual hair on my head, but the light streaming through the windows (including through some blinds) proved too much for the webcam, which made a lot of the background appear white.

The camera works with Windows Hello facial recognition, so signing in is a snap: Just let it scan your face.

Damn, this thing is expensive.

While every configuration includes the mouse, keyboard and Surface Pen, the Surface Dial costs an extra $99.

The Surface Studio doesn't come with all that much software, and, honestly, that's fine with me. Windows 10 is the star, with Edge as the starter browser and free trials of Office software. There is Surface-specific app appropriately called Surface, which includes tutorials, helps you update Windows and drivers, and lets you customize the Surface Pen's calibration and shortcut button.

Even the maker of Windows couldn't escape a little bloatware. The Surface Studio comes with Windows mainstays like Minecraft: Windows 10 Edition but also includes PicCollage, Sudoku Free, and some productivity focused stuff like Drawboard PDF and Aphalina.

Microsoft sells the Surface Studio with a one-year warranty.

The Surface Studio is a premium desktop made with artists, engineers, architects and other creators in mind. It has a large, radiant display and an innovative hinge that makes this all-in-one the perfect digital substitute for a drafting table.

You need a chunk of cash to pay for it, though. Starting at $3,000 for the base model, the Surface Studio isn't for anyone who has to think twice about spending thousands of dollars on an all-in-one. The Lenovo Ideacentre AIO 910 has a similarly flexible hinge and costs just $1,600. Of course, that machine doesn't come with a stylus and doesn't offer the same precision that the Studio does, but you get what you pay for.

If you already have a Cintiq or other drawing tablet and don't need the Surface's hinge, the $1,400 Dell XPS 27 offers great performance and even better sound, but it's bulkier and has harder-to-reach ports.

But if you want a premium Windows 10 experience with the best stylus and touch screen you can get on an all-in-one, it's no question: The Surface Studio is for you.