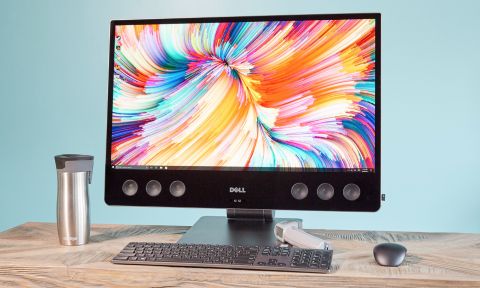 The Dell XPS 27 features a stunning 4K screen and the best sound you can get from an all-in-one PC.

With the XPS 27, Dell has raised the bar for what the term "all-in-one PC" truly means. In addition to packing a gorgeous 4K touch screen within a sleek, flexible chassis, this desktop features an absolutely booming built-in soundbar that rivals dedicated speaker systems. While some minor flaws hold it back, the Dell XPS 27's speedy Core i7 performance, drool-worthy display and best-in-class audio make it one of the best multimedia all-in-ones you can buy.

With its sleek CNC-aluminum frame that houses a huge 4K display and a built-in soundbar, the Dell XPS 27 immediately gives the impression that it's made for serious work and play. This machine is arresting — not just because of the six circular speakers sitting below the screen, but also thanks to the elegant curve of its rear panel and the sturdy, wide base that it rests on. I just wish the base supported wireless phone charging as the HP Envy Curved does.

The XPS 27 is quite flexible, sporting a special articulating stand that allows you to tilt the display 5 degrees forward or 60 degrees backward. You can even adjust the screen so it lies completely flat, which can come in handy for doodling, drawing or simply playing some tabletop touch games with the family. Nontouch versions of the XPS 27 come with a more basic stand that articulates 5 degrees forward and 30 degrees back.

Measuring 24.6 x 17 x 3.16 inches and weighing a hefty 38.2 pounds, the XPS 27 will command a good chunk of your desk space. For comparison, Apple's 27-inch, 5K iMac is taller and wider but also notably slimmer and lighter, at just 0.2 inches thick (at the display) and 21 pounds, while Lenovo's similarly sized, 27.8-pound Ideacentre AIO 910 also has a thinner display but a thicker base that packs all of the machine's ports.

The XPS 27 has more than enough ports to let you get serious work done, though most of them are frustratingly hard to reach. The system packs a handful of essential plug-and-play connections on the edges of the display, with an SD card slot and headset jack on the left and a power button and USB 3.0 port on the right.

Both of the machine's rear ports are tucked away in a small enclave and obscured by the PC's stand. As a result, plugging things in was a cumbersome process of turning the entire all-in-one around and fiddling with the display until I could reach the ports I needed.

Once you get past that roadblock, though, you'll be treated to a wealth of useful connections. The XPS 27's rear panel packs two USB Type-C Thunderbolt 3 ports, four USB 3.0 ports, an Ethernet jack and both HDMI-out and DisplayPort, giving you plenty of options for connecting external monitors and fast-charging gadgets.

With a 27-inch, 3840 x 2160 display, the XPS 27 is the kind of machine you can't help but stop and stare at. The system's default flower-pattern wallpaper grabbed me with its array of rich purples and oranges, and website text looked incredibly sharp and inky, even when I zoomed in all the way.

When I watched the film Tears of Steel, I was stunned by the amount of detail I saw on this 4K display, from the rusty components of a graffiti-laden robot to the individual pores and beard stubbles of the movie's characters. The film's purple and green holograms were so vibrant and crisp, it felt like they were about to jump out of the screen.

The XPS 27 registered an average brightness of 316.8 nits on our light meter, topping the Lenovo Ideacentre AIO 910 (226 nits) and our 252-nit average for all-in-ones. However, it came up short of the ultraluminous 5K iMac (382 nits).

Despite how vibrant it looks during everyday use, the XPS 27 had mixed results on our color tests. The PC reproduced a strong 187.4 percent of the sRGB color gamut, topping the Lenovo (128 percent), the iMac (130 percent) and our 123 percent average.

In addition to looking great, the XPS 27's display was highly responsive to touch. Pinching to zoom on websites was effortless, and the PC had no issues detecting all 10 of my fingers at once as I made some really bad doodles in Paint.

The XPS 27 is easily the loudest all-in-one I've ever used — and quite possibly the best-sounding, too. Packing an integrated soundbar with a total of 10 discrete speakers, Dell's PC not only filled our testing lab with music but also was loud enough to be heard by our development team down the hall (sorry, guys).

When we cranked Bruno Mars' "24K Magic" at full volume, the song's thumping bass was loud enough to make my desk rumble without overpowering Mars' mix of funky crooning and playful rapping.

Dell's desktop was just as impressive for the atmospheric R&B of The Weeknd's "Starboy." I heard every fine detail of the singer's airy vocals as they jumped over smooth synths, and the system's thunderous bass once again had me involuntarily bobbing my head.

The XPS 27 continued to provide crisp, impactful sound when I switched to the alternative rock of Thrice's "Hurricane." The PC's speakers made the guitars absolutely crushing during heavier parts while still allowing me to hear every single note of the softer, arpeggiated verses. As with  previous songs, I could physically feel the wallop of the track's pulverizing drums.

For those interested in nuts and bolts, the XPS 27's speaker system comprises four full-range drivers, two passive radiators for bass and two tweeters to deliver crisp high notes. These are complemented by a pair of down-firing full-range speakers underneath the display that help to envelop a full room with booming sound.

A 4K desktop with great speakers is no good without powerful guts, and I'm happy to report that our XPS 27's Intel Core i7-6700 Skylake processor and 16GB of RAM offered zippy performance across the board. I went through my typical multitasking routine of playing five Twitch streams, performing a system scan, downloading a game and bouncing among about a dozen browser tabs all at once, and Dell's desktop never showed a hint of slowdown.

The XPS 27's AMD RX 470X GPU is strong enough for basic graphics work, and can even handle a few mainstream games at decent settings. The desktop machine ran the Rise of the Tomb Raider benchmark at a playable 31 frames per second at 1080p with the graphics set to medium. However, when we ran our usual 1080p test with all of the graphics maxed out, the PC slowed to a chuggy 12 fps.

The XPS 27's 720p webcam is a bit of a bummer, for a few reasons. First, it's located beneath the display, which keeps the top bezel thin but results in some awkwardly positioned selfies. It's also pretty grainy; although I'd have no problem using this camera for a quick conference call,  I certainly wouldn't rely on it for taking my next Facebook profile photo.

MORE: How to Stream to Twitch

The PC's camera is complemented by quad-array microphones, which proved far more impressive in my testing. The microphones are designed to recognize your voice from up to 15 feet away, which seems pretty accurate based on my time with them. Even when standing about 10 feet away from the PC on the opposite end of our lab, I was able to summon Cortana and ask about the weather and what's on my calendar — and I got accurate responses.

Most all-in-ones ship with fairly plain peripherals, which makes the XPS 27's Premier Wireless Keyboard and Mouse set such a pleasant surprise. These premium wireless accessories (normally sold at $79 for the set) can connect to up to three devices at once, allowing you to switch among multiple PCs — and, in some cases, even mobile devices — with a quick button press.

Dell's Premier keyboard was a joy to use. The keys were soft but still highly snappy, allowing me to breeze through the Key Hero typing test at 90 words per minute with near perfect accuracy and zero discomfort. The peripheral also sports dedicated volume and playback controls, making it perfect for the multimedia-minded XPS 27.

The included mouse offers similarly impressive features, with a slim, curvy design that worked well on most surfaces and extra click buttons on the left and right edges. However, as someone who likes their mice to feel substantial, I wasn't a complete fan of how small and skinny the mouse felt in my hand.

The Premier Keyboard and Mouse provide 12 and 6 months of battery life, respectively, so you shouldn't have to worry about them dying on you quickly.

The XPS 27 is fairly light on extraneous apps. You get Dell's useful PremierColor tool, which lets you flip among color presets optimized for things such as HD video, photos and movies. For sound, the Waves MaxxAudio Pro app lets you tweak audio settings, enable virtual surround sound in headphones, and adjust microphone and recording settings.

The PC comes preinstalled with Dropbox, complete with a free 20GB of storage for a year. You'll also have access to Microsoft's full suite of Office 2016 apps out of the box, though you'll have to get your own subscription once the free trial runs out.

The high-end $2,499 model features a touch display and an articulating stand, as well as more powerful AMD R9 M485X graphics. A $2,699 version of this system includes a beefier 32GB of RAM and a 2TB hard drive with a 32GB SSD.

We reviewed a customized $2,799 configuration, which packs a Core i7-6700 processor, 16GB of RAM, a 512GB SSD and AMD R8 M470X graphics. The system's 4K display and 10-speaker soundbar come standard on every model, so you don't have to splurge to take advantage of some of its best features.

Whether you're a creative professional or just want a PC that makes everything look and sound great, the XPS 27 is one of the best all-in-ones you can buy. This desktop's thunderous built-in soundbar sets a new standard for the category, and its gorgeous, colorful 4K display brings out every fine detail of your movies, shows and photos.

The fact that you can get the XPS 27's stunning 4K screen and integrated soundbar for as low as $1,499 makes it a tremendous value, and splurging for higher models gets you even better performance and a more flexible design.

Apple's iMac with 5K Retina Display ($1,799 starting) has an even sharper and brighter screen, but it doesn't offer a touch option. Lenovo's slick Ideacentre AIO 900 starts at an attainable $1,099, but it gets pricey if you opt for 4K. Overall, the XPS 27 offers the best mix of features for its price, making it a fantastic multimedia machine whose strengths greatly outshine some small flaws.