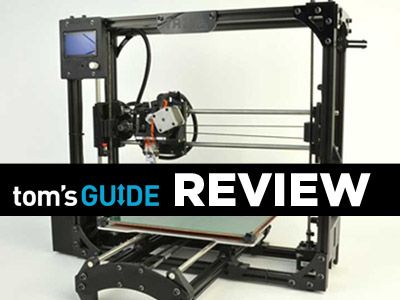 The TAZ 3 is a solid, robust 3D printer that can create good quality prints but it does require a lot of set-up and tweaking.

The TAZ 3 is designed for the serious user who is looking for a flexible 3D printer with a large build volume. Lulzbot uses an open-source design, which means it releases all of its designs and software for anyone to download. You can build your own TAZ 3 if you want, with off-the-shelf parts costing about $950. But that requires a lot of work, plus you'll need to have access to a 3D printer to print the custom parts. The company also sells ready-made versions, so we looked at one of these printers, with a retail cost of $2,195.

The TAZ 3 is built around an open aluminum frame, with a 12 x 11-inch heated glass print bed, covered with a plastic sheet that objects stick to during the print process. Most 3D printers use a print bed that stays still while the extruder moves. On the TAZ, however, the print bed moves forward and backward, and the extruder (which lays down the melted plastic) moves left and right.

This moving print bed and open frame construction does make the TAZ 3 sensitive to drafts: we had no problems printing in a typical heated room, but colder or more drafty areas can cause the plastic to cool too quickly and peel up from the heated bed during printing. Some users have built enclosures that protect the printer, and that may be advisable for office or workshop use, especially when printing at high resolution. This open design also means the TAZ 3 isn't suitable for educational use, as the exposed hot and moving parts of the printer could easily crush or burn a curious onlooker's finger.

This open design does give the TAZ 3 a very large print area, though: it can print a maximum of 11.7 x 10.8 x 9.8 inches, for a total print volume of 1,238 cubic inches. That is considerably larger than the 456 cubic inches of the recently announced (and more expensive) MakerBot Replicator 5th gen (9.9. x 7.8 x 5.9 inches), and much bigger than budget models like the 3D Systems Cube, which has a print volume of 6 x 6 x 6 inches, making a maximum print volume of 216 cubic inches.

The included extruder of the TAZ 3 can work with standard 3mm filament of PLA and ABS plastic (the most common 3D printing materials), as well as the newer wood-based materials. The machine also supports high-impact polystyrene, which is very flexible and safe for items that will hold food. (Lulzbot offers it for about $40 per kilogram.) The TAZ 3 can also print using nylon filament, although this process is still experimental and requires a new surface for the print bed using a material called Garolite, which is available online from several suppliers. We weren't able to test this ourselves, but the results that users have posted in the Lulzbot forums look promising.

Lulzbot has also been experimenting with flexible, rubber-like filaments using a new extruder, called the Flexystruder. Underlining the open-source nature of the TAZ, the company is offering plans for building your own experimental Elexystruder.

Our TAZ 3 printer arrived mostly assembled. All we had to do was follow a simple guide for the final assembly of putting the print bed and base in place, then attaching the extruder and plugging in a few cables. This process is well described in the included Getting Started guide, and requires only one tool: an included 3mm hex driver. We were ready to start printing about 30 minutes after opening the box.

Once this is done, you run a few test prints from the included SD Card to make fine adjustments.  This process took about an hour before we were ready to create our first prints. Just keep in mind that you need to repeat the above calibration steps every time the printer is moved.

The TAZ 3 can be controlled two ways: from the LCD screen on the device, or from a PC or Mac connected to the USB port and using the free Pronterface software. (Wi-Fi is not offered on this printer.) The LCD control does allow you to print from a file on an SD Card (which plugs in behind the screen) and control the printing process. However, the single combination control dial/button and complex menu structure makes the TAZ 3 rather annoying to use.

If you want to stop a print because you noticed that the filament has stuck to the extruder, for instance, you have to click into the menu, then scroll down to the Stop Print option at the bottom of the menu. We would have rather had things like that more quickly available, especially with an exposed mechanism like this.

And if the print is being controlled from the Pronterface software, the pause option isn't available from the LCD: you have to use Pronterface on the PC to pause the print. This is annoying and possibly dangerous if something gets tangled in the mechanism: Anything with exposed moving parts should have an easily accessible emergency stop button.

We did find a few annoying quirks in the TAZ 3 printing process. It produces a fair amount of noise, and there is nothing to damp or block this. The LCD control screen allows you to start a print without the extruder and print bed being warmed up. If you accidentally do this, the mechanism that pushes the filament into the extruder gets jammed up with small chunks of filament, and you have to take the extruder apart to clean them out.

The TAZ 3 print bed is covered with a sheet of PET plastic that the printed material is meant to stick to so prints don't slide around. And that generally works well: we had few problems with prints not sticking. However, this plastic sheet is fragile and easily torn if you try to pry the finished print off the print bed with anything slightly sharp. Lulzbot does sell replacement sheets, though, which cost $30 for five. So tearing the sheet is only a minor issue, and it is preferable to having prints that don’t stick to the print bed.

We found that the TAZ 3 produced high-quality prints, with good detail and clean edges. However, the device required a lot of tweaking to get the best performance, and we found that printing at the highest resolution was especially difficult, with frequent failures. To test 3D printers, we use three models: a scan of the Thinker sculpture by Rodin, a set of tiny gearsand a geometric sculpture that resembles a three-dimensional starburst. All were printed using ABS plastic.

The Thinker sculpture is difficult to print because it has lots of subtle curves and details, which the TAZ 3 did a good job of reproducing. The muscles on the back of the sculpture, for instance, were very smooth and natural looking, as they are in the original. We used the fine quality print setting for this project, with a layer height of 0.1mm (which is finer than most printers in this price class go). The layers were still visible, producing a subtle pattern, but it was less visible than most printers in this class would produce.

This fine quality preset is rather finicky: with each printed layer being just 0.1mm high, the extruder sometimes hits the layer below, causing the printed plastic to move, or in the worst case, stick to the extruder and ruin the whole print.

While this didn’t happen with the Thinker, it did a lot with our third test model (the starburst sculpture), which has lots of edges and sharp corners that are exceptionally difficult to print. We were unable to successfully print the sculpture at the fine resolution setting, although we could print the object using the medium quality preset, which uses a 0.2 mm layer height. This print nevertheless showed a good level of detail, with the multiple surfaces of the sculpture coming out smooth and with clean edges. Some of the tips of the sculpture were a little rough, and some internal surfaces had holes, but such defects are to be expected with such a complex model.

The tiny gears test print also came out well. These don’t require the same thin layers as the other prints, but they do require a carefully controlled print to create the threads and gear teeth that make the assembled mechanism work. Again, we found that the TAZ 3 did well — after several test prints to find the right settings. In particular, we had to tweak the layer height and print speed to stop the plastic of the printed gears from spreading slightly, making the holes smaller than they are meant to be on the bottom. Once we found the right balance, the parts were easy to assemble into the final mechanism, requiring only a small amount of trimming of excess plastic with a scalpel to fit together smoothly.

Most 3D printers require adjustments to get the best results, but the TAZ 3 seems to need more tweaking than most printers. That's partly because of the open construction of the printer, and also because the highest resolution setting requires very precise control: when each layer is just 0.1mm thick, things can go wrong very easily with a slight movement. To use this level of accuracy, you will need to invest a lot of time in experimenting with different settings to get it right. Fortunately, there is a very active (and helpful) community of Lulzbot users on the company's forum.

The TAZ 3 is not a fast printer, especially at the highest quality setting: a 4.25-inch high model of the Thinker took 11 hours and 16 minutes to print. If you don't need that level of detail, though, the TAZ 3 can print much quicker: the same Thinker model took 7 hours and 21 minutes using the fast setting, which increases the size of each level to 0.3mm.

Our starburst sculpture took 7 hours and 13 minutes to print on the medium quality setting, with the model scaled up to be 3 inches high. That's an acceptable speed for a complex model like this, but the TAZ 3 won't win any printing races.

The TAZ 3 is a solid, robust 3D printer that can create good quality prints. To do this, though, requires a lot of setup and tweaking, which might be beyond the patience of some users. So the TAZ 3 wouldn't be a good pick for those who just want to press a button and print: a Replicator 5th Gen or Cube 3 would work out better for those people.

But the TAZ 3 would be a good printer for people who are curious about 3D printing technology and don't mind taking the time for tweaking that getting good results requires. When you get it set up properly, the TAZ 3 can produce impressive print quality.

The TAZ 3 is also more versatile. The MakerBot and Cubify printers are limited to one or two types of plastic, whereas the TAZ 3 can work with additional materials such as Nylon, wood-based filament and many others.

The open-source nature of the TAZ 3 means that it would be a good base from which to explore the many different printing materials that are available, alongside an active community of users experimenting with 3D printing.