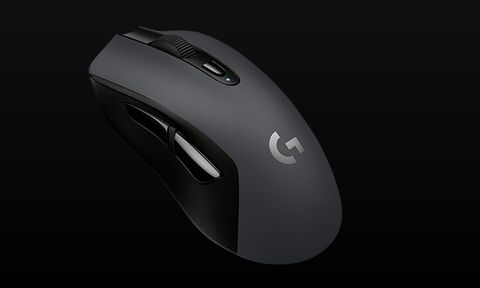 If you want a competent, inexpensive wireless mouse from a company with a sterling reputation for gaming mice, the Logitech G603 is it.

Logitech's Lightspeed technology allows for unprecedented wireless responsiveness and reliability; that's what the company claimed when its PowerPlay mat first came out, at any rate. Since then, the company has released one Lightspeed keyboard and three Lightspeed mice, the latest of which is the G603. The Logitech G603 ($70) is a competent wireless mouse with a comfortable design, a tremendously long battery life and a few helpful bells and whistles.

If you want a competent, inexpensive wireless mouse from a company with a sterling reputation for gaming mice, the Logitech G603 is your best bet. It's not quite as refined or as versatile as the G703 or G903, and if you can stomach a cord, the G502 is still probably Logitech's best mouse. Otherwise, the G603 is an all-around solid choice, even if it doesn't exactly reinvent the (scroll) wheel.

The G603 is a fairly small (4.9 x 2.7 inches) mouse that looks like it'd be equally at home with a desktop or a laptop setup. Although the mouse has neither a thumb rest nor textured sides, it does have an ergonomic design, with a gentle curve on the right side and a steeper curve on the left. The central gray panel on the mouse lifts up to reveal storage space for a wireless dongle, as well as two AA batteries. Unlike some of Logitech's other wireless mice, the G603 can't be used with a USB cable, so whatever you do, don't lose that tiny, tiny dongle.

The mouse has six programmable buttons: a left button, a right button, a clickable scroll wheel, a dots-per-inch (DPI) sensitivity adjuster just beneath that, and two thumb buttons. Everything is pretty much where it's supposed to be. There are also two buttons on the bottom of the mouse. One changes from the default power consumption to a low-power mode for productivity. The other shifts between dongle and Bluetooth connectivity.

There's nothing remarkable about the G603's design, either for good or ill. I found it pretty comfortable, although it's not suited for left-handed players, putting it a peg below the G903.

The G603's biggest draw is its wireless functionality, buoyed by Logitech's Lightspeed technology. The mouse can connect either via wireless dongle or Bluetooth, and function in a gaming mode or a power-saving productivity mode. (You don't really need a 1,000-Hz polling rate or 8,000 DPI when you're typing a document into Microsoft Word or trawling the Internet for Better Call Saul Season 4 rumors.)

Logitech advertises 500 hours of battery life. That's a little more than two months, if you use it for 8 hours a day. We weren't able to use the mouse long enough to confirm this, but the drain seemed in line with Logitech's claims. The only real downside is that Logitech's other mice are rechargeable, obviating the need to waste six (or more) sets of batteries each year. Yes, you could get rechargeable batteries, but this seems like something Logitech should have offered, rather than kicking the can over to the user.

This also means that the G603 doesn't work with Logitech's innovative PowerPlay mat — something that both the G703 and G903 offer. Making a wireless charging peripheral and releasing a mouse that doesn't work with it a month later seems like a confusing decision.

Otherwise, the mouse connects with the Logitech Gaming Software, which is easy to use and intuitive, as always. You can program the buttons, customize DPI, set polling rates, program profiles for individual games and so forth. There's no illumination on the palm rest or scroll wheel, like on many other premium Logitech mice, but for the price (and given the wireless capabilities), there's no real reason for there to be.

Basically, if you want the G603, it'll be for its wireless capabilities. The rest of what it offers, you've seen on other mice.

The G603 tackles pretty much any genre you can throw at it with aplomb. I ran it through Overwatch, StarCraft Remastered, The Witcher 3: Blood and Wine and Marvel Heroes Omega, and the mouse felt responsive and accurate for each one. As far as I could tell, it didn't favor any style of game; it was equally easy to pirouette between bandits as Geralt of Rivia and gun down foes as Reaper.

Gamers concerned about living-room setups have nothing to worry about, as the mouse experienced no lag or lost inputs from 10 feet away. Logitech doesn't give a distance estimate for the mouse, but we tested it with reasonable reliability from up to almost 50 feet away.

The G603 is one of the less expensive wireless mice from a major manufacturer, and it gets the job done. It's comfortable to hold; it performs well across many different genres; and its low-power and Bluetooth options give it some productivity viability as well. If you have enough money to splurge for the versatile G903 or the more refined G703 instead, you probably should; otherwise, the G603 is a fine choice for the competent, everyday gamer who doesn't need anything too fancy.