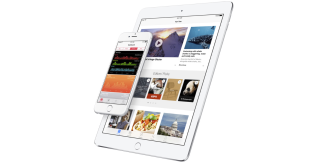 Apple's beta for iOS 9.3 is now available to developers. It won’t be ready for regular folks for another few weeks, but the operating system sports a staggering number of new features that will make this patch the biggest addition to iOS since iOS 9 was released. Here's what's coming.

You will now be able to secure individual notes with a password or fingerprint. This means if someone else is borrowing your phone for a minute, you can still keep sensitive info like bank accounts or a list of passwords hidden from prying eyes.

MORE: 25 iOS Tips, Tricks and Secrets You Need to Know

Physicians often recommend you avoid looking at screens before going to bed because the blue light produced by smartphones and tablets can make it more difficult to fall asleep. Amazon recently added a Blue Shade mode to its Fire tablets to combat this phenomenon. Thankfully, in iOS 9.3, Night Shift will similarly adjust the light produced by screens to be warmer with more yellows and oranges. That way your natural circadian rhythm takes less of hit when viewing screens late at night. Just remember to turn this function off when editing photos, or else people may end up looking like Oompa Loompas.

Apple has improved the recommendation algorithm in the For You section so news stories will be more specifically targeted toward your interests. New stories will also update more regularly, and if a story contains video, you can watch it directly in your feed instead of switching over to another app.

The Health dashboard has been given an overhaul that should make it easier to find third-party apps across categories such as Weight, Workouts and Sleep. The dashboard also will do a better job of displaying info about your movements, exercise, stand data and goals from your Apple Watch, which lets you get a better idea of how you're doing even if you can only spare a quick glance at the app.

For those who own a vehicle that supports CarPlay, Apple is has updated the Nearby feature with more points of interest so it’ll be easier to find a gas station or diner. Also, it will offer better song suggestions in the For You tab in Apple Music.

According to Reddit user MaGNeTiX, Apple's fifth beta for iOS 9.3 now features very explicit warnings for when your phone is being tracked or monitored by your workplace. This should make it much easier for people get assigned iPhone or iPads as work devices to determine when their company's IT department is tracking their device. Additionally, in iOS 9.3, IT departments can use corporate mobile device management (MDM) to set the wallpapers on iOS devices remotely, as well as blacklist apps and enforce notification settings.

A large component of the iOS 9.3 update are new features to help Apple’s mobile devices work better in schools. The most important of these changes is multi-user mode which lets multiple students log into different accounts on the same device. This lets a school equip a single classroom with iPads, instead of needing to buy an iPad for every student. Lessons can be resumed where students left off, and getting into your account can be as simple as finding your picture and entering a four-digit PIN.

A new app called Classroom was created to help teachers. It will let them launch an app on every student’s device at the same time, and control how fast or slow students are allowed to move through the material. Teachers can view what each student is currently working on, so they can get a better handle on how each student is progressing, and can also lock certain apps to ensure students stay on task.