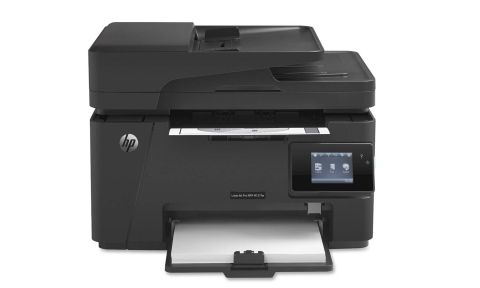 The M127fw delivers consistently high image quality, but its slow performance makes it difficult to recommend.

The LaserJet Pro M127fw ($170) from HP offers all the basic features of a multifunction device at an entry-level price. The prints you'll get are anything but entry-level, but the trade-off for high-quality output is slow performance.

The 3-inch color touch screen on the M127fw promises easy stand-alone operation. There's no control panel extending across the device offering physical buttons — just the touch screen. And that's fine when the screen offers three icons and the selections are simple. But when you enter a menu list, the up/down arrows that appear on the right side of the screen make for clumsy navigation: The down arrow is perilously near the "close" button, making it difficult to select. I wound up repeatedly closing menus by accident instead of navigating to the next page of menu selections.

The icons on the home screen do not include a scanning function. You have to initiate that from a device running the HP software, such as a PC, smartphone or tablet. Similarly, faxing is probably best performed from a PC, considering that the M127fw lacks a 10-key number pad.

The printer measures 16.5 x 14.4 x 12.2 inches, without the input and output trays extended. You won't want those trays hanging out into a high-traffic area. The snap-on input tray extension sticks out 4.25 inches from the front and the fully extended output catch protrudes about 5 inches. Also, you'll want a high clearance, because the platen lid does not have a hinge that will support its weight at low angles – you have to lift it about 90 degrees for the lid to stand on its own.

Printing speed is not the M127fw’s forte. The bright spot is text printing, which the M127fw performed at about the same average speed of 21.9 seconds for laser printers we've tested. The M127fw printed a five-page text document in 22.3 seconds, or 13.5 ppm.

The model printed mixed text and graphics documents at a less impressive clip, printing our six-page document in 58.8 seconds (6.1 ppm) — the slowest pace we've tested. In fact, that's 8.7 seconds slower than the next-slowest monochrome laser model on this test, the Brother MFC-L2700DW. The category average is 40.7 seconds.

The M127fw did not print a full-page photo quickly, either. At 23.7 seconds, it was the slowest time we've clocked, well short of the category average of 16 seconds. Our fastest model on this test, the Samsung M2070FW, spit out the same print at 600 dpi in less than half the time, in 10.8 seconds.

I like the way the HP Print Service app works, which accompanies the M127fw. Rather than having to open a file within the app in order to print it, you can navigate to the file and open it in its native app. Then, you simply select the HP model as the printer.

The M127fw did not redeem itself with its speed at making copies — arguably the second-most important office duty on a multifunction device. The M127fw copied our one-page document in 14.3 seconds, or 4.2 ppm — the slowest time we've recorded for a laser printer on this test. The average is 10.7 seconds.

That may not seem like an agonizing discrepancy, and arguably it would not be if using the automatic document feeder (ADF) significantly sped up the copy speed — which is typically the case in our tests. For example, the speedy Canon MF217w copied single pages at 6.9 ppm and our five-page document in just 22.3 seconds, or 13.4 ppm.

But the ADF on the M127fw is noticeably slow. Making a five-page copy took more than 53 seconds, or 5.6 ppm, which is barely faster than scanning the pages individually.

Scanning speeds were more impressive: The M127fw scanned a document in black-and-white as a 300 dpi PDF in 8.7 seconds, 2 seconds shy of the fastest time. (The average for laser printers is 11.2 seconds). The HP scanned a photo at 600 dpi to JPEG format in 37.8 seconds, which is roughly the category average of 37.1 seconds.

The M127fw delivers top-notch print quality across the board. It printed text with razor-sharp edges and black-and-white graphics with smooth transitions and plenty of detail.

Black-and-white copies retained most of the original's detail, with sharp-looking text and attractive graphics. Even photographs looked quite accurate, with attractively smooth midtone transitions (arguably the most difficult aspect of a photo to reproduce well).

Similarly, scans of a color photo on the M127fw looked attractive, but they lacked some details in shadow areas. Also, reds looked a little oversaturated, making for a slightly unnatural color cast, such as in the sky, which looked a shade purple. The comparably priced (and much faster) Canon MF217w made more natural-looking scans, without losing those shadow details.

HP's M127fw has a simulated resolution mode called FastRes 1200, which is meant to improve details beyond 600 dpi, without being able to print at a true 1200 dpi. However, in the photos I printed at FastRes 1200, I saw no visible increase in quality.

The toner cartridge for the M127fw is rated to print 1,500 pages and delivers a cost per page of 4.3 cents; the average is 4.2 cents for recently tested laser printers. The M127fw is not compatible with a high-yield cartridge, so there's no opportunity to reduce that ongoing cost, as you can with the Canon MF229dw or the Brother MFC-L2700DW.

Setting up the M127fw is simple. You just remove some strands of tape and foam, take out the toner cartridge to remove some protective plastic and slip it back into place.

However, this model is slow to start up. At 36.5 seconds, the M127fw performed the slowest startup we've timed for laser printers. The average is 21.7 seconds.

Putting the M127fw on my wireless network was also easy. I just pressed the WPS button on my wireless router and I was done. About 10 minutes after completing the installation, the browser on my PC launched with a splash screen inviting me to authenticate that my toner was indeed made by HP.

The software included with the M127fw covers the basics for printing, scanning, copying and sending faxes. Separate Windows and Mac installation disks come in the box. The scanning software saves to PDF and JPEG formats, and has presets for attaching each document type to an email. It does not have presets for scanning to a network folder or cloud storage. Also, the scanning software does not perform optical character recognition (OCR) for converting a printed text document into an editable text file.

The M127fw delivers high image quality across the board and average speeds when printing text. But slow graphics printing, slow copying, and a slow ADF limit its versatility. If printing costs were lower than the average, the savings might make it worth the wait, but they aren't.