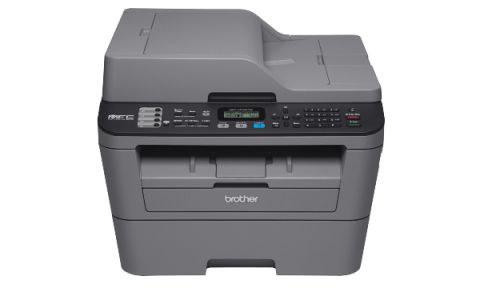 A bargain-priced multi-function printer, the Brother MFC L2700DW ($130) offers the printing, scanning and copying features you'd expect, along with some nice features like an auto document feeder and generous, 250-page paper tray. But the compromise for the low price tag is an MFP that doesn't measure up to the competition in either speed or quality.

A control panel features dedicated buttons for each function as well as navigation buttons for changing settings. You can store up to 10 email addresses in the device for use with the scan-to-email function, and you can access your entire address book via the included software. When you scan to a PC, your native email application launches on your computer, with the scan included in a new email.

You can store eight fax numbers to the one-touch buttons at the left side of the control panel, as well as an additional 200 fax numbers that you access via the number pad. You enter these with the number pad and small screen, which can get tedious since each key represents three or four letters.

The power cord is permanently attached to the MFC-L2700DW, meaning you may face bigger repair jobs than with a removable version. I'd recommend extra caution with the MFC-L2700DW power cord, ensuring it isn't pressed up against a wall or back of a desk.

The MFC-L2700DW may not be the best candidate for an office thoroughbred. It was slower than the 21.9 second average for all-in-one laser printers at printing text and graphics, producing a five-page text document in 26 seconds (or 11.5 ppm).

Printing full-page photos on plain paper was more impressive: The MFC-L2700DW printed our landscape shot on letter-size paper in 15.8 seconds, slightly faster than the average of 16.5 seconds.

All of these tests were performed with a PC connected via USB. Printing wirelessly can significantly affect performance depending on your network. For example, when operating correctly, the MFC-L2700DW printed a five-page text document over my Wi-Fi network in 1:15, or 4 ppm, compared to 11.5 ppm with a USB connection. To get consistent wireless performance, and fix dropped Wi-Fi connections, I had to get a firmware update to the printer and enable IPv6 on my Mac.

MORE: How to Make Your Printer Wireless

Using an Android smartphone, printing a single text page from the MFC-L2700DW took 23.9 seconds, significantly faster than on some other models, such as the HP M277dw, which took roughly a minute to complete the same task. However, as first installed, the printer could not be selected from a document's native application. I had to navigate to the document via the iPrint&Scan app, which I found confusing, not always knowing what folder my document lived in. Downloading the free Mopria app solved this issue, putting the MFC-L2700DW in my list of printers. The iPrint&Scan app was unable to print our six-page PDF, saying the file was too large; I had to open the document with a PDF viewer app and print from there.

As with its text and graphics printing, the MFC-L2700DW's copying and scanning are slower than the average for the laser multi-function printers we tested. It made a black-and-white copy in 12.5 seconds (or 4.8 ppm), a little slower than the average of 10.7 seconds. But using the ADF for copying multipage documents will deliver faster speeds. Our five-page text document copied in 22.7 seconds, or 13.2 ppm.

Similarly, this Brother laser printer scans color documents at slower-than-average speeds, clocking in at 42.2 seconds, or 4.6 seconds slower than the average. The story was the same when scanning black-and-white documents: At 17.5 seconds, the MFC-L2700DW was the slowest model we tested; the category average was 11.3 seconds, while the fastest model (the Samsung M2070FW) made the same scan in 7.2 seconds.

Text documents from the MFC-L2700DW looked as sharp as those from any other model we tested, with heavy letterforms and crisp edges. Black-and-white mixed graphics did not fare as well on Brother's device, with prints showing mild banding in flat areas and lighter text forms than what the Canon MF229dw and HP M277dw produced. Similarly, black-and-white photos printed with some minor banding on the MFC-L2700DW, but looked good overall.

Copies were disappointing, however, coming out much too dark on the MFC-L2700DW and losing many details in dark areas. To make an acceptable facsimile, I had to bump up the brightness by two steps on the control panel; the copy still came out too dark to re-create the details in dark areas. What should have been the solution turned out to be the opposite: Changing from default settings to Quality Photo setting actually added banding to the copy and a grainy, milky appearance that softened all details in the photocopy.

The color scans I made looked good on my computer monitor, with vibrant colors. Details were sharp, though not quite as sharp as the copy made by the Canon MF229dw. Shadow areas lacked some of the details in the original color photo.

The MFC-L2700DW model offers a good deal with its standard-yield cartridge, rated to output 1,200 pages at 3.7 cents per page (almost a penny lower than the average of 4.6 cents). Use the 2,600-page high-yield cartridge, and the cost per page falls to 2.6 cents.

Installing the toner cartridge and setting up the MFC-L2700DW on my wireless network was straightforward. I used the WPS button on my router without having to enter my password on the control panel. In addition, you can use Brother's iPrint&Scan app to perform these functions from an Android phone (as I did) or an iPhone.

Additional supported platforms include Kindle Fire, Windows Phone and BlackBerry. The device can also connect to many cloud-storage services for uploading your scanned files for sharing.

Once set up, a powered-off MFC-L2700DW started up in 19.3 seconds, slightly faster than the nearly 21-second average.

Brother's ControlCenter software performs scanning and faxing. And, as previously mentioned, scanning to email at the device will launch your existing email application on a PC or Mac. In addition, Brother's online CreativeCenter offers many templates for business documents, such as presentations, business cards and letterhead. They're fairly generic templates, but they could be helpful to someone who's starting a home-based business but hasn't set up stationery, letter formats or the like.

The MFC-L2700DW offers a very low cost per page and high text-printing quality. But performance is slower than average across the board, prints with graphics could be more attractive and copy quality is subpar. Still, if text printing is your primary task and you don't need a speed demon, this cost-effective model could be a good fit.