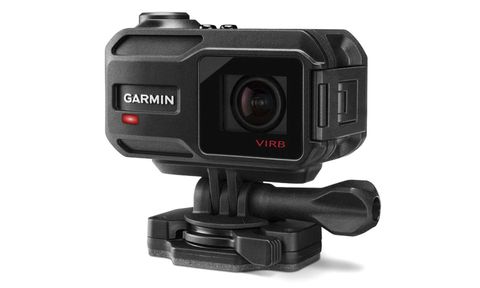 The Virb XE is one of the best-designed and well-equipped action cameras, but it's image quality falls far short of GoPro's.

I had two reactions when I first saw the Garmin Virb XE:

Garmin’s action camera borrows a few design ideas from the category leader, but the Virb is nonetheless a very different camera, and a very innovative one. The Virb XE is waterproof without a case. Its on-device controls are intuitive and easy to reach, even in the fray of action; and it collects a plethora of data – such as altitude and G-force — that you can overlay on the videos to provide a deeper sense of what was happening. The most important job for a camera, though, is to take sharp video, and that's where the Virb XE falls short.

Design and Durability: Up for Anything

What first caught my eye on the Virb XE is the pair of prongs extending down from the bottom of the camera. They are the same size and shape as those extending from GoPro cases, and they attach to a series of mounts very much like GoPro's. In fact, the Virb is compatible with GoPro's own mounts. That may be tacky, but it does provide the Virb access to a huge selection of mounting options: both its own collection, and GoPro's.

The rest of the camera is an upgrade on the GoPro design. The 5.35-ounce Virb XE is waterproof to an extreme164 feet, beating what GoPro's can do even with their cases (131 feet). As such, the Virb XE is the best action camera on the market for SCUBA diving. The camera can operate in a very wide temperature range from -4 to 113 degrees Fahrenheit.

Flipping a latch on the side opens a door on the front of the camera, exposing the lens, microSD card slot and removable battery. What you don’t find here is a micro USB port. Instead, the Virb XE comes with a USB cable that has a special attachment that clips onto a grid of gold-plated contacts on the side of the camera. So if you lose or forget the special USB cable, you're stuck. (A replacement sells for $20.)

The Virb XE boasts a better set of controls than most action cameras. The top of the device features a 1-inch, 128 x 128 pixel monochrome LCD that displays a logically designed menu tree, navigable by two buttons to the right.

Further to the right is my favorite part: the control section for shooting. Instead of pressing a record button, you start videoing by flicking a dial forward. This eliminates that uncertainty when you can't see the camera – say if it's on top of your bike helmet – and you wonder, "Did I hear the beep when I pressed Record?". The dial encircles a large shutter button that you can press any time to snap a still image — no need to change shooting modes from Video to Photo, as with some action cameras.

Unlike the GoPro Hero4 Silver, the Virb XE doesn't have a color LCD touchscreen, the Silver's killer feature. But adding a screen would have made the Virb XE larger, so the trade-off makes sense.

Garmin's smartphone app (for Android, iOS and Windows Phone) is one of the best out there, as extensive as (and rather similar to) GoPro's app. (I tested the app on my iPhone 5.) It provides a live preview and big buttons to start a recording or snap a photo.

Like GoPro's Protune mode, the Virb app has a Pro Settings menu that allows advanced adjustments, such as White Balance (underlying color cast), Sharpness and Exposure Bias (setting autoexposure to skew brighter or darker). It also has a Color Curve control that defaults to Vivid but can be changed to Flat, which video pros prefer as the starting point when they color grade by hand.

The Virb XE can also be controlled from some of Garmin's other gadgets, such as its navigation devices and smart watches.

Having become enamored of the Virb XE’s's design and features, I was heartbroken to see its lackluster video. Shot at 1080p and 60 fps, the clips were unexpectedly muddy. For instance, a rock face I passed during a rafting trip flickered with blocky artifacts from overly aggressive MPEG video compression.

The Virb XE has much better audio than the GoPro Silver, as the latter requires a waterproof case. The GoPro Hero4 Session, however, also doesn't require a case, and its audio sounds as good as the Garmin.

Kodak's $200 Pixpro SP1, though not up to GoPro standards, still displays better image detail than the twice-as-expensive Virb XE does, though its color appears a bit too yellow – a common issue with the Pixpro SP1.

Photos by bright light have a slight dull-gray pallor, as in this view of mountains near Park City Utah.

The GoPro Hero4 Silver shows richer blue in the sky and green in the grass and trees.

The GoPro Hero4 Session goes a tad overboard on the blue – evident not only in the sky but in the deeper shade of green on the mountains — but it still shows a much more pleasant image overall.

The Virb XE's low-light video is serviceable, capturing fairly bright clips during my nighttime ride in Brooklyn. But the video had an overall greenish tint that was unappetizing.

The Virb XE captured the best still images at night, though.

Despite a slight green tint, its image is cleaner looking than one from the GoPro Hero4 Silver.

Both photos are far brighter than what the Hero4 Session can muster.

The Virb's truly unique offering is G-Metrix, a system that collects and overlays data about your journeys onto the video. The Virb XE itself collects GPS, altitude, speed, acceleration and G-force data. Garmin's Virb Edit software (for PC and Mac) can incorporate a plethora of other data points from other sensors, such as heart rate from fitness devices and engine stats (RPM, torque, etc) from automobiles.

In addition to letting you split and trim clips, add transitions and add a soundtrack, Virb Edit allows you to overlay sensor data on your video. By default, it provides overlays for all the data it has on hand.

This clip of my bike ascent to the top of a mountain in Utah, may not look too exciting, given how slowly I’m moving, but the data shows what's really happening. I started the ascent at 6,739 feet above sea level, which explains why this Brooklynite was so out of breath. I ultimately climbed an additional 80 feet during this roughly 2-minute ride, on a grade as steep as 14 percent. The path in the upper-right shows the zigzagging required to make this climb.

This all gives a very insightful look into this segment of my workout, and it would be even more valuable if I had included extra sensors to add data such as heart rate and breathing rate.

Accessories: Plentiful Thanks to GoPro

Garmin provides a respectable set of mounting options for the Virb XE. The basic package includes flat- and curved-bottom adhesive mounts and arms that extend from them to hold the camera in a variety of positions. I could easily mount the Virb XE on either the top or side of my bike helmet.

Garmin also sells the expected assortment of extra mounts, such as a surfboard/waveboard kit, wrist strap, head strap, chest harness and dog harness. Furthermore, the prongs on the bottom of the Virb XE fit perfectly into GoPro's mounting buckles, allowing the Virb XE to use all of GoPro's options.

Beyond mounts, Garmin offers only a modest selection of accessories — most of them spare parts. One that could come in handy is a wireless remote control that allows you to snap a 12-megapixel photo or start and stop recordings without fiddling with the camera, though it's pricey at $50. Garmin also has microphone attachment cables that clip onto the side of the Virb XE, on the same spot where the charger does.

There is so much to love about the Garmin Virb XE. It's extremely rugged, easy to operate and just plain bad-ass looking. The mobile remote-control app is one of the best out there. The ability to incorporate and overlay rich data is not only novel but, once you've seen it, looks likely to be the way that all the best action cams will go in the future.

But the Virb XE is, above all, a camera; and it's just not a great one. Not only do the GoPro Hero4 Silver and Session produce much crisper video, but budget models like the Kodak Pixpro SP1 sometimes do better. I look forward to seeing Garmin up its photographic game to fully realize the potential of its action cameras. For now, either the GoPro Hero4 Silver or Session would be our top choice at this price and level of performance.