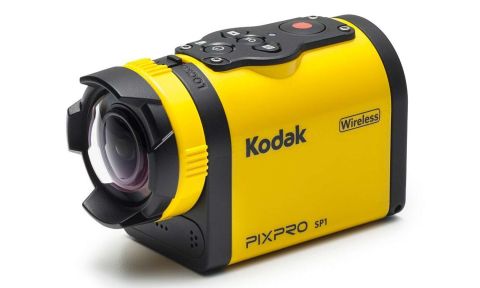 If you don't want to spend a fortune for the best gear, the Pixpro SP1 strikes the perfect balance, of quality, usability and price.

Kodak literally ain't what it used to me. The company dropped its camera division and now just licenses out the name to other gear makers. Generally, such deals don't yield the highest quality, but the Pixpro SP1 ($172.99) is a very pleasant surprise. While it doesn't match the fine image quality of  higher-priced GoPros or Sony cams, this  action camera nevertheless captures nice video and photos. It's also one of the easiest action cameras to operate. The base price is a tad misleading, as it doesn't include any mounting equipment, but even with a mounting package, the Pixpro SP1 is a great deal.

The Pixpro SP1 is the opposite of sexy and looks a bit like a child's toy with its big, boxy yellow design. But the rugged body is built to survive submersion under up to 10 meters (about 32 feet) of water, is dustproof, shockproof against up to a 2M (6.5 foot) drop and freezeproof down to -10 Celsius/14 Fahrenheit.

The Kodak achieves all that without requiring an external housing to its 3.3 x 2 x 1.6-inch casing. At less than half the size, the GoPro Hero4 Silver may seem much smaller, but requires an external case not only for waterproofing but just to provide a mount. In its case, the GoPro grows to about the same size as the Kodak, measuring 2.6 x 1.5 x 2.8 inches. The SP1 is hefty, at 5.4 ounces. With its housing, the GoPro Hero4 Silver weighs about the same, at 5.2 ounces.

To keep from compromising video quality, the SP1 comes with two lens covers – one optimized for underwater shooting and one for above-water clips. Stereo mics below the lens mechanism don't require the covering to be waterproof.

The SP1 has a very rare feature for an action cam (especially a waterproof one): a color screen for previewing shots and displaying menus. The 1.5-inch, non-touchscreen LCD isn't videophile grade, but makes it far easier to navigate settings on the SP1 than on nearly any other camera (save the pricier, touchscreen-equipped—but not waterproof—GoPro Hero4 Silver). Up, Down and OK buttons get you through the menus, which are primitive looking but logically laid out.

Kodak's action cam has a built-in Wi-Fi hotspot for connecting to Android and iOS devices running the company's Pixpro SP1 app. The app allows you to start videos, snap photos and change basic settings like resolution and white balance (as well as view photos stored on the camera).

Looking at both the image samples and the price of the SP1 brought a smile to my face. It's not a GoPro, but for a mere $200, it's a great video performer — easily beating out the equally priced Contour Roam3 and the pricier Ion Air Pro 3.

I shot my action clips while mountain biking in northern California, along a bumpy trail that alternated between woody corridors and meadows. Images were sharp and smooth, despite the camera being limited to 30 fps at full HD 1080p resolution. (Electronic image stabilization helps here. Most action cameras lack this capability.) Highlights--such as a blue sky--were blown out somewhat, and greenery sometimes had a slight yellow cast, but the footage was attractive overall.

It even came  close to the video quality of the $399 GoPro Hero4 Silver.

GoPro's new Hero4 Session camera shoots video of comparable quality to the Silver, and still a notch above the Pixpro SP1. Here's a comparison on a rafting trip in Utah. First the Kodak.

Then the GoPro Hero4 Session.

Still photos taken at 14MP were a tad darker, avoiding blown out highlights, and colors were pleasantly saturated.

Night video taken on a ride through Brooklyn was not only dark, but also blurred and streaked - likely because the Pixpro SP1 couldn't muster a fast enough shutter speed, even though it was shooting at only 30 fps (its max for 1080p video).

The GoPro Hero4 Session captures much brighter and sharper footage.

A still photo of my street was hopelessly dark: Only the streetlight bulbs themselves are visible.

Since most action takes place during the day, and it's impossible for nearly any camera to capture an action night photograph (the shutter speed wouldn't be high enough), the PS1's failings here aren't much to worry about.

Audio from the built-in mics was generally good, without too much wind noise, and voices of cyclists were pretty clear. A wind-noise reduction feature can help out in true gusts. That's all good, since the SP1, unlike some competitors, doesn't provide an external mic jack for a higher-quality pickup.

The Pixpro SP1's removable 1,250mAh battery is rated for approximately 2 hours, 10 minutes of 1080p/30fps video or 350 shots, which should be plenty for a typical outing. (The GoPro Hero4 Silver is rated for 1:50 of video at 30fps.) The camera accepts microSD cards up to 32GB capacity, enough for about 3 hours of video.

Unlike most action cameras, the base unit for the SP1 doesn't have even rudimentary mounting hardware to attach to its bottom tripod screw. But packages with attachments are reasonably priced. For $30, the Explorer pack provides land-based adhesive, handlebar and helmet mounts. An aqua pack that includes surfing options is also just $30. Priced at $50, the Extreme pack includes all Kodak's mounting hardware. You can find all the mounting options on the Pixpro site.

Bottom Line: A Great Choice For Anyone

Whether for biking, surfing, skateboarding or even mellow snorkeling, the Kodak Pixpro SP1 is an unbeatable action camera for the price. Yes, you can get better quality from GoPro or Sony, but you'll pay at least twice as much and probably won't see a big difference in Facebook or YouTube posts. It also beats these rivals in usability. The Sony AS200V lacks a color LCD and full-featured smartphone app, and both rivals need separate, bulky cases to for waterproofing and durability. In short, the SP1 is a very well thought-out product, and great for those on a budget.