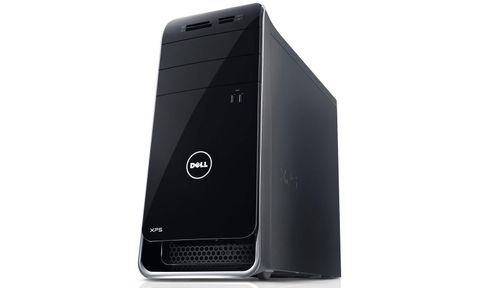 The Dell XPS 8900 SE offers VR-ready gaming performance within an easily upgradable design that's fit for both work and play.

Not every gaming PC has to look like it fell out of some spooky alien vessel. Just look at the Dell XPS 8900 Special Edition ($1,199 starting/as reviewed), which has the unassuming looks of a productivity PC but strong-enough guts for high-end gaming. The XPS' Intel Core i5 processor and GTX 970 graphics card offer a solid starting point for virtual reality, while the PC's easy-to-upgrade design ensures that you'll be able to make this machine even more powerful in the long run. The XPS 8900 isn't the kind of desktop you'll show off to your friends or stick in your entertainment center, but its strong performance and future-proof design make it a winner.

The Dell XPS 8900 SE is the antithesis of an Alienware when it comes to looks, but that doesn't mean this PC isn't sexy in its own right. While Dell's Alienware-branded PCs are known for their glowing lights and sci-fi–inspired architecture, the XPS is an unassuming black box with a glossy front panel and an elegant upward curve along the top.

The PC's front panel sports a sleek, silver border, with a honeycomb-like vent near the bottom. While the XPS lacks the fully transparent side-panel that's practically a standard for modern gaming desktops, there is a small grille on the left side that exposes the green glow of the machine's Nvidia GTX 970 graphics card.

The XPS sports two USB 3.0 ports in the front for quickly plugging in your favorite game pads or peripherals. There are also two USB 2.0 ports, along with headphone and mic jacks in a small enclave at the top panel. These are easy to reach if you have the desktop on your floor.

Unlike most gaming desktops, the XPS sports a whopping four memory-card slots (SM/XD, CF/MD, SD/RS/SDXC and MS/Pro Duo) at the top of its front panel. This gives the sense that Dell's PC is ideal for productivity, just as it is for blasting your friends' heads off in video games.

In the back, you'll find four USB 3.0 ports, two USB 2.0 ports, an Ethernet jack and a full suite of surround-sound audio inputs. For your video needs, there are three DisplayPorts, one HDMI port and a DVI connection on back of the PC's GTX 970 graphics card.

Accessing the XPS' components is a cinch. After removing a single hand screw from the back, you can easily slide off the PC's side panel and gain access to the machine's GPU, fans and storage. You'll need a screwdriver to swap out any of those parts, however.

The XPS 8900 SE can handle mainstream games at high settings with ease, thanks to its Nvidia GTX 970 graphics card with 4GB of VRAM. I jumped, climbed and swam my way through Rise of the Tomb Raider's gorgeous cliffs and rivers at a smooth 60 frames per second, even with the graphics set to high at 2048 x 1536. The system even handled a bit of Tomb Raider at 4K, though I experienced occasional frame-rate drops to below 30 fps.

The XPS ran the notoriously intensive Metro: Last Light benchmark at an impressive 66.7 fps at 4K on low settings. However, the game slowed to an unplayable 13.67 fps with graphics maxed out.

The XPS 8900 SE comes with Oculus' shiny seal of approval, but I ran it through a few VR tests just to be safe. As expected, the PC checked off every box on Oculus' Rift Compatibility Tool, which scans your machine to ensure you have the proper CPU, GPU, RAM and ports for virtual reality.

I also tested the XPS with Valve's more-intensive SteamVR Performance Test, which runs a quick Portal-themed VR demo and rates a PC as Not Ready (Red), Capable (Yellow) or Ready (Green). The XPS landed firmly in the green, with an overall quality of 6.4, a rating that factors in average frame rate as well as graphical fidelity.

Packing an Intel Core i5-6400 processor with 8GB of RAM, the XPS served as an efficient multitasking machine when it was time to put the controller down. The PC performed smoothly no matter what I threw at it, even as I watched seven simultaneous Twitch streams while working in Google Docs, downloading a game on Steam and running a full-system scan.

The XPS ships with the Dell Audio app, which lets you tweak a variety of sound parameters via the MaxxAudio Pro suite. This suite features presets for movies, music, gaming and voice, as well as a special "MaxxSense" setting, all of which made whatever I was listening to sound significantly louder and brighter. You can also change individual settings such as bass, treble and dialog; adjust the bit rate; and pull up an equalizer if you're really looking to fine-tune.

The XPS 8900 ships with a stock keyboard and mouse combo, though you'll probably want to spring for dedicated gaming peripherals if you plan on playing seriously. Neither the keyboard nor the mouse is anything special, though the latter was more impressive than the former.

The included mouse has pretty vanilla features, save for the peripheral's dedicated volume controls. Its square island-keys felt too stiff for my liking; I was still able to run through the Key Hero typing test at a quick 122 words per minute with near-perfect accuracy, but doing so wasn't very kind on my fingers.

I had a better time with Dell's mouse, which seems better-suited to gaming. There are thumb buttons on either side of the peripheral, to which you can map extra controls. There's also a DPI switch in the center that displays the mouse's sensitivity level via a series of LED lights.

MORE: How to Buy a Gaming Mouse

The Dell XPS 8900 SE ($1,119 as reviewed) isn't the flashiest among the current crop of VR-ready PCs, but it's certainly one of the most practical. This no-nonsense desktop sports the Core i5 processor and GTX 970 GPU you need to enter the world of virtual reality, all within a simple, slick design that packs more than enough ports for memory cards and accessories. But the real star of the show is the XPS' hassle-free upgradability, which allows you to pop open the PC in a few seconds and add new parts.

If you're looking for something more stylish (or just don't have much space), the Alienware X51 ($1,119 starting) and Asus ROG G20CB ($1,449 starting) both offer VR-ready performance within supercompact designs. But both of those PC's lack the XPS 8900's upgradability, making Dell's desktop an ideal choice for gamers seeking something they can future-proof.