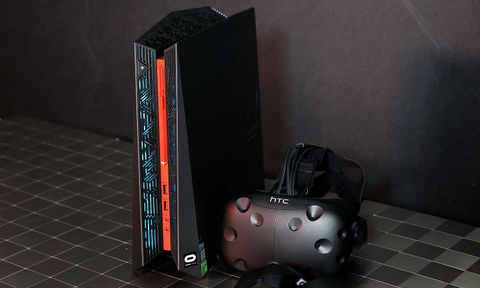 The Asus ROG G20CB has a stunningly compact design with tons of fun lighting options, and it's well equipped for VR gaming.

The Asus ROG G20CB is the type of machine that represents the future of PC gaming. It's tiny, it looks like it was made by aliens and it's specifically designed to handle virtual reality. But while many modern PCs merely mark off those common checkboxes, Asus' PC shatters them, offering a one-of-a-kind design whose sharp angles and glowing lights are as captivating as they are practical. People seeking upgradability or a more TV-cabinet-friendly design should look elsewhere, but in terms of compact PCs built for VR gaming, the G20CB is at the top of its class.

Of all of the sci-fi-inspired gaming PCs out there, the G20CB just might be the prettiest. Thanks to the desktop's strikingly angular side panels and glowing, Mayan-esque etchings, I'm still not totally convinced this machine isn't some magical power source from another planet.

The G20CB's mystifying design isn't just there to look cool; it's also designed to keep the machine cool. With no side-facing vents to break up the PC's slick design, the desktop has a hidden airflow channel near the bottom that's built to allow heat to dissipate naturally.

All of these features are built into a wonderfully tiny 14 x 13.4 x 4-inch chassis that demands very little of your desk space. Asus' PC is slightly larger than compact competitors, such as the Alienware X51 (13.5 x 12.5 x 3.74 inches) and the Origin Chronos (13.75 x 11.75 x 4 inches), but its sleek angles make it inconspicuous. On the other hand, the symmetrical, console-like designs of the Chronos and the X51 are better suited for your entertainment center.

In addition to being completely captivating, the breathing LED lights emanating out of the G20CB are ridiculously customizable. Using the desktop's included Aegis II app, you can individually assign one of 8 million colors to the PC's left, right and bottom-facing lights, as well as set each light to pulsate or glow steadily.

You can also opt to have each zone run through a gamut of colors. There's a ton of freedom here, whether you want a static, all-red look to match the PC's design or prefer the desktop to span every color of the rainbow.

Although customizing the G20's lights is a ton of fun, syncing them to your music is even cooler. Once you enable the Sound Effect feature in the Aegis app, the PC's two front lights become bars of light that bounce up and down based on the rhythm and volume of your PC's audio. As soon as I saw the G20's blue and purple lights thump in unison with Fall Out Boy's "Irresistible," it was hard to look away.

The strip of red in the G20CB's center houses your essential plug-and-play ports, which include two USB 3.0 ports, a DVD-RW drive, and headphone and microphone jacks. In the back, you'll find two USB 3.1 ports, two USB 3.0 ports and two USB 2.0 ports. As a great extra touch, the USB 3.0 and 3.1 ports are labeled with the Oculus logo, so you know exactly where to plug in your Rift. (Don't worry; this rig supports the HTC Vive, too.)

There's also an Ethernet jack, as well as a standard selection of 7.1 channel audio jacks, including line in/out, microphone, rear, subwoofer and side. The system itself sports a single HDMI port, but you can also connect your monitor(s) directly to the HDMI port, DisplayPort and two DVI ports on its Nvidia GTX 970 graphics card.

MORE: The Best Mouse Pads for Your Gaming Mouse

While the G20CB itself is incredibly petite, it does utilize a fairly chunky power brick that requires you to have two free power outlets. (This isn't very common; competitors like the Alienware X51 and the Origin Chronos require only one.) This also isn't a PC designed for tinkerers; with no easy way to remove the system's panels, you'll need to make sure you buy a configuration that you'll be happy using for a long time.

The G20CB's stunning frame houses an Nvidia GeForce GTX 970 graphics card with 4GB of VRAM, which is more than powerful enough to handle modern AAA games at high settings.

Asus' PC allowed me to take in Rise of the Tomb Raider's gorgeous ancient vistas and lifelike character models at 2560 x 1440 on high settings, all while jumping from cliff to cliff at a smooth 45 to 60 frames per second. (Lowering the resolution to 1080p resulted in a consistent 60 fps.) I was even able to push the game to 4K, in exchange for a less smooth 30-fps frame rate.

The G20CB has the Oculus-ready seal of approval, but just to be sure, I ran it through Oculus' Rift Compatibility Check. Unsurprisingly, the PC checked off all of the necessary boxes, packing the GPU, CPU, operating system, RAM and USB ports necessary for virtual-reality gaming.

I also fired up the more intensive SteamVR Performance Test, which runs a PC through a brief Portal-themed demo to determine whether a machine is not ready (red), capable (yellow) or ready (green). The G20CB landed on the green end of the spectrum, obtaining an average quality of 6.1 (which Valve considers high) with zero frame-rate drops below 90 fps. The app's average quality score factors in graphical fidelity as well as average frame rate.

Anecdotally speaking, we used the G20CB as the primary test PC for both our Oculus Rift and HTC Vive reviews, and had no major performance issues with either headset.

Packing an Intel Core i5-6400 CPU with 16GB of RAM, the G20CB was just as apt at everyday computing as it was at face-melting gaming. The PC never slowed while juggling multiple tasks, even as I watched five Twitch streams, downloaded a game on Steam and ran a full system scan.

The ROG G20CB ships with a standard-issue Asus keyboard-and-mouse combo. Both get the job done if you're looking to game right out of the box, though it's probably worth splurging for dedicated gaming peripherals.

The included charcoal keyboard sports red backlighting on the keys and edges, though the lights look a bit cheap, and there's no customization. There are no gaming-centric features, but there is a handy volume knob on the top-right corner. The keys work well enough for a membrane model, allowing me to speed through the Key Hero typing test at 94 words per minute with near-perfect accuracy. Compared to the mechanical keyboard we keep in our lab, though, the keys felt mushy and a bit stiff.

Asus' black-and-red mouse has a nice, ergonomic feel and an accurate sensor that made it easy to navigate games and web pages. However, it lacks extra thumb buttons and a DPI switch — two features that come standard on even the cheapest gaming mice.

In addition to letting you tweak lighting settings, the G20CB's Aegis II software offers a slew of options for system monitoring and game capture. Unfortunately, the app's incredibly minimal interface is a bit unwieldy, and not all of its functions work well.

Let's start with the good stuff. Aegis II makes it easy to keep an eye on your PC's performance load, as well as monitor the temperatures of the desktop's various zones. The app's Boost Launcher tool allows you to program certain apps to automatically close when you launch your favorite games, which can free up some much-needed memory.

The app's GameAlive tool is designed to let you easily capture screenshots and game videos, but it's not nearly reliable enough. While I was able to take screenshots with a quick keyboard shortcut, the app completely crashed every time I attempted to record video. (I experienced this exact issue when using the same software on Asus' G11CD.)

Also, for some inexplicable reason, the Aegis software lets you view a map of the world that highlights the area you're in (you know, in case you forget).

You can get either of these configs bundled with an Oculus Rift for $1,949 and $2,199, respectively, saving you $100 off the cost of buying the headset and PC separately. Those who've preordered an Oculus Rift are also eligible to receive a discount on either model.

With the Oculus Rift bundled in, the X51 bundles cost $1,599 and $1,999, respectively. Alienware's PC is a cheaper gateway to VR, but Asus offers better specs on its highest-end model.

Looks aren't everything, but they're a huge part of what makes the Asus ROG G20CB one of the best compact gaming PCs I've reviewed. Sure, the desktop's otherworldly design will impress your friends, but it will also keep the PC cool and sync up with your music or game audio via cool flashing lights.

The ROG G20CB also delivers on the performance front, with an Nvidia GTX 970 processor that can handle VR (and, in some cases, 4K) gaming. The Alienware X51 will be a bit friendlier on your wallet, but if you're looking for the best combination of design, features and performance, the G20CB is hard to top.