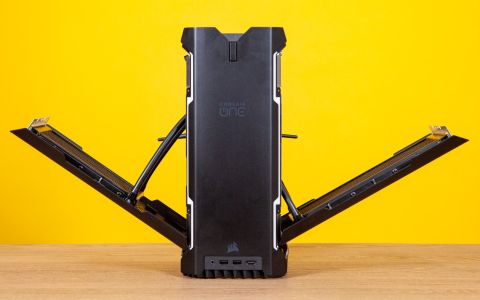 The Corsair One i160 improves on one of the best compact gaming PCs around with blazing components and slick RGB lighting.

How do you improve on one of the best compact gaming PCs out there? Loading it up with more powerful parts and a bunch of RGB lights certainly doesn't hurt. The Corsair One i160 is a subtle but strong refresh of Corsair's debut flagship gaming desktop, packing a blazing Intel Core i9 CPU and Nvidia RTX 2080 Ti graphics into an attractive canister-shaped design that'll barely make a dent on your desk. The One i160 is pricey, and its upgradability options are pretty limited if you're not a serious tinkerer, but it's still one of the best options available for folks who want blazing performance within a small, unassuming design.

Corsair One i160 Configurations and Price

The Corsair One's design hasn't changed all that much for 2019 — and that's a good thing. Corsair's wonderfully compact gaming PC still has the same cylindrical, all-black aluminum chassis, which combines with its two front-facing lighting strips and stylish side vents to create a subdued look that's equally at home in the office as it is in a LAN party.

One welcome change comes in the form of upgraded lighting. The One's static blue lights have been upgraded to all-out RGB strips complete with four lighting zones each, which you can customize to your heart's content in all kinds of dazzling ways thanks to Corsair's iCue software.

You can have the lights glow statically, ooze out every color in the rainbow, or even sync up with your system's temperature, just to name a few options. I was especially fond of the software's Visor setting, which allowed a beam of colorful light to shoot up and down the PC before dancing over to the Corsair keyboard I had connected. You're really only limited by your imagination here.

The Corsair One packs a handful of plug-and-play essentials up front, including two USB 3.1 Type-A ports, an HDMI 2.0a port for easy VR connectivity and a headphone/mic jack.

In the pack, you'll find two USB 2.0 ports, two USB 3.1 Type A ports, a USB 3.1 Gen 2 Type-A port and a USB 3.1 Type-C ports to connecting to the ever-growing swath of USB-C gadgets. Other key connections include an Ethernet jack, a full suite of audio ports, two antennas (for Wi-Fi and Bluetooth 4.2) and three DisplayPort 1.4 connections for hooking your display(s) up to the system's RTX 2080 Ti graphics card.

The Corsair One i160's upgradability has been improved over the original model, but it's still reserved for enthusiasts rather than the everyday PC gamer. You can pop open the top of the PC by holding down a button and wedging off the lid, but from there, you'll have to bust out some tools to get inside the One's vertically oriented design.

From there, you can swap out the system's storage, RAM and GPU, but Corsair does not "guarantee the operation of any upgraded graphics cards." Unless you know your stuff when it comes to tinkering with PCs, you should probably leave the desktop as is.

Don't let its small size fool you — thanks to its monstrous Nvidia RTX 2080 Ti GPU, the Corsair One i160 can tear through modern PC games as well as any gigantic tower can. The system burned through Shadow of the Tomb Raider in 4K with all settings cranked up, allowing me to tussle with a leopard in the gorgeous Peruvian jungles at upward of 72 frames per second.

The One i160 proved just as apt for 4K gaming, powering through Grand Theft Auto V (4K, max settings) at a smooth 45 fps. Once again, Corsair's PC beat out the ROG Strix (28 fps) and the Trident X (35 fps) while just barely missing our 46 fps average.

Unsurprisingly, the Corsair One demolished the 3DMark Fire Strike Ultra 4K gaming test, scoring 8,389 and trouncing the Rog Strix (6,342) as well as our 7,199 average. This VR-ready beast also passed the SteamVR Performance Test with a perfect 11, matching the Trident X and ROG Strix and topping our 9.5 average.

Loaded with an Intel Core i9-9900K CPU with 32GB RAM, the Corsair One made quick work of any combination of tasks I threw at it. The system never slowed down even as I jumped across more than a dozen Google Chrome tabs, watched three Twitch streams and played Shadow of the Tomb Raider all at once. And it stayed quiet under this load, thanks to its custom liquid-cooled internals.

Corsair's PC continued to exhibit strong CPU performance on our spreadsheet test, matching 20,000 names to addresses in 25 seconds. That's about on a par with the ROG Strix and the Trident X, and a few seconds ahead of our 34-second average.

The Corsair One's 480GB SSD copied 5GB of files in a zippy 7 seconds, for a transfer rate of 757 MB per second. That ties the ROG Strix, and tops both the Trident X (424 MBps) and our desktop average (385 MBps) by a wide margin.

The Corsair One i160 improves on an already great compact gaming desktop, delivering speedy Core i9 and RTX 2080 performance within an attractive chassis that stays cool and quiet under pressure. The system's RGB lighting is subtle but insanely customizable, and adds a nice touch of personalization over the original model.

While the Corsair One's upgradability has been improved, it's still  meant to be tinkered with only by serious enthusiasts. And at $3,599, this system isn’t cheap — the similarly compact MSI Trident X gets you the same CPU and GPU for a much cheaper $2,499, and MSI's machine is a bit easier to open up and upgrade. But if you don't mind paying a premium for Corsair's uniquely understated desktop design, you'll find a ton of power tucked inside its tiny chassis.