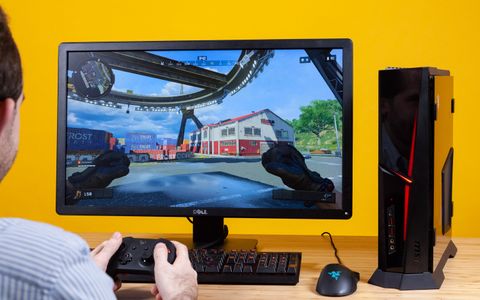 MSI's Trident X desktop blazes through the most demanding games with an intense 9th Gen Core i9 processor and an RTX 2080 GPU. For $2,499 (starting at $1,999), you get all of that power stuffed into a sleek and compact design as well as a keyboard and mouse. While it's held back a bit by its lack of tool-free upgradability, the Trident X is a great overall gaming desktop.

The Trident X sports a very slim and low-profile design — something that doesn't scream gamer, which I can appreciate. The face of the desktop has a black glossy panel sliced into three main parts, which all adorn colorful RGB lighting, and the sides of the face are matte and accompanied by a neat vent grill and an MSI logo.

The right side of the PC features a matte-black panel, but the box includes a heavily tinted glass door that you can replace it with, making it easier to upgrade. Both panels have the MSI Dragon logo and a vent revealing the vibrant RGB-lit fan, but only the matte panel has the Trident logo.

The left side is also a solid matte-black panel, with vents showcasing the GPU, and it's accompanied by RGB spotlights and the intake of the power supply.

The top has a giant, matte-gray vent with a small cutout for the triangular power button, while the bottom is delicately carved to match the tower and point outward.

While most of the parts are upgradable, moving up is kind of a pain, since each panel has two screws keeping it in place. The desktop ships with a glass door that can be replaced on the right side, making future upgrades easier, but the left side doesn't have one. So, no matter how you slice it, it's not tool-free.

The right side gives you access to the CPU, RAM, 12-millimeter fan, power supply and two 2.5-inch hard-drive trays, while the left side features the dual-fan GPU, the back of the motherboard, an M.2 SSD slot and a bracket for the cooler.

The MSI Trident X's Nvidia GeForce RTX 2080 GPU with 8GB of VRAM shredded through Shadow of the Tomb Raider at a silky-smooth 89 frames per second on Highest settings at 1080p, allowing me to bounce around from platform to platform without missing a beat as I attempted to outrun a tsunami.

On the Rise of the Tomb Raider benchmark (Very High, 1080p), the Trident X nailed 91 fps, sailing past the 67-fps gaming desktop average as well as the ROG Strix's RTX 2080 (81 fps). However, the Trident X wasn't as impressive in handling 4K: It hit exactly 30 fps. It did beat the ROG Strix (27 fps) but not the 44-fps category average.

The Trident X's Nvidia GeForce RTX 2080 GPU shredded through Shadow of the Tomb Raider at a silky-smooth 89 frames per second on Highest settings.

The Trident X hit an exceptional 143 fps on the Hitman benchmark (Ultra, 1080p), surpassing the 91-fps category average and getting slightly ahead of the ROG Strix's 139 fps. At 4K, the Trident X averaged 78 fps, outpacing the ROG Strix (73 fps) by a few frames.

Both the Trident X and ROG Strix killed it on the SteamVR performance test with a perfect 11, leaving the 9.6 category average in the dust.

The Trident X's Intel Core i9-9900K CPU with 16GB of RAM offers zippy overall performance, though I did notice some slight slowdown loading images on webpages after bouncing between 45 Chrome tabs and a 1080p YouTube video. Despite that, its performance numbers excelled.

On the Geekbench 4 overall performance test, the Trident X hit a powerful 31,581, crushing the 20,176 gaming desktop average. Despite the ROG Strix's lesser Intel Core i7-9700K CPU, it was nipping at the Trident X's heels with a score of 31,016.

The gap was also tight on our Excel test. The Trident X matched 65,000 names and addresses in 25 seconds, while the ROG Strix did it in 0:24. They both surpassed the 0:34 category average.

On the HandBrake benchmark, the Trident X transcoded a 4K to 1080p in 5 minutes and 38 seconds, which was slower than the ROG Strix's 5:01. Once again, however, both machines defeated the category average (6:43).

While our review unit didn't come with a keyboard and mouse, the retail version does ship with peripherals: specifically, the MSI Interceptor DS4200 ($58) keyboard and MSI Clutch GM10 ($8) mouse. The keyboard has membrane switches and RGB backlighting, while the mouse has a standard pair of clickers, a mouse wheel and a button for DPI.

The Trident X comes with MSI's Dragon Center software which monitors your components and lets you customize your output. The company also includes Nahimic for fine-tuning audio and Mystic Light for tweaking the system's RGB lighting.

The system also comes with epic Windows 10 bloatware games like Minesweeper and Sudoku.

MSI includes a one-year limited warranty with the Trident X.

The Trident X delivers a ridiculous amount of performance in a slim body than can go unnoticed in any setting. It even ships with MSI-branded peripherals like a keyboard and mouse. And while it doesn't offer tool-free upgradability, the Trident X's parts are completely replaceable.

If you want a hot-swappable SSD bay and higher-quality peripherals, however, the Asus ROG Strix GL12CX offers similar performance and graphics with those extra perks. But it's much, much pricier, at $3,299.

Overall, the Trident X is a great gaming desktop that's well-equipped for years of 4K and VR gaming.