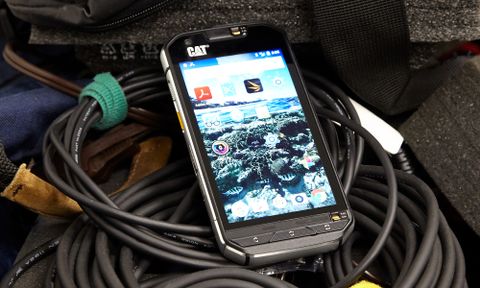 I must admit, I am far from the target customer for the Cat S60 ($599 unlocked), a rough-and-tumble phone made for people like contractors, firefighters and military personnel. After all, I spend most of my workday sitting on an ergonomically padded chair in a climate-controlled building while pressing buttons and looking at a computer screen. The harshest thing I regularly deal with is probably a hangnail that could make hitting the spacebar a tad uncomfortable.

But when it came time to review the Cat S60, I did my best to put the Cat S60 through the wringer. And with its incredible shock and water resistance, this surprisingly stylish yet durable phone came out the other end with flying colors, thanks to its brilliant screen, resilient body and innovative thermal imaging capabilities. The S60 represents a new breed of durable phone that lets you be as tough as a brick without needing to actually look like one.

For a rugged phone, the S60 has a surprisingly sophisticated design. There's a lovely polished metal band that runs around the sides, a sturdy carbon-fiber panel in the back, and reliable physical buttons for Home, Menu and Back on the front. Although there's a big camera bump on top and a bit of extra heft, the S60 looks better than any rugged phone that's come before it, including Samsung's Galaxy S7 Active and its attention-seeking camo paint job.

The side-mounted buttons are big and chunky, so you can still use them easily while wearing gloves. That function extends to the screen; the display also recognizes your digits just fine even when they're wet. Cat has added a handy programmable button on the side, and there's even an SOS button hidden beneath a flap that will turn on a GPS alert system for when you need to call for help. The one downside is that commonly used ports for things such as the microSD card slot and the headphone jack are hidden behind somewhat annoying removable flaps — a frustration you won't encounter on the S7 Active.

A closer look reveals switches at the top and bottom of the phone that are used to increase the S60's water resistance. In normal mode, it's good up to about 6.5 feet, but if you're going any deeper, you'll need to engage both switches for extra protection. Around the back, there are two cameras: a traditional 13-megapixel shooter and the S60's secret weapon — a built-in thermal camera (more on that later). My one real gripe is that I wish Cat had been able to include ac Wi-Fi, as the S60's older 802.11 abgn antenna is already a bit outdated.

You can get the unlocked S60 for $599. However, it does not include support for CDMA bands, so you are limited to GSM carriers such as AT&T and T-Mobile.

Don't let the sleek design fool you; the S60 has rugged cred that's second to none. It has a supertough Gorilla Glass 4 screen, a chassis made to withstand falls from up to 6 feet, and water resistance up to 16 feet for up to an hour.

On top of that, the Cat S60 has a MIL-SPEC 810G rating for protection against vibration, corrosion and more, and an IP68 rating for resistance against dust and water. And for people who work in harsh climates, the S60 is built to work in temps from minus 13 degrees Fahrenheit all the way up to 131 degrees F.

When we tested this phone's toughness, the S60 took on every challenge we threw at it. Apart from a few minor scuffs, it came through our testing unscathed.

The S60 survived multiple 6-foot falls from our Dropbot 5000, a 30-minute swim at the deepest pool we could find (6 feet), and even an hour nap in a freezer. The phone even sent a pop-up notification saying that it had detected the presence of water and that we might experience diminished speaker performance or recharging capabilities until the phone dried out a bit. It's durable and considerate. What more could you ask for?

The hardest part about using a thermal camera isn't the tech or the interface — it's thinking of all the ways you can put it to use. In the case of the Cat S60, you can use it to see where a leak is coming from under the sink or check if your dog lounges on the couch when you're not at home. You can even leave hidden messages by drawing on a wall with an ice cube that, like top-secret files, will disappear on their own.

The thermal camera is based on Flir's Lepton thermal imaging sensor, which can differentiate among temperatures between minus 4 and 248 degrees F. On top of that, the S60 uses data from the normal camera and Flir's proprietary MSX technology to outline shapes while in thermal mode, so instead of just seeing bands of heat, you get a much better picture of your subject and the surrounding environment.

When you open the MyFlir app, you can adjust things like units and the colors of the heat mapping, from simple black and white to the full-on rainbow-colored Predator vision.

In practice, the thermal camera is pretty easy to use. It's just like any other camera app, except that instead of seeing light, you see heat. You can drop up to three measuring points and a larger measuring grid, so there's no shortage of heat info to peep, and snapping a picture is as simple as hitting the shutter button. Flir also says that it will be opening its SDK to third parties, so developers can cook up their own heat-based tools.

The only quirk about the S60's thermal cam is its low 8 frames-per-second refresh rate, which can make the live-view feed jump and stutter. However, this effect is actually a result of government regulations and not a limitation of the tech, so there's not much you can do to fix it.

The Cat S60 has one of the brightest displays we've ever tested, hands down. The 4.7-inch 1280 x 720 screen doesn't just put out a lot of light; it's colorful and accurate, too. With its great outdoor visibility, the S60 made running into Zubats and Oddishes while playing "Pokemon Go" an absolute blast, although I'll admit that's a pretty pedestrian use of a phone this tough. Nonetheless, I still found myself wishing for a sharper 1920 x 1080 display from time to time.

Finally, with its Delta-E rating of 0.63, the S60 showed off pretty impressive color accuracy (closer to 0 is better). We generally consider anything with a rating under 1 to be quite solid.

While it's not a top-of-the-line Snapdragon 820 chip, the S60's octa-core Qualcomm Snapdragon 617 processor, 3GB of RAM and 32GB of storage is more than enough power to keep most apps feeling snappy. You also can add more storage via the S60's microSD card slot; depending on your model, you could also swap in a second SIM card. If you really push it, some games and more resource-intensive activities, such as mobile video editing, can bog down the S60, but that definitely isn't the norm.

When it came to web browsing, the S60's mark of 23.1 on the JetStream JavaScript test once again beat its midrange foes, but it fell far short of the Galaxy S7 (44).

Cameras can't quite see the light

While the resolutions on the S60's rear 13-MP cam and front 5-MP shooter are similar to those on cameras on top-of-the-line phones, the cameras tend to struggle in challenging situations, such as low-light conditions.

Outside at night, the S60 often had a difficult time focusing, and in a shot of some nearby flowers, the Cat produced an underexposed shot with splotchy colors and heavy image noise.

Pictures taken indoors were a bit better. The S60 captured much sharper detail on some chairs and shrubbery, although it's white balance was still slightly off, resulting in a heavy blue color cast.

However, when you compare these photos side by side with shots from a Galaxy S7, you can really see how big the gap is between the S60 and a flagship camera.

Under better conditions, the S60 did a fine of capturing a daytime landscape. While the photo didn't have quite the same depth and richness as a shot taken by the iPhone 6s Plus, the difference isn't that stark.

The S60's endurance is simply epic. On the Tom's Guide Battery Test (continuous web surfing over AT&T 4G LTE), the phone lasted for 12 hours and 42 minutes.

That's longer than pretty much every smartphone we've tested in the past year, including the prodigious Google Nexus 6P (12:25) and its closest rugged competitor, the Samsung Galaxy S7 Active (11:00).

One of the most refreshing things about the S60 was its pretty much unaltered version of Android 6.0. A lot of rugged phones I've used have often been saddled with outdated operating systems because the companies were more focused on durability than on usability.

While there's a bit of bloat — including apps such as AVG, OfficeSuite and File Commander — these apps weren't too obtrusive, and it was easy to uninstall them.

A couple of neat additions include menu settings for configuring what the programmable and SOS buttons do, although the options are limited. You can set the programmable button to open almost any app, but it can't do more complicated tasks, such as turning HDR mode on or off. However, I do appreciate the S60's inclusion of settings for both short and long presses, which adds even more functionality to an already versatile button.

The Cat S60 tops its next-closest competitor, the Samsung Galaxy S7 Active, in almost every way. It's more durable, has a brighter screen, lasts longer on a charge and looks better. At $599, the S60 is cheaper, too. And that's before you even talk about its built-in thermal camera.

Where the S7 Active reigns supreme, however, is its camera, especially for photos taken in low light, as well as its more robust Snapdragon 820 processor. But if I needed to regularly put my tech in unforgiving situations, the S60 is the phone I'd buy.